Why the World Respects Trump More Than the Media

Freedom of speech is one of the most important rights in the United States. In many parts of the world—even Western nations—they do not have the unabashed, unregulated, unrestrained freedom Americans have in voicing their opinions.

I’ve have written in the past how in Europe, there are various limits to speech. Even in the United Kingdom people can be penalized if what they say offends anyone. But such concepts are completely alien in the United States. We can say whatever we like, about whomever we like, wherever and whenever we like.

Although freedom appears to be abused quite often, it is the foundation for a free and democratic society. One of the first things denied in a dictatorship is freedom of speech. People ruled by an authoritarian must be controlled completely. That means they cannot speak their mind, or else they might criticize their leader.

Criticism can lead to actions, like threatening to overthrow or vote out a bad ruler. So, dictatorships rule by fear. Around the world, there are people who can face serious punishment for speaking out against their leaders. Not so in America. Free speech is a vital aspect of our democracy. Without it, we wouldn’t have our nation.

Yet perhaps our freedom of speech, coupled with freedom of the press, has created a toxic environment within our nation. Being free to say whatever we want (especially online) is not just a privilege. As with everything else, it should come with a measure of responsibility.

We all knew that kid who shot his mouth off growing up. More often than not, he got a good smack in the face for his efforts. Were his freedoms being squelched? No, he was just learning you cannot be a smart ass without repercussions (and if you’re wondering yes, that smart ass was often yours truly).

In our modern society, there seems to be freedom without responsibility. Our media is comfortable publishing wild speculation, rumors, and naked bias, with zero accountability. They seem to think they can openly lie without repercussions.

The mainstream media is on borrowed time. We know that. Outlets like CNN, HuffoPo, and the New York Times cannot continue to publish libel and unsubstantiated rumors about our leaders forever and get away with it. We already know that the Times are hemorrhaging money; their only real source of revenue is in renting out their expensive building. There will a come a time soon when they can no longer conduct business.

But in the interim, we have to witness once respectable institutions abuse our most fundamental rights. The result is people—from all walks of life—believing the most ridiculous nonsense.

The irresponsible press and left-wing politicians have been floating all kinds of lies about President Trump. They’ve strung together these ideas with rumors, allegedly leaked stories, and events taken out of context. They have tried to mount a campaign of discrediting Trump with nothing more than hearsay and a healthy dose of speculation.

This has empowered bitter and spoiled Americans to behave is shocking ways. Going back to the election, we saw stupid people acting out. On November 9, only a day after the election, people were protesting Trump’s victory. During the Inauguration, over two hundred people were arrested for rioting in D.C., burning cars and destroying property.

That’s not to speak of the people threatening the Electoral College, rioting against free speech events on campuses, and generally attacking conservatives online.

In the early months of his administration, President Trump has achieved big victories. That includes a strong stock market, increased jobs, a reduction in illegal immigration, and the confirmation of a Supreme Court Justice. However, if you were to believe the media, he is moments away from impeachment.

While we have the freedom—and at times the responsibility—to question and challenge our leaders, the kind of treatment the liberal press has shown to President Trump has been downright shameful. Imagine if they did that to President Obama? Even Fox News was more respectful during his administration.

In fact, a recent study has found that 90% of the media coverage of Trump’s presidency has been negative.

Even “conservative” Fox News only had around 52% positive coverage, which sounds more like a “fair and balanced” approach than everyone else.

Why could that be? Why would the media produce such negative reporting on President Trump? If his actions and results in those 100 days were really that bad—a whopping 90% at the peak—then you’d expect things to be much worse in our country.

We've seen a lot of good come out of his leadership already. Sure, a liberal might be upset about his pro-life decisions and steps to defund Obamacare. But even leftists can’t argue with universally good things like the stock market and jobs. Right?

It’s clear the bitterness of the election and the general liberal bias of the media have motivated them to report in such a way. They have stooped to unprecedented levels of dishonesty.

This is in stark contrast to reality, including how foreign leaders are treating our president. If you were to believe the mainstream media, you’d think America was a smoking crater at this point. Every city would be under siege, and most Americans would be eating their dogs for sustenance. Surely foreign countries, especially Muslim ones, wouldn’t want anything to do with this man.

Once again, we realize that our media have been stoking the flames of fantasy. Trump is doing a much better job than they claim and the world is responding to his decisiveness and plans for America.

It was a notable contrast from President Obama’s last visit to the kingdom, when King Salman delegated the task of greeting the president to a distant nephew, a provincial governor, amid tensions between the two countries over the Iran nuclear deal. (USA Today)

Well that’s a change. You’d think that Saudi Arabia, incensed at all the “anti-Muslim” rhetoric coming from this “Islamophobic” president wouldn’t even give him the time of day. Not only did King Salman greet the President when he arrived, but offered an impressive display of respect for the United States.

Because, as it turns out, the rest of the world isn’t made up of social justice warriors.

President Trump signed some impressive deals that would put billions of dollars into American industries. And while I’m not a fan of doing business with Saudi Arabia, you can’t deny what $110 billion is going to do for our economy.

But why were the Saudi kind and the rest of the Arab leaders assembled so respectful of Trump and his people? In fact, the king shook Melania’s hand, something that is forbidden to do for Muslim men. This, even though she wasn’t wearing the customary head covering. 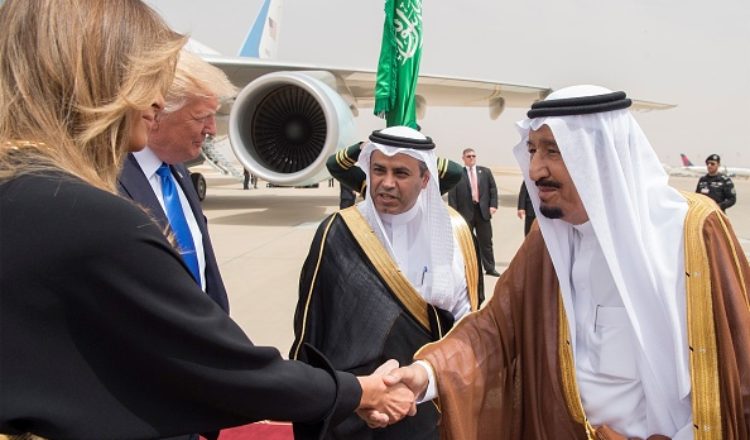 Perhaps it was because these Muslim leaders don’t watch CNN. They’re certainly not reading BuzzFeed or Mother Jones. But maybe it has something to do with the way Donald Trump carries himself. Yes, he is, in fact, a smart man, strong leader, and uncompromising negotiator. Despite the ways the left tries to portray him, he knows what he’s doing.

According to reporters, the president made it clear that not even the press was allowed to bow to the Saudi officials. In fact, anyone that did was getting sent home. No that is not a joke.

Last words from @POTUS before deplaning Air Force One: "I catch one American bowing here and you're on the next Saudia flight home"...

Yes, after eight years of nonsense, we have a president that behaves like your dad. You act up, you break his rules, he’s going to set you straight. That’s a leader even a Muslim king respects.

Recently I speculated on how President Trump would fare in the Middle East. His major goal was to urge the Muslim leaders to get tough on terrorism. If his speech in Saudi Arabia is any indication, he did just that.

His message to the most powerful Muslims in the world was what most Trump supporters would have expected: respectful and at times praising, but also direct and unapologetic. Trump, as the experienced businessman and negotiator, made a compelling argument to the Muslim leaders that it is their responsibility to root our Islamic terrorism from their countries.

Where Obama was apologetic and flattering, afraid to even say the word “terrorism,” Trump was strong on his ultimate goal: wiping it out. He didn’t need to placate these leaders, nor did he dance around the issue. He was honest and direct.

He made it clear that the biggest victims of radical Islamic terrorism were Muslims.

The nations of Europe have also endured unspeakable horror. So too have the nations of Africa and even South America. India, Russia, China and Australia have been victims.

But, in sheer numbers, the deadliest toll has been exacted on the innocent people of Arab, Muslim and Middle Eastern nations. They have borne the brunt of the killings and the worst of the destruction in this wave of fanatical violence.

Some estimates hold that more than 95 percent of the victims of terrorism are themselves Muslim. (Breitbart)

This is the kind of convincing you’d see from an expert lawyer. He was telling these leaders: “Eradicate terrorism. Not because it hurts other nations, but because it hurts your own people more.” By connecting with his audience, Trump worked to win them over.

He smartly made it not a fight between religions, but a threat that violates all faiths.

Every time a terrorist murders an innocent person, and falsely invokes the name of God, it should be an insult to every person of faith.

Terrorists do not worship God, they worship death…

This is not a battle between different faiths, different sects, or different civilizations.

This is a battle between barbaric criminals who seek to obliterate human life, and decent people of all religions who seek to protect it.

This is a battle between Good and Evil.

He then went on to place the responsibility of wiping out terrorism on the Middle Eastern nations gathered there.

Then, of course, Trump drove the issue home with strong, uncompromising words.

A better future is only possible if your nations drive out the terrorists and extremists. Drive. Them. Out.

DRIVE THEM OUT of your places of worship.

DRIVE THEM OUT of your communities.

DRIVE THEM OUT of your holy land, and

DRIVE THEM OUT OF THIS EARTH.

This is the kind of message we have not heard from our leaders in a long time. Terrorism isn’t going away. And while we know it costs countries many lives, it has a ripple effect that damages governments, economies, art and culture, and the development of many nations. By making it the central point of his speech, Trump is connecting the future prosperity of America and Middle Eastern nations with the eradication of Islamic terrorism.

He made no apologies for that and the countries gathered had to listen. Now, will they respond? My guess is that they will.

Compare that to the sniveling, cowardly liberal American media, who continues to attack and vilify our president because they are still butthurt over the election.

You really need to ask yourself just what the left is up to. Politics aside, the future of our country is contingent on the success of our sitting government. By continuing to unjustly attack President Trump, his people, and his supporters, they are only damaging our country. At the very least they are damaging themselves and the idiots who listen to them.

The question is: are you one of them?