President Trump authorized a military strike against Syria late Thursday in retaliation for their chemical weapon attack on civilians earlier in the week. The strike targeted hangars, planes and fuel tanks at one Syrian military airfield according to a US official.

59 Tomahawk missiles were launched from two Navy destroyers in the Mediterranean Sea, hitting the al-Shayrat airfield near Homs, destroying infrastructure, aircraft, and the runway. A US military official said that the munitions were not aimed at people, but the Syrian government announced that there had been six deaths associated with the attack. According to the Pentagon, the Syrian government airbase was the launch point for the chemical attacks that targeted Syrian civilians. This comes just days after a suspected chemical attack in Syria. Dozens of videos and images of civilians, including many children, died in the suspected nerve gas attack on Tuesday in the town of Khan Sheikhoun in Idlib province.

Speaking from his Mar-a-Lago estate in Florida, Trump made a televised statement addressing the attack. “Tonight, I ordered a targeted military strike on the airfield in Syria from where the chemical attack was launched,” Trump said, “It is in this vital national security interest of the United States to prevent and deter the spread and use of deadly chemical weapons.

The president did not formally announce the attacks in advance, but his ominous comments throughout the day Thursday have taken on a darker perspective in hindsight.

“I think what happened in Syria is one of the truly egregious crimes and shouldn’t have happened and it shouldn’t be allowed to happen,” Trump told reporters traveling on Air Force One to Florida. “What happened in Syria is a disgrace to humanity...so something should happen.”  He had stuck his head into the media area and briefly mentioned his feelings on the latest incident in Syria during his preparations for a two-day summit with Chinese President Xi Jinping. Trump is hosting Xi in meetings focused on the threat of North Korea’s nuclear program, so the show of strength and timing of this attack are quite interesting.

The Russians were given advanced warning of the US strike. There were Russians at the base during the strike, although the US did not target any Russian assets, and the two nations communicated all day.

“Russian forces were notified in advance of the strike,” Pentagon spokesman Capt. Jeff David said. “US military planners took precautions to minimize risk to Russian or Syrian personnel located at the airfield. We are assessing the results of the strike. Initial indications are that this strike has severely damaged or destroyed Syrian aircraft and support infrastructure and equipment at the Shayrat airfield, reducing the Syrian government’s ability to deliver chemical weapons. The use of chemical weapons against innocent people will not be tolerated.” It was not clear what the Russians’ roles were at the base.

When asked about potential US strikes before the attack, Russia deputy UN envoy Vladimir Safronov implied that Russia would not be happy with the retaliation.

In response, US Secretary of State, Rex Tillerson, said, “[Russia] would act as the guarantor that these weapons would no longer be present in Syria,” referencing an agreement worked out between former President Obama and Putin to stop Syrian President, Bashar al-Assad from keeping chemical weapon stocks.

This decision, and Trump’s statements regarding Assad are a stark reversal from previous stances. During his campaign, Trump faulted past US leaders for getting embroiled in conflicts in the Middle East. He even took to his famous Twitter to criticize Obama’s military response in 2013, after Assad had launched a sarin gas attack that killed more than 1,000 people near Damascus. Obama stepped back from military action after parliament in the UK, a crucial ally, declined to participate, and support for US action waned.

It seems many lawmakers support Trump’s decision to strike against Assad Thursday night though. Senators John McCain and Lindsey Graham, noted defense hawks and critics of Trump, praised his decision.

“Acting on the orders of their commander-in-chief, they have sent an important message the United States will no longer stand idly by as Assad, aided and abetted by Putin’s Russia, slaughters innocent Syrians with chemical weapons and barrel bombs,” McCain and Graham said in a joint statement. Marco Rubio tweeted out the following to accompany his statement saluting the armed forces who conducted the mission. 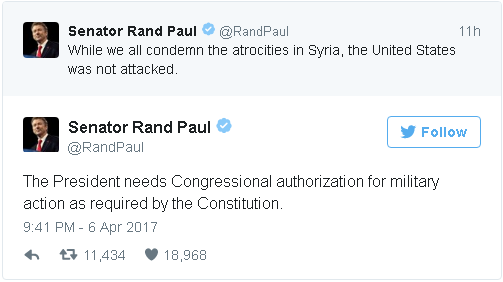 Senator Ben Cardin, the top Democrat on the Foreign Relations Committee, said the action was “a clear signal that the United States will stand up for internationally accepted norms and rules against the use of chemical weapons.” But he also said that “any longer-term or larger military operation” would need to be done in consultation with Congress, a position echoed by House Democratic Leader Nancy Pelosi. It’s rather ironic that they are bringing up the lack of Congress involvement in this decision, because it’s the very same message Trump supported back in 2013. 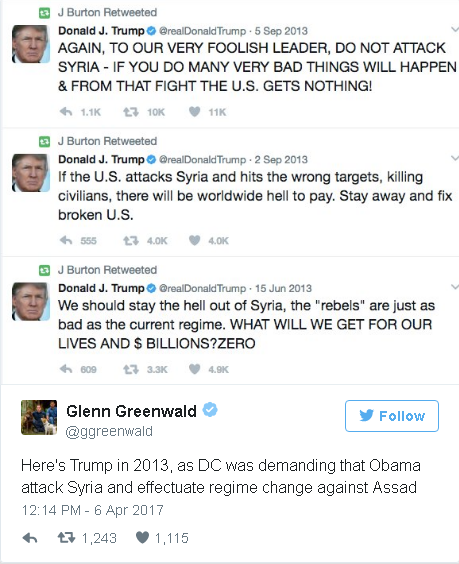 Trump repeatedly tweeted that the US shouldn’t get bogged down in Syria, and that Obama shouldn’t act without approval from Congress. Trump did not receive formal authorization before this missile strike.

Russian President Vladimir Putin has since publicly denounced the US strike, stating that it was “aggression against a sovereign state in violation of the norms of international law.” The Russian Defense Ministry said today that it plans to bolster and increase the effectiveness of the air defense system in Syria following the attack, and that it would suspend an October 2015 agreement aimed at minimizing risks of in-flight incidents between Russian and US-led coalition aircraft. The risk of a direct collision between the US and Russia in Syria has “significantly increased” since the strike, Kremlin spokesman Dmitry Peskov said, adding that the US attack “was carried out for the benefit of ISIS and other terrorist organizations.”

This developing story is a startling revelation. It’s Trump’s first real move in foreign affairs. Although he has advocated for greater counterterrorism, just last week the Trump administration told the press that the US was no longer interested in trying to push Assad from power over the Syrian conflict. Yet here we are, Trump now calling Assad a dictator, describing this recent chemical attack in graphic terms and saying that, “No child of God should ever suffer such horror.”

I just find it rather paradoxical. Although the world is reeling and condemning the most recent actions of Assad, Trump's anti-immigrant rhetoric and repercussions of his travel ban have been discussed far and wide. Are those people not children of God either? Doesn’t he understand that by slamming shut doors- physical and ideological- that this is the reality many are now facing? And Trump’s abrupt turnabout has been largely credited to the disturbing images of the children dying, but truthfully I find his change of heart disturbing.

“I will tell you that attack on children yesterday had a big impact on me--big impact,” were Trump’s words. But it seems more likely that Trump’s shift in perspective is once again driven by public opinion.

His attitude towards Syria has been relatively straightforward: destroying ISIS is the priority, no matter the consequences. Vladimir Putin is a Christian leader willing to use hard power against jihadist Islam, so he’s one of the good guys. The fact that Putin’s been bolstering Assad was an acceptable side-effect to defeating ISIS. But now that the world is seeing these images of sarin gas at work, suddenly Trump has changed his mind.

This, despite the fact that Syrian civil war has been going on for six years. According to a 2016 UN report, there have been 161 chemical attacks in Syria, with UN-documented use of sarin, mustard gas, VX, and chlorine. And Trump’s appointee Nikki Haley’s speech to the UN after Syria’s chemical attack carries striking similarities to the speech of Samantha Power, Obama’s ambassador to the UN.

How did Trump’s shift come about?

If there’s one thing we know, it’s that Trump cares how the world sees him; sometimes a little too much. Trump wants us to see that he cares. This is a president who is obsessed with how he’s perceived, griping about crowd sizes at his inauguration and his portrayal on a late night comedy show. I have yet to see any evidence that Trump has ideological aims other than to win competitions and be liked. He has, after all, donated to both Republicans and Democrats. He supported the Iraq war, then didn’t, then tried to claim he never had. When Americans become conscious of a global incident, he can’t help but respond. One theory about the demotion of Steve Bannon from the National Security Council on Wednesday is that Trump disliked the amount of attention his adviser was getting. Rumor has it that the Washington Post’s piece dubbing Bannon “the most powerful person in the Trump White House” along with the Time magazine cover labeling him as “the Great Manipulator” angered Trump. It seems more likely that the praise and visibility of his UN ambassador’s speech prodded him to take action.

Look, I believe with all my heart that the innocents in Syria need our intervention. But the idea of Trump being at the helm of it all terrifies me more than any terrorist attack. And even though everyone is outraged at the concept of Russian involvement in our election and the Trump administration, the concept of our White House butting heads with Russia can only equal chaos.

The global response to this attack and the Syrian war needs to be measured, discussed and carefully weighed. Trump’s perspective change seems much more rooted in his desperate-for-approval personality, which is constantly shifting and prone to swift, shallow reactions. This reflects the sudden and unexpected nature of this missile strike, the first US attack against the Syrian government. This is too important for another Trump temper tantrum. The response to horrific crimes is too vital to be dictated by one president’s vanity.