On August 10th, a woman was accused of illegally crossing the border of China’s Xin­jiang region into Kazakhstan. The Washington Post reports that Sayragul Sauytbay, a 41-year-old lady of both Chinese-Kazakhstani national status, was a government employee forced to flee the communist nation upon being coerced into working for a state-enforced indoctrination camp.

In court, the woman helped corroborate allegations highlighted in a new shocking U.N. report alleging that the Uighurs population— an ethnically Muslim minority in China’s western Xinjiang province — were being illegally detained in something resembling a “massive internment camp that is shrouded in secrecy.” The investigation from United Nations human rights experts detailed how prisoners were subjected to programs requiring the forced study of communist propaganda, wherein prisoners were expected to praise the nation’s reigning President Xi Jinping and sing songs declaring that quote: “Without the Communist Party, There Would Be No New China.” Failure to comply with the government’s programs reportedly entailed punishment, such as waterboarding among other torture methods declared illegal under international law.

China’s government deny these allegations as a work of fiction, of course. Just ask Hu Lianhe, a senior official with the Chinese government agency overseeing China’s ethnic and religious affairs, who outright said that “there is no arbitrary detention.” His ilk are also enabled by complacent media outlets, of both the East and West, that are printing their we-do-no-wrong state narrative as a headline. But what’s the word of a totalitarian government, known for their continued violation of human rights and liberties, compared to their fleeing refugees?

The Post secured interviews with 20 other Kazakhstani nationals — including three former camp detainees — who made very similar independent claims about life at China’s borders near Kazakhstan, Kyrgyzstan, and Mongolia. Each argued that East Asia’s brutal tradition of forced religious re-education wasn’t just a figment of the past but rather a violent reality, with one million Muslims now held indefinitely in mass government detention.

A recent report from The Intercept notes the population of China’s Uighur Muslims is 11 million, citing statistics derived from DNA extraction that the Chinese government forced nearly all their citizens to comply with by law. That’s a blip in the country’s overall population, yet here we are with one-tenth of this ethnoreligious Muslim minority held in secret camps.

“We are really talking here about a humanitarian emergency,” Adrian Zenz, a specialist on Xinjiang who lectures at the European School of Culture and Theology in Berlin, told The New York Times. “This is a very targeted political re-education effort that is seeking to change the core identity and belief system of an entire people. On that scale it’s pretty unprecedented.” 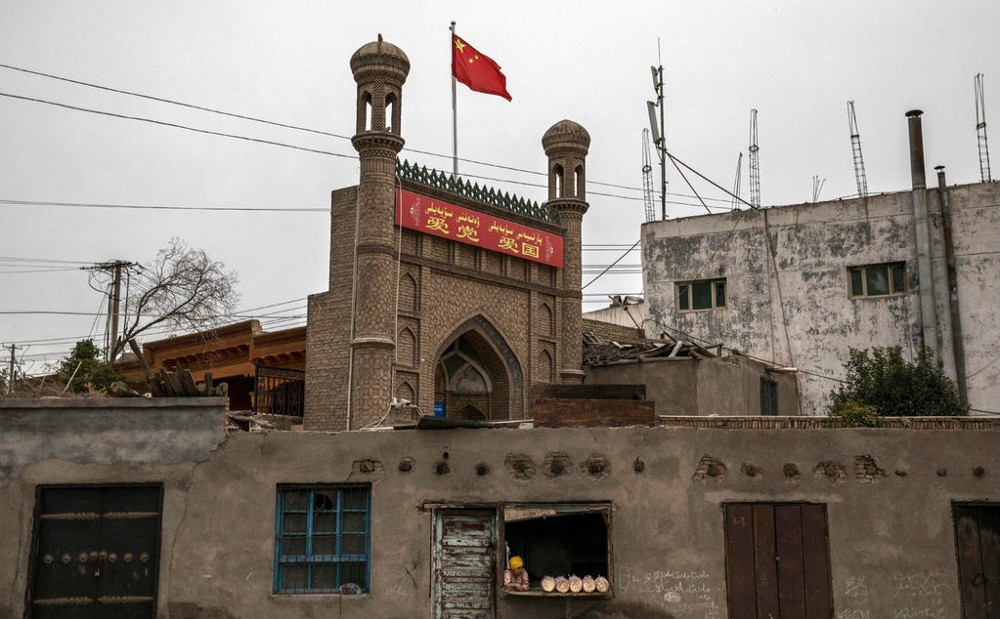 (Xinjiang, China — June 18th, 2017: A Chinese flag flies over a mosque closed and declared illegal by the Chinese government)

“In the name of combating religious extremism and maintaining social stability, [China has turned Xinjiang province] into something that resembles a massive internment camp that is shrouded in secrecy, a sort of ‘no rights zone’,” said Gay McDougall, a member of the UN Committee on the Elimination of Racial Discrimination, in a Geneva speech last week. “We call on China to end their counterproductive policies and free all of those who have been arbitrarily detained,” the U.N. statement concluded.

It’s truly an astonishing display from an unchecked global superpower. Despite all this, it doesn’t have nearly the international response one might expect. Why?

As pointed out by controversial journalist Mehdi Hasan — a man notorious for a certain degree of bias towards his faith — the Chinese government’s actions aren’t just a newly spawned form of bigotry. It’s been happening since 9/11. He cites the 2009 campaign known as “strike hard and punish.” This was a governmental effort during the escalation of the war on terror, where freedom protests from the Uighur population were “stamped out” by the communist regime’s armed forces.

“From the start of November [2009], public security bodies in Xinjiang [went through the] campaign to further consolidate the fruits of maintaining stability and eliminate security dangers,” said the Communist party’s state newspaper, People’s Daily, in their attempted rationalization. These security dangers, in this case, meant any form of religious freedom deemed problematic by the state. In 2016 and 2017, Vox reports their efforts turned to “curbing religious freedom” and “increased surveillance.” Now it’s escalated into detaining millions for their thoughts.

Orwellian China is always watching, it seems. But is the rest of the world?

In his conversation with The Intercept, Amnesty International’s East Asia Regional Director, Nicholas Bequelin, told Hasan this should have been viewed as an international “turning point.” Bequelin continued that “[the Chinese government] is currently engaged in a mass brainwashing operation that requires the detention of hundreds of thousands of people, arbitrarily, outside of any legal framework, in order to subject them to intense political indoctrination, in the hope that this will make them into a more compliant and loyal political entity.”

There are arguments for the need for “de-extremification” of Islamist ideology. There’s a reason why Buddhists haven’t crashed a plane into a building since WW2, while 9/11, organized by Saudi-funded jihadists, is less than two decades old.

This argument, however, falls apart when “de-extremification” is just swapping out one radical ideology for another. Especially when you have no proof that the Uighur Muslim population in China are anything like the radical groups coming out of the Middle East. Of course, as we’ve seen time and time again with China, “radical” means something very different in a country where the defacto political position is absolute loyalty to the state.

“There is no way that China can ensure it has sufficient loyalty from the Uighur people,” Bequelin continued. “[The Chinese will] create a generation with very deep grievances because they are detained outside of any kind of legal framework and they are treated as colonial subjects. [Every colonial project] generates its own anti-colonial project.” In an effort to curb the small jihadist problems in the East, China has potentially just created an aggrieved population nearly a million strong within its borders. This can only lead to good things, I’m sure.