Trump To Stick To His Word On Paris Climate Accord

Donald Trump has decided that America will exit the Paris Climate Accords unilaterally entered into by President Obama in 2016.

Trump authored a Tweet making clear that he is just about ready to reveal his plans regarding the Paris Accords to the public, but multiple sources have confirmed that the decision has been made: America is out. 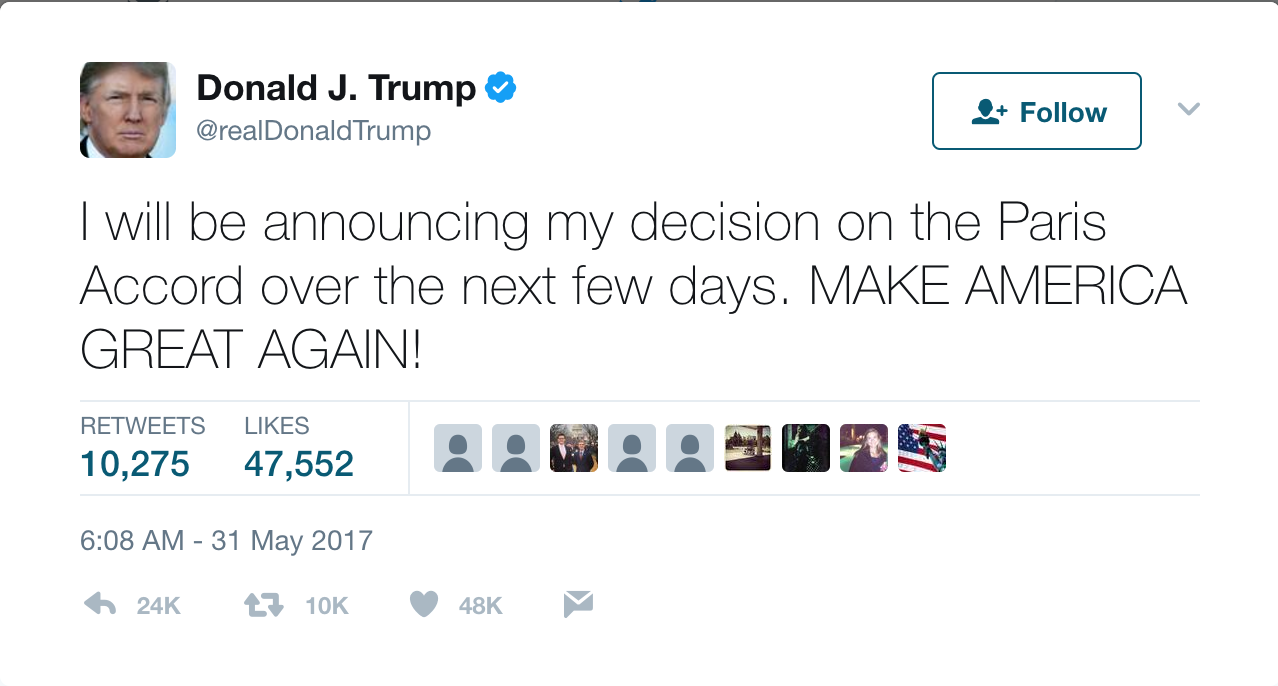 The Washington Times reported that three potential exit options have been discussed, but that the broader decision for America to disengage from the Paris agreement is final. America will have to pay to exit, what form that departure tax will take is likely the key debate being had in the White House, presumably led by EPA Administrator Scott Pruitt.

The Paris agreement was one which neither the American people nor legislators had a say in, a massive burden on future American generations signed onto solely by President Obama. Undoing the ill effects of that one man’s wanton consent in Paris will not be quick nor painless.

While the decision to vacate the Paris agreement was presumably made days, if not weeks or months ago, Pruitt has stated that completing a formal exit from America’s agreed-to obligations could potentially take years. However long it takes, however tedious and contentious the proceedings become, escape from the Paris climate albatross is more than worth it.

I’ll get into the nitty-gritty of how economically stifling and selectively punitive the agreement is, both in America and the developing world.

But first, it must be mentioned that getting America out from under this deal was a prominent campaign promise repeatedly made by candidate Trump. Less than five months into his presidency, he appears to be in the process of following through. Initiating the measures to rid America of this deal so early on in his tenure is no coincidence. For one, it could be a years-long process, as noted, but it is an issue fundamental to America’s future.

It’s economic punishment, particularly for the American poor, in the name of saving the planet. The Paris agreement and modern environmentalism is, quite simply, a wolf in sheep’s clothing.

Leaving aside the fact that climate change, as explained, is far from settled, even among intellectuals. Even if all the greatest minds agreed that the premises supporting climate change are irrefutable, the economic costs of attempting to combat or eliminate climate change would still be worth examining.

Because- and this is irrefutable- the costs of fighting climate change are immense.

Before revealing the massive price tags of environmentalist economics, this premise must be stated:

‘Energy is a key building block for economic opportunity. Carbon-dioxide-emitting fuels, such as coal, oil, and natural gas, provided 87 percent of America’s energy needs in the past decade, and have been the overwhelming supplier for over a century.’ (Heritage Foundation)

But, carbon dioxide, the primary greenhouse gas which climate change supporters aim to eliminate from the atmosphere to whatever extent possible, is a by-product of the energy sources that everybody in the world relies upon to survive.

This is where we face the crux of the issue: we need energy to live. Even in America, where billions of dollars in resources have been put into developing renewable technology, non-carbon dioxide emitting energy sources cannot sustain even a fraction of the population.

Using this carbon-emitting energy for which there is no cleaner, available alternative, puts the earth as we know it in danger, according to the environmentalists.

The cost of finding alternative resources that may or may not be there, while employing punitive laws against companies that rely on traditional carbon-emitting energy sources is measurable. It is measured in higher prices, lower wages, lost jobs, economic stagnation, declining GDP, and potentially lost lives, depending on where you live. Just to name a few of the downsides…

Don’t take it from me, though.

“Americans feel the pain of higher energy prices directly, but also indirectly through almost all of the goods and services they buy, because energy is a necessary component of production and service. Higher energy prices will disproportionately hurt the poorest Americans, who spend the highest percentage of their budget on energy bills.”

When the cost of energy goes up, the cost of everything goes up. Because it is energy that allows us to use many of the tools essential to making money, and living in general.

The cost of making goods goes up, so the producer raises the price of the item to pay for that increase in cost. The price goes up, so people buy less or none of that item, which means less money coming into the shopkeeper’s wallet. Less money in his pocket means he cannot employ more workers, and may not be able to keep existing employees.

As increased energy costs drive goods and services’ prices up, wages are not increasing to match those higher prices. So, people are forced to cut back or go without.

It seems obvious to most that understand these basic economic chain-reactions that policies such as the ones in the Paris agreements have insidious effects on any economy. And for what?

We cannot separate living life, using modern technology that allows for survival, with carbon-emitting energy sources. To simply exist in 2017, humans require the use of these energy sources.

Think about this: the same government that is punishing people and businesses for using carbon-emitting technology has not come up with a true alternative that could replace these traditional fuels, despite investing billions.

This form of global economic punishment for the ghastly crime of using energy to go about our daily activities is not only accepted as a positive phenomenon; the Paris agreement was hailed as a ‘crowning achievement’ of the Obama era.

Here’s how that crown jewel of a unilateral agreement would have likely impacted the American economy, specifically (via Heritage Foundation):

‘Policies adapted from domestic regulations emphasized in the Paris agreement will affect a variety of aspects of the American economy. As a result of the plan, one can expect that by 2035, there will be:

In addition to the vow to decrease America’s carbon footprint as a result of the Paris meetings, President Obama also imposed these sanctions on the American people, which could be expected to have the same basic economic impact as the previously outlined policies (Heritage Foundation):

President Trump is an experienced businessman. But you don’t have to have built hotels to see the bottom line: modern environmentalist policies directly limit economic freedom and the opportunity that any given person has to succeed.

The motives behind inflicting such policies on one’s people are not clear to me. I am only certain that they are based in greed and masked by the lie that more taxpayer money will save the planet.

But the Paris deal was particularly bad for America, further calling into question then-President Obama’s motives.

Despite being the preeminent country in renewable energy investment and technology, we agreed to abide by the strictest standards. While America agreed to reduce its carbon footprint beginning immediately, the countries that wrote the textbook on destroying the environment, such as China and India, were given at least ten years to do the same.

Further, the agreements to reduce greenhouse gas emissions were non-binding, so there was no actual punishment should countries not live up to expectations. This was the definition of a one-sided deal, the standard template for international “accomplishments” under the Obama regime. Whether it was the Iran nuclear deal, the Bowe Bergdahl exchange, or the Paris Accords, there is one common theme: America gets screwed, and the exchanging party doesn’t even have to ask first.

For countries like India, China, and Russia, it makes total sense to join the “agreement.” There is no real punishment for not- as America has done- making true investments in reducing carbon emissions. Even if there were, they could fudge some numbers and get by with their emission count.

Obama didn’t even ask to employ a system of accountability for major world powers who are the very culprits that climate-change legislation should be aimed toward.

There’s no downside for these countries to enter the Paris agreement, and a clear upside: public relations. Say the right things, smile for the cameras, and leave knowing absolutely nothing has changed.

Does anyone believe that China and Russia would incur the self-inflicted economic wounds that come with environmental policy because America did it first? No chance. But what China and Russia did do is allow America to shoot itself in the foot, President Obama chomping at the bit to pull the trigger.

Times have changed. President Trump ain’t perfect, but he is not bereft of basic logic, and apparently, he’s not in on whatever racket is motivating this economically destructive environmental policy lacking in a clear objective.

Naturally, there are critics of Trump’s likely decision to bail on the Paris deal. They range from highly ironic falsehoods:

“China now is producing jobs and economic progress based on solar and wind investments. Other countries will in effect create more jobs and similarly surpass us.”- Sen. Richard Blumenthal, (D-CT)

“Donald Trump has made a historic mistake which our grandchildren will look back on with stunned dismay at how a world leader could be so divorced from reality and morality.”- Michael Brune, Executive Director of environmentalist group Sierra Club

Do you think that they have looked into the effects on kids’ health that occur when mommy can’t buy as much milk as usual because her energy bill, and the cost of everything, is suddenly dominating her monthly budget?

Despite the deliberative, well-thought, statistically-backed analyses of climate legislation that conservatives produce in droves, it’s almost inexplicable how few similarly structured refutations can be found online.

I think we know why there are no statistical refutations; I won’t state the obvious.

For many, there were reasons to worry Trump might waver in his decision to leave the Paris agreement.

“He came here (to the G7 Summit) to learn and he came here to get smarter,” Cohn said. “He did quote say: ‘The environment is very, very important to me, Donald Trump. I care a lot about the environment.'”

And, despite the appearance that America will ultimately remove itself from the Paris agreement, EPA Administrator Pruitt has said that spreading the technology America has invested so much to develop to the rest of the world should be paramount, and that America is not removing itself from the discussion about environmental conservation.

However, any future deal agreed to under Trump, whether environmental or otherwise, will be oriented with America’s needs and interests front and center.

We’ll have to see how the world reacts when America’s most powerful man is no longer pushing an economically crushing agenda based on a false premise. But, for some reason, I wouldn’t put my money on Russia or China unveiling the latest carbon-reducing energy technology anytime soon.