This week President of the United States, Donald Trump, continued his tour of Asia. Plenty of news has come out—and will continue to come out, as he reaches Vietnam—about the announcements and events that transpired during this historic trip. Among the big speeches, photo ops, and other grandiose moments in such a tour, there are a few, smaller things that are worth noting.

In the United States, it’s safe to say Trump is a polarizing individual. While there are legions of Americans who look up to and support the man, there are plenty who do not. Hatred for President Trump by liberals is so intense, it has its own term: Trump Derangement Syndrome. This is the phenomena whereby someone loses their composure, tact, and even basic social skills over anything Trump says or does.

As much as we love this meme (and it will never go away), this is a real thing. Liberals of all stripes seem to melt down over every word Trump says. It’s commonplace. Hatred for Trump is so great among Americans, it’s hard to even consider what other people around the world think of him.

There might even be a bias among Trump-haters that, like good liberals here in America, the rest of the “woke” world despises the man. Despite his reputation as an effective businessman—spanning decades (longer than some of you have been alive)—despite his image as a successful father, and despite his huge persona off his TV show, the people around the world think he’s a joke.

Is that true? Do the people of the world hate Trump as much as the shrieking, triggered snowflakes in the U.S.?

It’s hard to say conclusively. You could probably scan news and social media posts from various parts of the world and get varying results. You could take a poll… but we’ve learned how sketchy those can be.

I would wager that, in many parts of the world, Donald Trump is better respected than liberals at home would claim. Sure, the brain-dead Socialists of Sweden might slander him, but in many places, he’s treated as something of a rock star. We can go back and look at the red carpet treatment he received during his trip to the Middle East. You’d think Muslim nations would hate the man, based on how the media portrayed his rhetoric against terrorism. But nope, they loved him.

That seems to be the case in Japan. While he visited with Prime Minister Shinzo Abe, they hit the links at a golf course in Tokyo. When they decided to stop for lunch, they made a unique choice: hamburgers.

Were the Japanese outraged that they didn’t scarf down some sushi? Were they disgusted at the leaders’ pedestrian choice—claiming Trump was insulting their culture? No, these aren’t liberal Americans. Instead, there was a rush on burger orders. The restaurant became so popular, they sold out. I kid you not.

This Tokyo small business owner is at the centre of attention after his signature burger was selected to be served to the President.

In amongst all the speeches and outings held during Trump’s first visit to Japan as U.S. President, the one thing that stood out for many people was the fact that during his visit to a golf course with the Japanese Prime Minister, the two chose to eat hamburgers.

While some criticised the decision to shun the country’s UNESCO Intangible Cultural Heritage-listed traditional cuisine, others immediately started searching the Internet to find out where they could get their hands on a burger deemed worthy to be served to the U.S. President. (Via SoraNews24)

Yeah, I’m sure at some point Trump had something on that UNESCO list, but when you look at how this chef prepared his burgers… hell, I want one!

The restaurant is called Munch’s Burger Shack, which might be the best name for a burger joint ever. Being selected by a U.S. president as his choice for lunch is a big deal. A very big deal. After it was discovered that President Trump had one of their burgers, customers were coming out of the woodwork to try it for themselves.

The burger that Trump dined on was the “Colby Jack Cheese Burger“, which costs a mere 1,200 yen (US$10.54). At this price, which is significantly less than a night out at Sukiyabashi Jiro where Obama dined during his Japan tour, anyone can afford to try a presidential meal, and that’s exactly what everybody did yesterday, when it was reported that the Toranomon outlet had completely sold out of burgers by 2:30 p.m. (Via SoraNews24)

Demand became so great, they sold out. They’ll probably continue to sell out in the coming days and weeks as word continues to get around. The chef brought the burgers to the leaders themselves. After enjoying his meal, Trump shook the man’s hand and complimented his signature sandwich.

It’s interesting to note the contrast between Trump’s meal and former President Obama’s. I know criticizing Obama at this point is like beating a dead horse, but it does contrast the two men pretty well. Trump has always been a working-class kind of guy. He’s even talked in the past about how the people who like him best aren’t the rich, upper-class elitists, but regular folks. So it comes as no surprise that he’d pick a burger—albeit a gourmet one—over an extravagant meal.

Sure, I bet there are plenty of Japanese citizens who hate Donald Trump. Probably not as many as there are in America, but I’m sure they’re out there. But this single instance shows the kind of influence the man is having, wherever he goes. Even having a burger is such a high-profile event, that people flock to the restaurant to try it out themselves. After all, if it’s good enough for the President of the United States, it’s good enough for me!

Does that sound like the rationale of people who despise a man? Of course not. It speaks to the enthusiasm and interest people around the world have for him. They are eager to learn about what he has planned for America and its allies. They are excited to see him and the Prime Minister golfing, eating, even feeding koi carp (despite CNN’s attempt to smear that moment). It speaks to the true nature of Donald Trump, not some evil, greedy, racist monster the left wants you to see, but a hard-working, competent, and sincere leader. Someone who can do some good for the world. 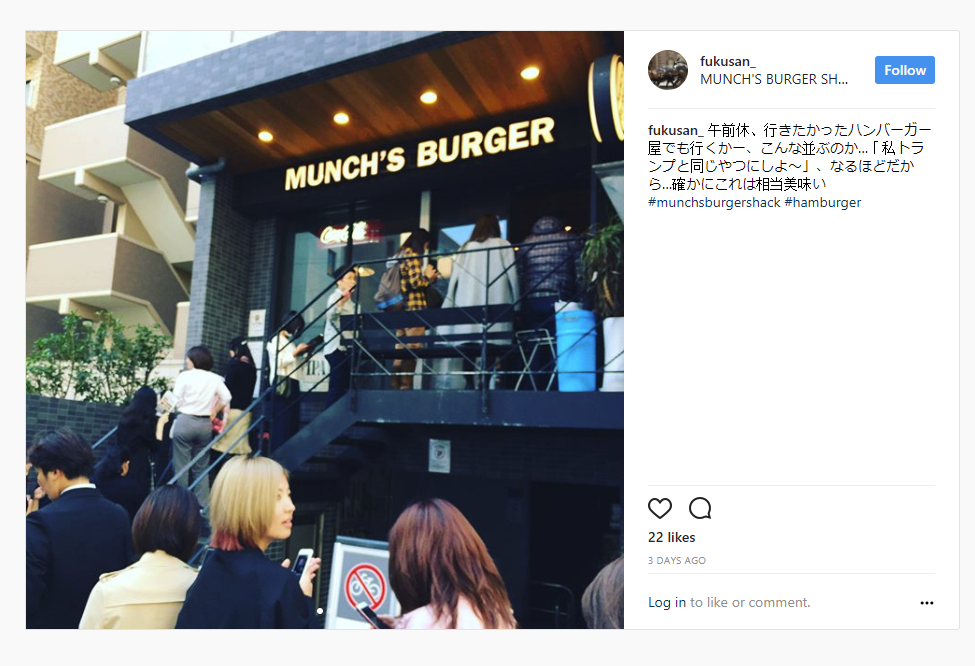