Canadian Prime Minister Justin Trudeau met with President Trump for the first time Monday in a highly anticipated meeting. Given Trump’s constant promises to renegotiate NAFTA and his petulance to public tirades, all of North America- and most of the world- were holding their collective breath at the meeting of two men who stand on opposite ends of the spectrum on almost all aspects of governing a country.

Trump told reporters at a joint news conference that the US would not be significantly changing its trade relationship with Canada, stopping short of calling for a major realignment like he already has with Mexico. It was a development that pleased Trudeau and his Canadians.

“We have a very outstanding trade relationship with Canada. We’ll be tweaking it,” Trump said. “We’ll be doing certain things that will benefit both of our countries. Our relationship with Canada is outstanding. We are going to work together to make it even better...It’s a much less severe situation than what’s taking place on the southern border. On the southern border, for many, many years the transaction was not fair to the United States.”

Trump’s concern with NAFTA has mainly been the US trade relationship with Mexico, which he has frequently accused of stealing American jobs. But Trump appeared to have put on his thinking cap yesterday, letting everyone present know that the US and Canada were stronger when they joined forces in matters of international business, and both countries benefited from having more jobs and trade throughout North America. Trudeau, on the other hand, demonstrated his elite political breeding and skillfully dodged many questions about Canada’s trade relationships as well as his opinion on the actions of the Trump administration thus far.

“There have been times where we have differed in our approaches and that’s always been done firmly and respectfully,” Trudeau said. “The last thing Canadians expect is for me to come down and lecture another country on how they choose to govern themselves.”

With a country who sends 75% of its exports to the US, one can understand how Trudeau had to tread on eggshells on his visit. It appears Trudeau’s support of refugees after Trump’s travel ban had not dampened efforts at establishing a relationship, although Trump and Trudeau appeared visibly uncomfortable with each other. There is the Reuters photo making its rounds on social media that creates a hilarious- if misleading- narrative of how the meeting went. 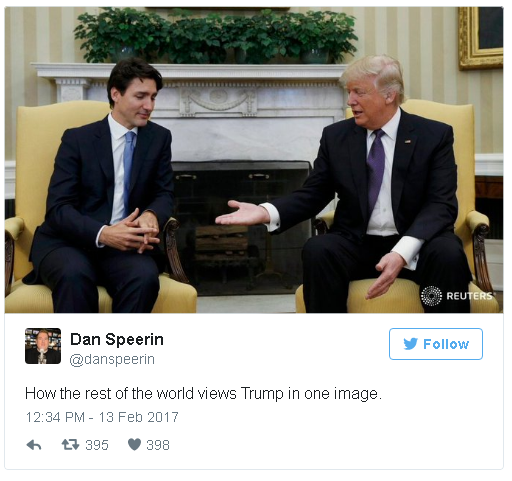 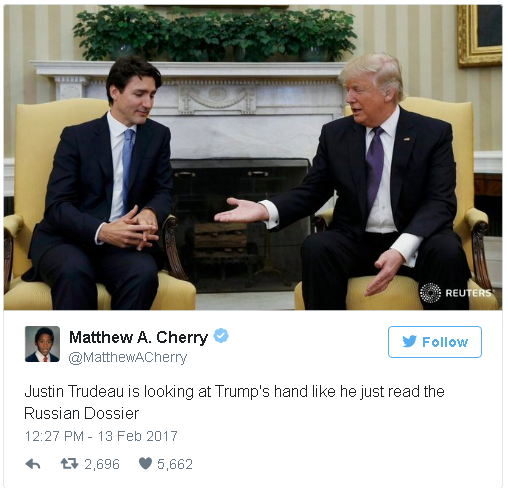 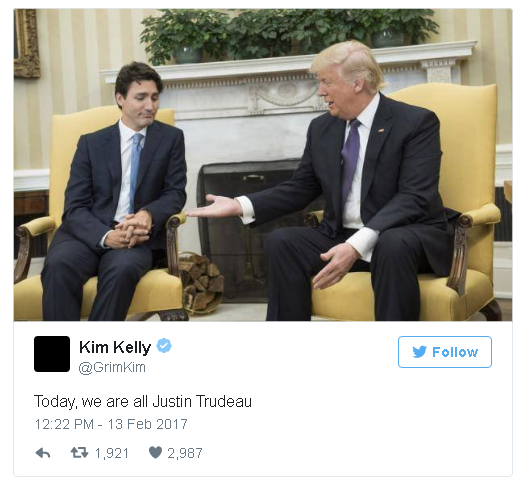 Upon first glance, I felt a solidarity with Trudeau, thinking ‘I feel you, Justin’. The photo, though, was captured in the seconds it took Trudeau to register that Trump suggested a handshake for the photo-op. In fact, Trudeau enthusiastically shook Trump’s hand, documented and analyzed countless times, especially after the viral videos of his uncomfortable handshake with Japanese Prime Minister Shinzo Abe as well as the compilations of his yank-and-pull handshakes.

The meeting went surprisingly well, considering how Trudeau gives the impression of being an immigration-loving, anti-Trumpian progressive. In November 2015, Trudeau’s government rolled out a $678-million plan for Syrian refugee resettlement, where Trudeau personally greeted the first plane of refugees with hugs and tears. Publicly identifying as a feminist at every opportunity, Trudeau often puts his money where his mouth is: he defends women’s right to abortion, and also made it a point to have the first Canadian cabinet that was equally split between men and women (on top of being ethnically diverse). After Trump’s executive order that reinstated the global gag rule, the Trudeau government increased funding to international abortion-related services. With acknowledgment of and plans to combat climate change, as well as public support for the LGBTQ community, Trudeau may very well be the opposite of Trump. With his lack of interest in playing golf, the Canadian prime minister holds no value in the political cross-marketing of Trump-branded golf courses, and is a famous jogging buddy of Mexican President Enrique Pena Nieto- the same Nieto who is at odds with the Trump administration. By all accounts, their differing perspectives means we will never enjoy another US-Canada bromance like we did with Trudeau and Obama.

Pierre Trudeau and Richard Nixon were not kindred spirits either. Nor were Papa Trudeau and Ronald Reagan (though rumor has it the Trudeau kids were fond of the 40th president). But despite all that, an uneasy friendship was formed because the two neighboring countries have economies that are deeply intertwined. By Monday, it appeared that Trudeau and Trump had found common ground on issues like boosting commerce and military cooperation, but that may be the only thing they had in common. Trudeau stressed that jobs and business on both sides of the border depend on trade and an integrated economy.

“We know that by working together, by ensuring the continued effective integration of our two economies we are going to be creating greater opportunities for middle-class Canadians and Americans now and well into the future,” Trudeau said. Pointedly ignoring attempts at a public criticism of Trump, Trudeau appeared the eloquent politician, even demonstrating his bilingualism for a few of the Canadian media outlets. In comparison, asked whether he believes the northern border of the US is secure, Trump replied, “You can never be totally confident.” Clearly, immigration is still a testy subject for both countries.

Overall though, it seems the meeting went well. “I thought it was a huge, huge win,” said Carlo Dade, director of the Centre for Trade and Investment Policy at the Canada West Foundation. “The worst case scenario is we wound up with an Australia moment, when a relationship that should be on solid ground takes a bad turn. Instead, we actually got an endorsement of North American jobs, of Canada-US jobs, working together; no ‘America First’ - just the opposite.”

Details about a tense phone call late last month between Trump and Australian Prime Minister Malcolm Turnbull had created wariness. An unidentified senior US official spoke to the Washington Post and shared that Trump abruptly ended a phone call with Turnbull even though Australia has long been a US ally. But in his meeting with Trudeau, Trump seemed to stick to the script long used by other presidents when discussing Canada.

“Our two nations share much more than a border,” Trump told reporters. “We share the same values. We share the love - a truly great love - of freedom. And we share a collective defense.” Slightly disturbing though, Trump later went on to say that a special friendship is forged when “two nations have shed blood together.”

Yeah, that’s not ominous at all. We have shed blood together, but I don’t know if that’s really a bragging point, Trump. After a roundtable with Trump and Trudeau that featured Ivanka Trump and other female executives, you’d think there’d be better things to focus on, like the new US-Canada council for the advancement of women-owned enterprises.

Nevertheless, from the outside, it appears the two leaders whose parties and world views are diametrically at odds, seemed to have had a cordial meeting that didn’t veer off into the comedic. With a president known for his unpredictability, meandering speeches, falsehoods and Twitter rants, I think we can declare this meeting a relatively roaring success. Where things go from here remains to be seen.