The Trouble In Sweden Is Not Going Away

I am acquainted with several people who- in their younger years- traveled to various countries in Europe. Mostly for business and work, they visited places like France, Germany, Norway, and Sweden over the course of the 70's, 80's, and 90's. All of them had positive things to say about those countries, particularly the Scandinavian lands of Norway and Sweden.

The image many Americans have of Sweden is of peaceful blond people who live in the mountains eating fish. That may have been true at one point. But things have changed.

Perhaps it's this outdated image of Sweden that's made Americans so unwilling to accept what President Trump said on February 19. During a rally in Florida, Trump remarked about the terrible conditions in Europe- including Sweden- thanks to their unregulated acceptance of migrants from the Middle East.

We've seen the terrible things that have been going on in places like Belgium, France, and Germany. For a while now, German citizens have been up in arms over the dangers millions of migrants pose to their country (not that you'd see it reported by the media). But people who pay attention to unbiased media will have known about the conditions in Sweden for a while now. Conditions that lead many citizens to feel they are no longer living in their native lands.

The press tried to eat Trump over his remarks, claiming they were inventions. The press tries to destroy Trump over almost everything he says. Hasn't really worked out, has it? Maybe because the press is using tactics against a man for whom they do not work.

But as CNN and other whore houses criticized Trump for his remarks, the conditions in Sweden swiftly proved him to be correct.

Less than 48 hours after Trump gave his speech, the infamous migrant-populated No Go neighbourhood of Rinkeby was engulfed in violence when several cars were set on fire, shops were looted, and others attacked after police arrested a man in the area. A group of 30 young men also attacked police, who were pelted with rocks and stones; and officers had to retreat to a nearby petrol station to escape the violence. (via Breitbart)

People were shocked to discover that the migrants in Sweden were rioting over a simple arrest. They refused to believe that the EU's disastrous policy of welcoming in hundreds of thousands to millions of strangers all at once, without any guidelines to ensure assimilation, would fail.

But guess what? The riots we witnessed in February are nothing new. This has been going on for years, yet the liberal media at home and abroad refuse to talk about it.

Sweden in flames: As gangs of migrants riot for five nights running.- news not on ABC,NBC, FOX... http://t.co/jnXL0kYrGJ via @MailOnline

Sweden in flames: As gangs of migrants riot for five nights running... the Utopian boats of a multicultural success story turn to ashes. Fifth night of violent riots in Stockholm saw schools destroyed. Over 70 incidents reported overnight including a torched police station. Turmoil began Sunday night after police shot a man in Husby suburb. Incidents in other parts of Sweden spark fear riots are spreading. (via Daily Mail)

That above story, by the way, was from 2013. The referenced tweet was from 2015.  But you never heard about the problems in Sweden until President Trump made an off-handed remark that the liberal media went berserk over.

But don't worry, there's a lot more to go over. I'm not one to beat a dead horse, but when it comes to the safety and security of the Western world, excess in highlighting injustice seems right.

During the Rinkeby riots, left wing major Swedish newspaper Dagens Nyheter sent one of their photographers to take pictures and cover the looting and destruction. He arrived on the scene around 10 pm and was approached by several men who beat him and stole his camera. After escaping and calling the police, authorities told him he would have to make it to a hospital on his own because the area was too dangerous for them. (via Breitbart)

The majority of Muslim migrants from the Middle East and parts beyond living in these No-go zones seemed to have a particular disdain for journalists. Maybe that's because they don't believe in basic freedoms like speech and press. You might remember how the American media were crying during the 2016 election when Trump supporters jeered them during rallies. Even Wolf Blitzer complained about such a hostile environment.

These reporters should spend some time in Sweden to know what oppressing the media is really like.

In Rinkeby, 2:30 PM, several men started masking up and following us. Police told us to leave and had to escort us to our car. pic.twitter.com/Tgm2eCSIaj

We weren't filming anyone, we were just talking to police. They started getting nervous as men started masking up around us. pic.twitter.com/FVAXHrtJtK

Tim Pool was told by Swedish police to leave the area because the police couldn't keep him safe. Men were gathering, wearing black masks, ready to cause harm to Pool and his crew.

This is hardly the peaceful, welcoming Sweden my friends and colleagues remember from years past.  It is a nation that has foolishly allowed destructive influences to enter their country and turn it inside out.

You may be thinking that limiting or outright stopping the migration of refugees is a cruel and uncompassionate thing to do. But nations have the right to protect their borders. They certainly must place the safety and prosperity of their own citizens above outsiders, especially outsiders coming in such large numbers; vetting just isn't possible.

The European Union made a terrible mistake by letting in millions of refugees, without any foresight or knowledge of the outcome. Now their own people are suffering as these migrants create hostile environments. Often the leaders of these nations refuse to crack out, out of political correctness or fear of seeming intolerant.

I guess having their people raped and cities burned is better than offending the press.

Many Swedes are afraid to speak up about mass migration because they are afraid of being called racist. But even a Kurdish Iranian-born economist is not free from the politically correct mindset. Economist Tino Sanandaji wrote a book on mass migration called Mass Challenge and because it offers real facts when looking at migration a library in Stockholm is refusing to stock it because they claim it “promotes racism.” (via Breitbart)

The problem in Sweden may be unique compared to other European nations, thanks to a shocking connection between citizens and the biggest jihadist threat today, ISIS.

Swedish security services have announced the number of sympathisers of the terrorist group has gone up. This is due to the many Swedes who went to fight with Islamic State in the Middle East who return, spread their ideology, and are recruiting new members. (via Breitbart)

The real problem, of course, is the shocking level of denial from the Swedish officials and the complicit media. Once again, we are seeing a corrupt media colluding with a government they favor, covering up the facts and denying the reality. Former Prime Minister Fredrik Reinfeldt, although obviously abreast of the situation, continues to assert that migration strengthens his country. 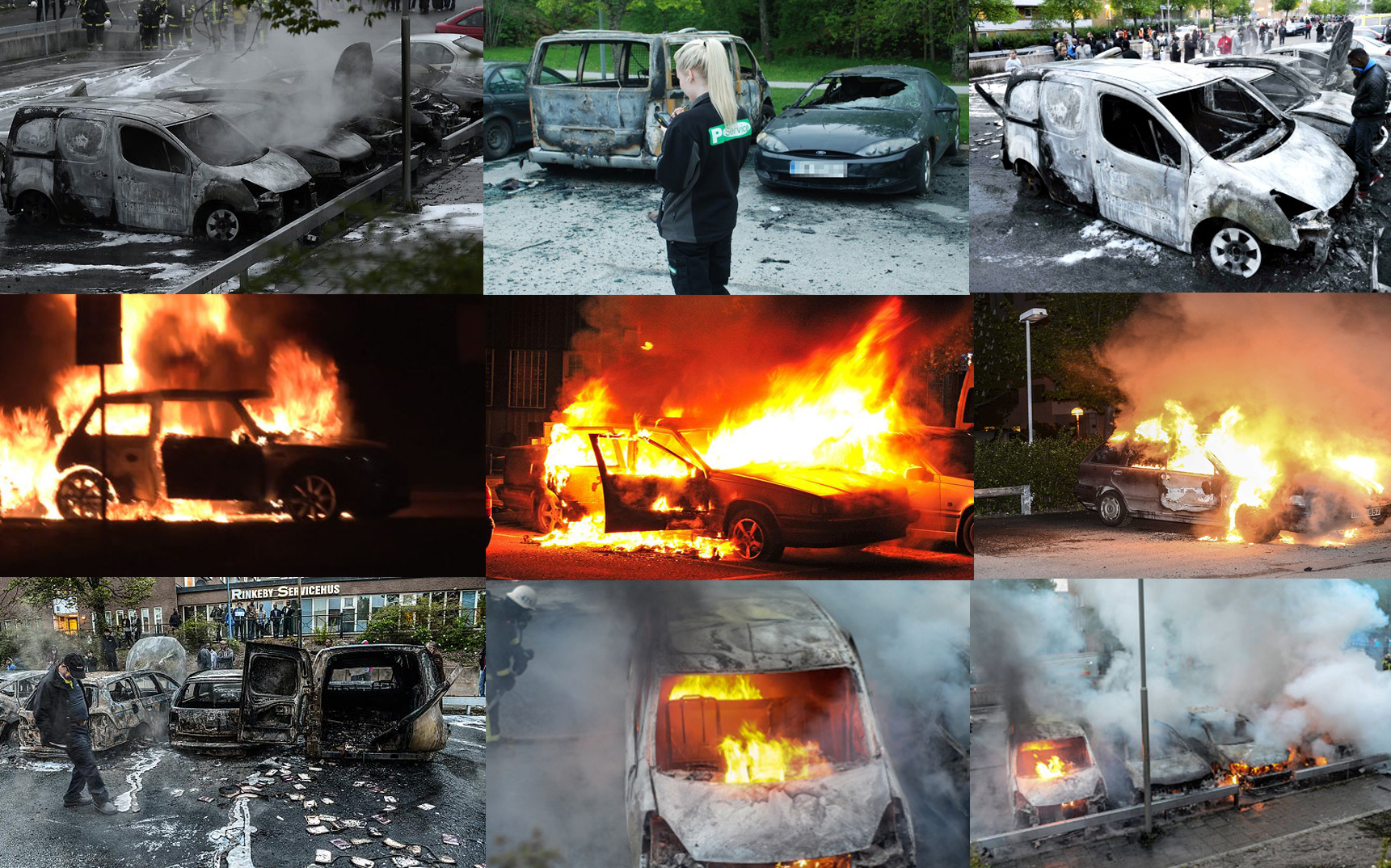 Right. Doesn't look strong to me.

As of right now, the Swedish government does not appear to want to change the ongoing problem. They even seem to be bending over backward to placate totalitarian and oppressive regimes.

But we can learn from their mistakes. Immigration is a wonderful thing. The United States and other countries benefit when fresh blood comes into their countries. But as with everything else, immigration has its good and bad sides. Legal immigration, with set limits and restrictions, can and does ensure the safety of a nation and allows good people to enter it.

The unrestrained, unvetted, and dubious migration of refugees that has afflicted Europe over the last few years is not that kind of immigration. It is a humanitarian crisis. It is a disaster perpetrated by globalists and empty-head politicians who were not thinking ahead.

Perhaps Sweden will rectify its error before it's too late. Perhaps it already is too late.