Everyone loves a good hanging.

I don’t suppose that’s appropriate to say anymore, but every scandal - or possibility of one - draws media attention, sparking countless discussions over every minute detail involved. So it only makes sense many are carefully following the corruption case centered around Choi Soon-sil, the 40-year friend of impeached South Korean President Park Geun-hye.

With her trial starting today, Choi stands accused of extortion, abuse of power, and attempted fraud. If convicted, she could receive up to 15 years in prison according to court spokesman Shin Jae-hwan. Even more troubling are the implications for President Park.

Park, 64, is the daughter of Park Chung-hee, a dictator who ruled South Korea for 18 years until he was assassinated in 1979. Park became friends with Choi in the 1970s, when Park began serving as the first lady in place of her mother who was murdered during a failed 1974 assassination attempt on her father. Choi was a daughter of late Chai-Tae-min, a purported cult leader who, rumor has it, served as Park’s mentor growing up.

Despite constantly being in the public eye, Park had a reputation among South Koreans as an aloof, cold person. There are claims of her relying on Choi’s advice for everything from policy to wardrobe choices instead of seeking counsel from her aides. Choi has been indicted for using her ties to Park and their friendship to raise money and win favors for herself and her family.

With the help of presidential secretary An Chong-bum, Choi extorted $70 million from 53 companies through the Federation of Korean Industries, a big-business lobby group. The companies felt they had to “donate” the money or they would be at risk of audits and unfair treatment from government authorities. The money was meant for two charitable foundations, Mir and K-Sports, but prosecutors claim she siphoned off a majority of it for her personal use. Circumstantial evidence shows Choi using a top Chinese official’s visit to Seoul to propose pressuring firms to donate to Mir, as well as pressuring Hyundai Motors and the KT telecommunication firm to sign $6 million and $5.7 million worth of ad contracts with Playground, an ad agency she ran. It’s also claimed that she used her ties to Park to push Hyundai to buy $930,450 worth of car components from an acquaintance’s company.

The other presidential aide, Chung Ho-sung, shared at least 180 government documents with Choi over the course of three years, including 47 that included confidential information, such as the appointments of ministers. Former Vice Culture and Sports Minister Kim Chong was indicted for pressuring companies to donate money to a foundation run by Choi’s niece, Chang Si-ho, who was also indicted. Choi has also been implicated in the charges of Cha Eun-taek, a well-known music video director, who prosecutors claim used Choi to win culture-related projects and grants from the government.

Based on cell phone records and notes containing instructions from Park about raising funds for Choi’s two foundations, it was concluded that Park “played a large role” in the efforts to raise money from the businesses, said Lee Young-ryeol, chief of the investigation at the prosecutor's’ office. Although Park has acknowledged that she asked Choi for help in editing speeches and public relations issues - she never specified what issues those were - she denies any legal wrongdoing.

The evidence speaks for itself though. On Dec 9, Park was impeached. She has been stripped of her power, and is awaiting the country’s Constitutional Court ruling on whether she must permanently step down.

“I’d like to say that I’m deeply sorry to the people because the nation has to experience this turmoil because of my negligence and lack of virtue at a time when our security and economy both face difficulties,” Park stated. 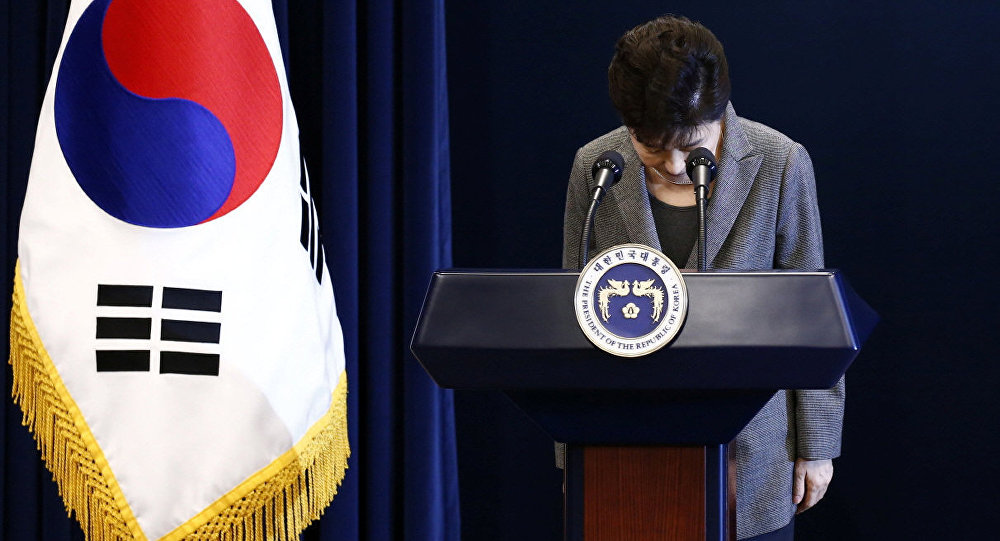 It’s a swift and stunning fall for South Korea’s first female leader, and the first instance of a political leader being so publicly disgraced in the country. The motion for impeachment, which seemed far-fetched at first, is presumably driven by the thousands who have been consistently gathering to protest over the last seven weeks. Both supporters and critics of Park have been clashing since her formal impeachment, although a heavy police force has kept the tense situations to yelling and occasional shoving. Escalation is expected though, especially as Park’s legal team addressed the Constitutional Court on Friday with formal statements saying the impeachment lacks legal grounds.

“Choi did not exert influence on state affairs, and we ask those making the accusations to come up with concrete proof...Even if there is evidence of offences, none are so serious to justify an impeachment,” the president’s representatives said.

This has enraged many of South Korea’s citizens. “I can’t stand Park for even another day,” said Kim Eun-young, participating in her third weekend protest, “Nobody wants her, but she’s stubbornly sticking around, using taxpayer money like it’s her money.”

It’s a good point to make. Park has been stripped of all power, and Prime Minister Hwang Kyo-ahn is acting as a government caretaker. Yet she continues to live her life on taxpayer money, even televising an apology to the country and attempting to garner sympathy by sharing details of her lonely life and now empty days. It is gaining some traction along the internet, but most can see right through her. Perhaps she may feel some remorse, but it seems much more likely that Park is trying to take care of her own interests yet again. With an approval rating of just 5%, Park’s refusal to step down seems a rather desperate attempt to escape formal charges. She would lose presidential immunity if she left office early, and would be prosecuted for abuse of power and bribery, among other charges.

Park’s fate lies with the Constitution Court now, who will determine whether parliament followed due process, and if there were sufficient grounds for impeachment. It has up to six months to decide on Park’s case, which means Choi’s trial and verdict could carry a heavy weight in their decision. If Park is formally removed from office, South Korea will need to hold a presidential election within 60 days.

Given President-elect Trump’s numerous conflict of interests, the formal impeachment of President Park is quite an interesting case study. Watching the verdict of Choi’s trial and Park’s final outcomes in the South Korean Constitutional Court will be about more than just morbid curiosity. Seeing someone hang for their crimes may be an outdated concept, but knowing that political leaders are now experiencing real consequences for their actions is something I’d watch any day.

No one should be above the law, not even presidents.