Since Russia held its Zapad-2017 (West-2017) military drill in Belarus, western Russia, and a land-locked Russian territory bordering the Baltic Sea in early September, there has been some level of speculation as to what circumstances would warrant such extensive military preparation. The westerly location and scope of the drills led many to a seemingly unavoidable conclusion: the troops were being put through a dry-run of a conflict with the member nations of NATO.

Ukraine, a nation who has been first-hand witness to – and often first victim of – Russian aggression far more often than they would like, confirmed their own belief in this conclusion, fortifying their border defenses as their president Petro Poroshenko referred to the drills as "preparations for an offensive war on a continental scale". If any nation understands the telltale signs of Russia gearing up for conflict, it’s Ukraine. But you don’t need to be an expert to understand that the military exercises conducted in September were far from run-of-the-mill.

The drills were massive in scale, as approximately 12,500 soldiers were deployed, 7,200 of them Belarusian and 5,500 Russian in concert with 680 military vehicles, 250 tanks, and 70 aircrafts, both planes and helicopters. These exercises, it appeared, were conducted at a continental war-like scale, just as Ukrainian president Poroshenko stated at the time. It has been suggested that a more realistic total of Russian and Belarusian troops being prepared for similar drills hovers around 80,000. 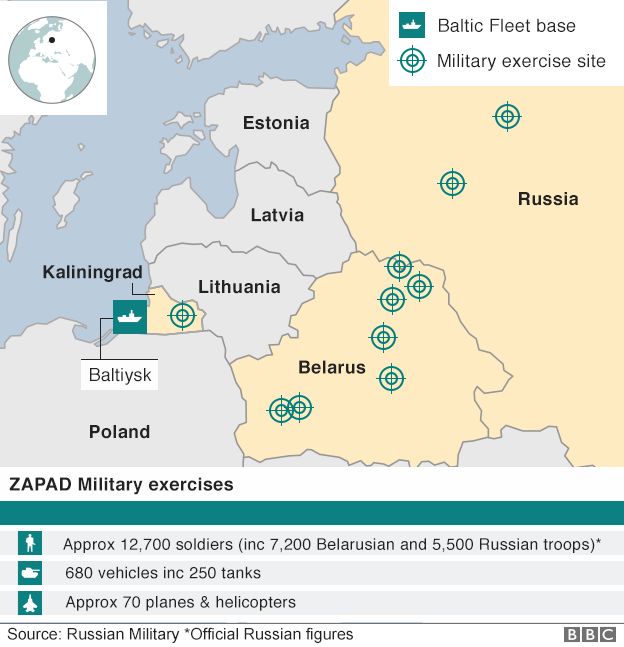 Around the time of the drills, the BBC reported that ‘NATO watchers weren’t as concerned that these drills could be a sign of an all-out invasion of Ukraine.’ Russia expert Keir Giles of the Chatham House think tank said that "there have been plenty of other major Russian exercises…which did not end up with somebody getting invaded". They cited Belarus’ staging of drills in the middle of the nation, as opposed to a position nearer to its western border with Poland and Lithuania, as an indication that the nation wanted to avoid the impression of a threat.

But despite experts’ words, NATO troops had been steadily deployed to Poland and the Baltic states over the course of the prior year, moves that signaled a sense of increasing Russian military ambitions, perceived or real. Perhaps the drills were meant to send a responsive message to the increase in NATO troops in the region.

"For all the modernization and transformation of the Russian armed forces," U.S. analyst Michael Kofman writes, "in reality the Russian leadership is probably still afraid: afraid the United States will try to make a bid for Belarus, afraid of American technological and economic superiority, afraid the US seeks regime change in Moscow, and afraid Washington desires the complete fragmentation of Russian influence in its near abroad, or even worse, Russia itself."

"Zapad," he argues, "is the most coherent manifestation of these fears, and a threat from Moscow to the United States about what it might do if the worst should come to pass." (War on the Rocks)

Now, this rendition of the Russian drills by Kofman has been confirmed through an interview with Estonian Defense Forces Commander Riho Terras. According to Terras, Russia “simulated a large-scale military attack against NATO”. Whether Vladimir Putin’s show of military might is to be considered an offensive or defensive one is a matter of perspective, but the Independent reports that the ‘exercises were used to simulate a conflict with the US-led alliance and show off Russia’s ability to amass large numbers of troops at extremely short notice in the event of a conflict.’

This means that the drills were meant to send a message that ranges far beyond Ukraine, yet this revelation does not necessarily indicate whether Russia intends to conduct a larger-scale invasion of their western neighbor. Ukraine initiated the process of joining NATO in 2008, but those plans were scrapped in 2010 at the behest of the Yanukovych government. However, since Russia’s military intervention in Ukraine in 2014, Ukrainians have once again shown increased interest in becoming a member nation. It’s almost certain that any Russian strike on NATO would include an invasion of Ukraine, but the invasion of Ukraine alone wouldn’t necessarily garner a response from NATO’s members, though it’s likely they would levy a military response.

“Let me be clear: with the exercise Zapad 2017, Russia simulated a large-scale military attack against NATO.” Terras said. “It was not targeted towards the Baltic states only, as it was a theatre-wide series of exercises spanning from high North to the Black Sea. The scale and extent of the entire exercise was far greater than officially stated.”

Included in Russia’s drills were the practices of ‘neutralizing or taking under control air fields and harbors in the Baltic states, as well as simulating bombings of critical infrastructure such as air fields, harbors, and energy supplies in western Europe,’ according to the Independent.

While this confirmation of war-scale drills conducted by Russia from the mouth of such a high-ranking Estonian military official is alarming, Vladimir Putin may well see the drills as defensive. Putin could view the drill as Russia’s especially paranoid brand of war avoidance, though it will do little to quell the renewed Russian scare that has emerged since the 2016 American election. Between the vilification of Russia as constantly puppeteering Western elections, its competing interests in attaining greater influence in the Middle East, and the deployment of NATO troops to Poland and the Baltic states, Vladimir Putin likely sees ample reason to prepare for the worst.

This doesn’t necessarily mean that he is going to launch any preemptive strike against the Baltic states or invade Ukraine. Hopefully the drills – as seemingly over-the-top as they were – were meant only to send a message that Russia is not the backwards, militarily inferior nation it was long perceived as.

That said, there’s no way around this: In a time when the entire globe seems to be teetering on the brink of conflict, such a heightening of rhetoric to the extent of war-scale military drills is nothing if not a bad omen.