School Board Meeting On Muslim Prayers Gets Ugly

Police were forced to intervene in a school board meeting last Wednesday when audience members shouted anti-Muslim rhetoric and tore pages from a Quran in protest of prayer spaces at schools. The anger forced the province’s Liberal government to issue a statement supporting religious accommodation to students.

Peel District School Board (PDSB), which is a public school system that encompasses the Toronto suburbs of Mississauga, Brampton, and Caledon, had started providing spaces for Muslim students to meet and pray as a group every Friday. Boards are legally required to provide religious accommodation when it's requested, but critics argue a secular school system should not accommodate religion. Some schools in the Greater Toronto Area, for example, have even gone so far as to allow students to be exempted from classes- such as music and art- based on religious beliefs. However, PDSB argues that this is only a last resort after failing to reach a compromise with parents.

“We know that the Peel District School Board has been working close with their students and the community for more than a decade on religious accommodation in their schools,” Education Minister Mitzie Hunter and Michael Coteau, Minister of Children and Youth Services, said in a statement Thursday. “We are pleased to see their commitment to inclusion. Realizing the promise of Ontario’s diverse is a continuous process grounded in actively respecting and valuing the full range of our differences.”

Brian Woodland, spokesman at Peel, told the Globe and Mail about 80 people attended the board meeting in the late evening on Wednesday. As school trustees were offering tributes to a retiring staff member, the meeting’s agenda was interrupted by the angry parents which escalated quickly. With many already riled up because the start of the event was delayed, one parent sitting in the front row began making retching noises followed by others screaming that they were being disrespected as taxpayers. Woodland recounted that one person in the audience stood up, tore up a copy of the Quran, and another person stomped on and walked on the pages. He said members of the crowd immediately began shouting “fairly horrific” anti-Muslim comments.

“We don’t want religion in schools,” screamed one unidentified woman. “Leave our kids alone.” A man in front of her took it a step further.

“People died today because of that book,” he shouted, referring to the Quran and speaking of the London terrorist attack. “You guys killed four people today.”

Other school board meetings have been disrupted lately, although this past meeting featured Ron Banerjee, head of the hardline anti-Muslim group Canadian Hindu Advocacy at the forefront. Peel Region police were on hand this past week, and about half-an-hour into the meeting were asked by the board's chair to clear the crowd out of the room. Woodland claimed that those protesting in the room were not opposed to religious accommodation, but were actually opposed to accommodating Muslims in schools.

“They used language and comments that were the most hateful that I have ever seen in my career,” Woodland said. “I was actually deeply shaken by what I hear. I’m not sure I’ve ever in my life seen this level of hatred.”

Hearing about incidents like this make the passing of M-103 in the House of Commons a little easier to understand. I still disagree with its incredibly vague language because I think the bill will be misused, but anti-Muslim rhetoric is becoming more and more commonplace.PDSB has been rife with protests since the fall, when the board brought a new procedure in that required Muslim students to choose from six pre-written sermons at the Jummah prayers, the communal worship in which Muslims participate every Friday. Jummah prayers have been accepted in Peel schools for two decades without issue, but the new policy meant that students leading Friday prayers for their Muslim peers could use only the sermons approved by the school board, instead of writing their own and using one approved by a school administrator on a case-by-case basis. There was some pushback from students and the Muslim community that the decision to limit their sermons violated their right to religious freedom, the school board revisited the policy this year and revised its procedure to allow students to either deliver their own sermons or choose from pre-written ones approved by local imams. However, with these new accommodations, a larger movement has started. PDSB has tried to combat the misinformation circulation by releasing their own fact sheet, but according to a Twitter user, other flyers were being passed around before and during the latest school board meeting. 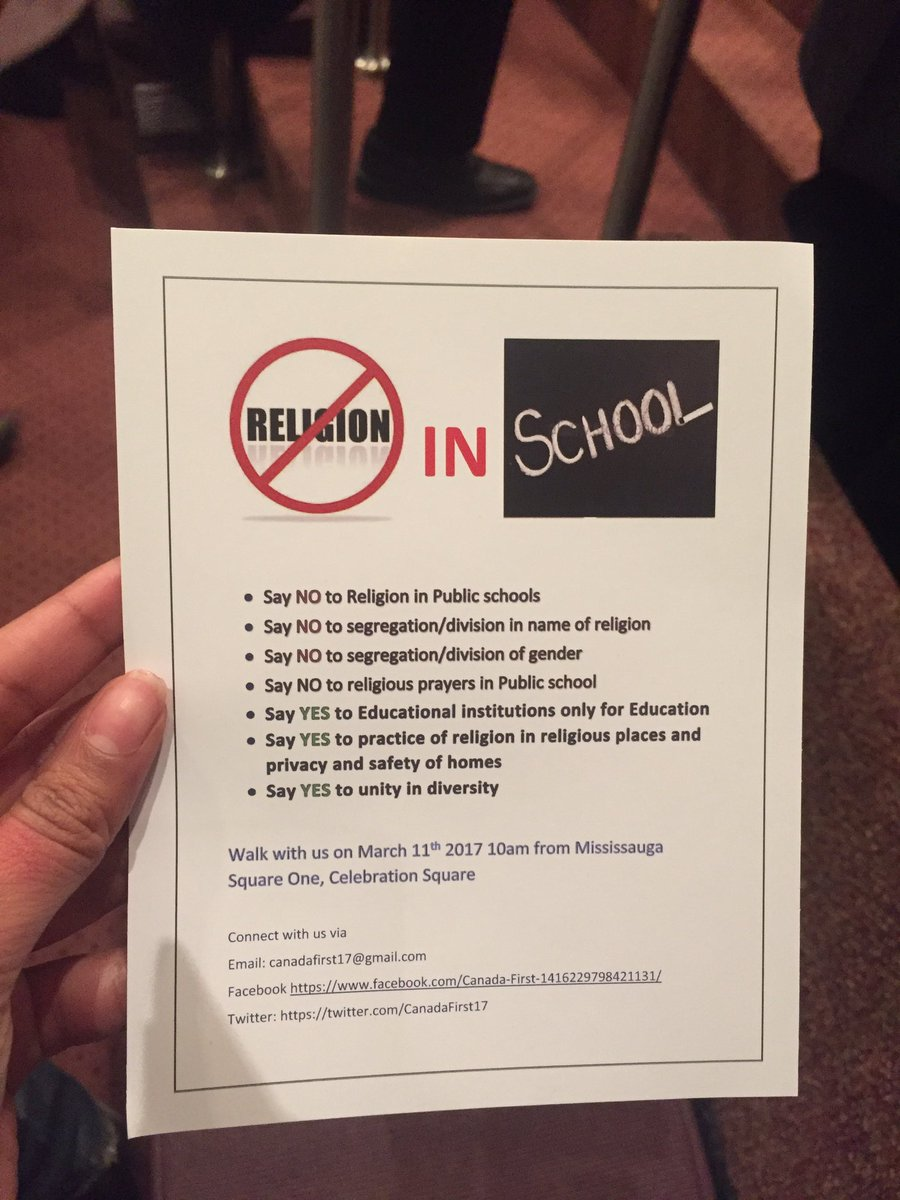 Truthfully, that poster sums up my thoughts. I agree; religion has no place in public schools. I supported the removal of the Lord’s Prayer, and with that thought agree that praying in school no matter the religion is silly. We should be preparing kids for the world of academia. If someone is personally religious, it shouldn’t affect their education, and no one should have to change their time schedules. Of course, that’s not what the protest is really about here. As Peel Board Chair, Janet McDougald pointed out, these prayers have been happening for so long without controversy; it’s “been a pretty well-oiled practice for many, many years,” she said, explaining that the time is overseen by volunteer staff, and that students must sign in and out of empty classroom spaces. Anti-Muslim hate appears to the be real driving force behind these protests.

I disagree with their methods, but I think the anti-religious movement in schools is something worth pursuing. Where do we draw the line of religious accommodation in public spaces? PDSB is a publicly funded school board. Why is it the responsibility of the school to accommodate anyone? The Islamophobic motivation for those protesters at the meeting is wrong, but I think the argument for the removal of all religion in schools is valid. If religion is that important to a family, there are plenty of other schooling options for them to enroll their children in- Catholic schools are still quite common (although their funding should not ever come from public funds; but that’s a different discussion). It seems like something should be changed in the legality of religious accommodations in schools to stop these issues altogether.