NK’s Celebrity Scientists Are Key To Its Nuclear Rise

If you’ve wondered how a poor Pacific nation slightly smaller than Mississippi has become the subject of America’s next potential major military conflict, consider where North Korea puts the lion’s share of its resources. It spends an estimated 22 percent of its GDP on the military, which also explains in part why the country routinely endures blackouts and mass starvation. Were it not for Kim Jong-Un’s emphasis on science, however, the country’s nuclear program would not be nearly as ambitious or rapidly developing as the world has witnessed in recent months. In a nation where the Supreme Leader’s own uncle or wife is not safe from spontaneous annihilation, the freedom granted to nuclear scientists and engineers to fail in their efforts is unparalleled. That they may live like relative kings in the process of developing nuclear weaponry seems bizarre by most nations’ standards. But such status is reflective of the value that Kim has put on North Korea’s standing as a nuclearized military power, and it has garnered him international attention not afforded since the Korean War.

The Rocket Men, as they have been dubbed by the New York Times – with a hat tip to the president – do not live the life of the average North Korean citizen. As each nuclear test has improved upon the last, their advantage in the backwards society has grown greater. These men have been pictured next to the president, who appears to be questioning them as he tours nuclear facilities. They often don the dress of high-ranking party members, doing their research in relatively casual, dark-blue government-issued frocks that are similar to the Supreme Leader’s. Rarely identified by name, the men whose appearance is now associated with North Korea’s race for intercontinental nuclear missiles that can reach the United States have instead come to be known by monikers fit for a Motown super group, such as the “nuclear duo” and “missile quartet”. 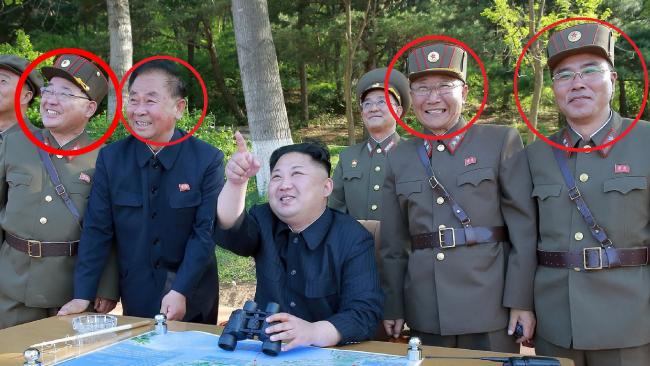 Under Kim’s regime, the proliferation of North Korea’s nuclear arsenal has become inextricably linked with the nation’s self-image, its perception of domestic success. We may never fully understand the line between feigned adherence to and belief in the Kim agenda by, say, a family who is routinely subjected to starvation due to the state’s misallocation of resources. That said, it’s easy enough to understand that any person aspires to climb the societal rung, bettering their family’s circumstances as a result. In North Korea, it’s clear that achieving in the field of science, and especially as a nuclear  physicist or engineer, is one of the few roads to the top of that societal hierarchy.

"We have never heard of him killing scientists," said Choi Hyun-kyoo, a senior researcher in South Korea who runs NK Tech, a database of North Korean scientific publications. "He is someone who understands that trial and error are part of doing science." (NYT)

While first-hand accounts originating from North Korea must always be taken with at least a grain of salt, there is good reason to believe that these scientists heading the nation’s nuclear operations have in fact been granted leeway not common in North Korean society. Perhaps the greatest evidence of this is the documented improvement that each successive missile launch has exhibited, an indication that these men are being granted the freedom to learn from their errors with further trials. In a nation ruled by a notoriously impatient and paranoid 33-year-old leader, being granted freedom to fail is substantial in its significance. Were these men not working toward a weapon that has increased Kim’s international cache more than anything he has known, he would not be quite as patient.

As opposed to his father’s decision to center society and propaganda around an affinity for the arts and culture, Kim has re-oriented North Koreans around reverence for nuclear science and the men who facilitate its evolution. For those who are not established or budding North Korean physicists, engineers, metallurgists, or chemists, this is a frightening reality.

‘Four years after taking power in 2011, Kim Jong Un opened a six-lane avenue in Pyongyang known as Future Scientists Street, with gleaming apartment towers for scientists, engineers and their families.

He also opened a sprawling complex shaped like an atom that showcases the nation's achievements in nuclear science. Extravagant galas are held to celebrate scientific progress.

There is little doubt what is behind Kim's passion for science. In ubiquitous propaganda posters, North Korean rockets soar into space and crash into the U.S. Capitol.

And after successful tests, scientists and engineers are honored with huge outdoor rallies. On their way to Pyongyang, their motorcades pass cheering crowds.’ (NYT)

Scientists are some of the only North Koreans permitted to use the internet, though their use is restricted to data and information that allows them to advance the nuclear cause. Top science students who are chosen as the next generation of nuclear specialists are moved from their homes to centers where they further their studies under the watchful eye of the government. In most cases, the separation from their families is offset by better living conditions and larger, more consistent food rations.

The model of assigning special rank and privilege to those talented in the sciences is closer to the traditions of Kim Il-Sung, Kim Jong-Un’s grandfather. After the Korean War, those who received scientific training abroad were tasked with helping to rebuild the nation’s heavily-damaged military infrastructure, receiving treatment from the government that rivaled non-scientific peers. Today, six North Koreans remain noticeably atop the current scientific hierarchy.

‘Two members of the "missile quartet" are scientists, according to state media. Jang Chang Ha, 53, is president of the Academy of National Defense Science, and Jon Il Ho, 61, is commonly described as an "official in the field of scientific research."

Kim Jong Sik, 49, first began appearing with Kim Jong Un in February 2016 and has an engineering background. His rise has coincided with an acceleration of test launches, but he and Ri did not attend last month's launch.

Ri Hong Sop, the director of North Korea's Nuclear Weapons Institute, appears to be a leading figure in the nuclear program. He has been blacklisted by the United Nations since 2009.

Hong Sung Mu, the other member of the "nuclear duo," is a former chief engineer at the Yongbyon nuclear complex, the birthplace of the North's nuclear weapons program.’ (NYT)

The nation is also known to, in a more behind-the-scenes manner, recruit Russian engineers who assist the North Korean scientists in replicating designs reflective of the old Soviet and modern Russian models. This is perhaps the greatest advantage that North Korea has employed in modernizing its arsenal, dating back to the days of Kim Il-Sung. However, the presence of North Koreans atop the nuclear hierarchy is no accident. After all, the propaganda is centered around North Korean might and nuclear capability, and that is precisely the image Kim has projected, ascribing these men status almost reminiscent of a peer. OK, not that close, but far higher than the typical North Korean.

One photo from a July event was rife with symbolism meant to further elevate the status of North Korean scientific brass.

‘In photos from the event, missile experts could be seen sharing cigarettes with Kim after last month's missile launch — an almost unimaginable privilege in a nation where he is portrayed as a godlike figure.

Perhaps the most surprising photo came in March, when Kim carried an unidentified official on his back while celebrating the ground test of a new rocket engine.

The image evoked an old Korean tradition in which young men give their aging parents piggyback rides as a symbolic gesture of gratitude for the hardship they have endured for their children. But others say the image took on a different meeting and Kim was actually playing the parent, carrying the scientist on his back as a father might a child.’ (NYT)

While there is no confusion that Kim remains the end-all-be-all in North Korean society, the nuclear program is the shared pride of the nation, should Kim be left to tell the story. This has meant exalting the role of the most capable North Korean scientists as almost secondary to Kim, above traditional military leadership and high-ranking government officials. Through this revised societal structure, Kim appears to be breeding the next generation of North Korean nuclear scientists, hoping to further the tiny nation’s role on the international stage beyond its already-outsize specter. That is, if he doesn’t get himself – and countless North Koreans – killed before the future has time to arrive.