NAFTA Talks Off To A Contentious Start

Anybody who paid attention to Donald Trump’s words on the campaign trail and in the wake of his election knew that renegotiation of the North American Free Trade Agreement was a top priority. Such renegotiation falls in line with Trump’s promises to prioritize the American blue-collar worker as a means to boost the American economy. Further, Trump promised that renegotiation of such “bad deals” would reestablish an elevated quality of life and job availability for manufacturing workers that had been eroded in recent years.

The time for negotiation talks are now, and as predicted, Trump and his representatives are experiencing some significant pushback from Canadian and Mexican leadership, who are not keen on the idea of kowtowing to Trump’s wishes.

The leaders of both of America’s neighbors have levied public criticism of Trump, who they seem to see as averse to the idea of a unified North America. In January Nieto, under great pressure from the Mexican masses, canceled a meeting with Trump. Anti-Trump sentiment will not prevent the successful renegotiation of NAFTA, however, and it is unlikely that Mexico would sacrifice the American marketplace which it relies upon immensely as an exporter.

Meanwhile, the obstacle Trudeau and his government’s representatives pose to an America-first approach in NAFTA negotiations has remained more overt. As a country with greater potential to survive economically should negotiations fall through, Trudeau’s words must be given more credence than Nieto’s. And, many of his words pertaining to NAFTA fall in stark contrast to Trump’s.

"Sometimes getting it right means refusing to take the politically tempting shortcuts. More trade barriers, more local content provisions, more preferential access for homegrown players and government procurement, for example, does not help working families over the long term or even the midterm," Trudeau said while at the National Governors’ in Rhode Island in July.  “Canada doesn't want to go there. If anything, we'd like a thinner border for trade, not a thicker one," Trudeau added. (The Independent)

Trump has played his part in creating a negotiation environment conducive to hostility, with his consistent assertion that Mexico would, in fact, pay for the border wall and public comments critical of Canada’s high tariffs on dairy imports as well as the nation’s approach to energy, lumber, and timber trade. The latest reports on how negotiations are unfolding confirm previous speculation that renegotiation of NAFTA would be somewhat contentious from the start.

By all accounts, Trump and the United States hold most of the leverage in negotiations:

‘While proponents of NAFTA often argue — with evidence — that the United States has much to lose from ending the special trade relationship with Mexico and Canada, those countries would suffer too. Canada relies on the purchasing power of U.S. consumers for a whopping 75 percent of its total exports. American buyers fuel more than 80 percent of Mexico’s total exports.’ (McClatchy DC)

Those numbers mean that America has a significant upper-hand in these now-ongoing negotiations, and it also helps inform why Trump feels so confident that Mexico, should he decide to push the issue, will ultimately pay for the border wall. The leverage America holds through its consumer markets is immense. And, Trudeau and Pena Nieto seem to be aware of NAFTA’s significance to their domestic economies: 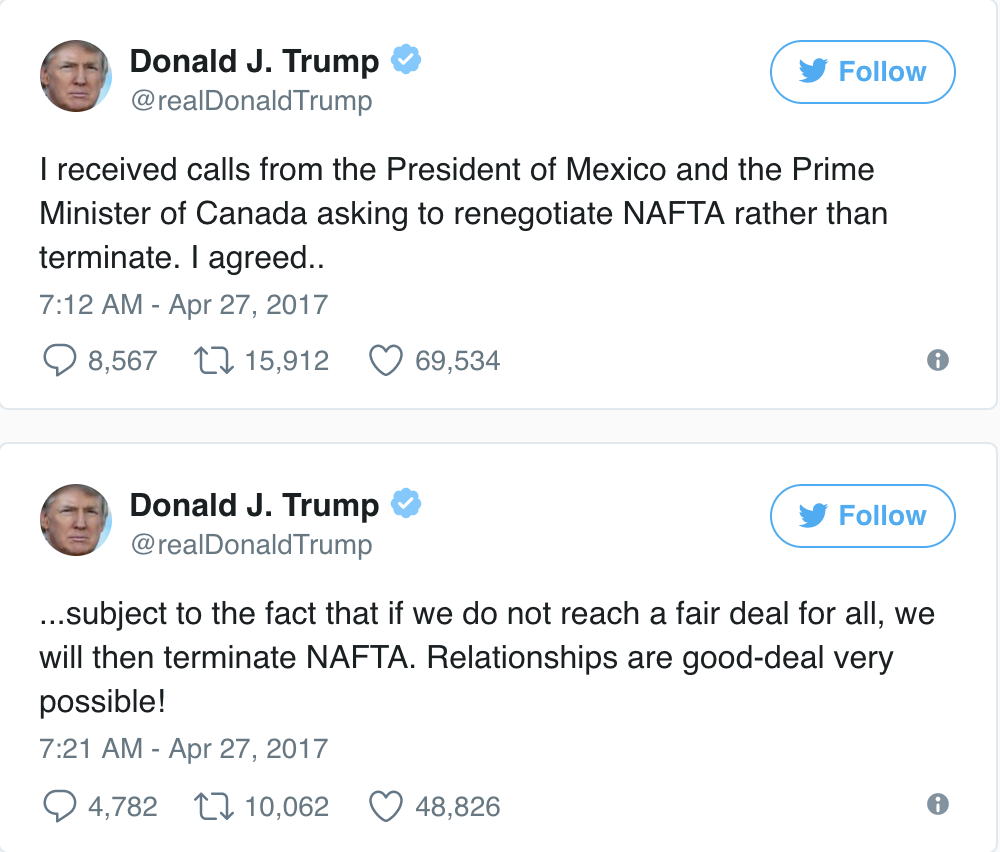 But how much would the economies of Mexico, Canada, and the United States be affected by the elimination of NAFTA?

As documented by Quartz, NAFTA virtually eliminated all tariffs on goods traded between the participating countries. While there are some notable exceptions– Canada’s dairy tariffs and Trump’s recently-imposed tariffs expressly aimed at Canadian lumber imports are two– the agreement has worked to significantly stimulate trade, particularly in the agricultural sector, throughout the continent. While there is fear that American farmers may lose out should NAFTA be significantly tweaked in favor of the manufacturing sector, it is widely agreed upon that there is room for improvements through renegotiation. And, the alternative would be far less than ideal for all three countries, which is why a renegotiated NAFTA, versus an eradicated one, is the likely result of these talks. To illustrate each nation’s motivations for keeping some deal in place, one must only consider what would likely happen if NAFTA were to be vacated.

In lieu of a trade deal pertaining solely to North America, one would assume that the likely alternative would be the parameters which govern the World Trade Organization. Quartz illustrates what this system would look like:

‘Without it, tariffs would revert to levels under the World Trade Organization. That’s an average 7.5% tariff on American goods coming into Mexico, and as much as 150% for certain products such as meat and poultry. Mexican products, in turn, would have to pay an average 3.5% to enter the US. (Since Canada and the US had a free-trade agreement that predates NAFTA, exchanges between the two countries would likely remain tariff-free.) That could put a dent on North American trade. So far this year, the US has sold Mexico and Canada $80 billion worth of goods, or a third of all its exports.’

While the United States has the least to lose, it still stands to lose, significantly, from the complete elimination of NAFTA. This is even truer with respect to Canada and Mexico. With the premise that renegotiation is far more likely than abolition in mind, let’s look at the current state of affairs.

Going into negotiations, Donald Trump’s primary goal was and is to eliminate the loss of jobs that arose after NAFTA was signed, a link that most agree was due to the elimination of tariffs on many sectors, and the attractiveness of a cheaper Mexican Labor force to manufacturers. In addition, he wants to reduce trade deficits which are far more polarized with Mexico than with Canada. This goal means an approach which aims to standardize laws and practices in each country pertaining to small and medium-sized businesses, services, digital trade, the environment, and other factors which affect the continental business climate. According to the Wall Street Journal, the negotiators reached ‘broad agreement’ in these listed categories once the second round of negotiations ended on Tuesday.

Still, there are further hurdles to be cleared, and Canada’s reported insistence that America repeal anti-union right to work laws will certainly be a contentious point of negotiation, as it stands against Trump’s professed plans for limiting barriers to work for all American workers, not just those belonging to unions. Both Canada and Mexico are aware that Trump will most likely see increased tariffs on Mexican and Canadian imports as the solution to reducing the deficit, and their primary motivation is to avoid this increase in the cost of exports.

Mexico, for its part, has resorted to playing the ‘China Card,’ the agenda dubbed by the Atlantic as Mexico’s ‘Plan B’ should NAFTA negotiations not result in a revised agreement. A free-trade deal between China and Mexico– seen largely as a hollow means to negotiation leverage by Mexico– would be far more costly than a continued agreement with its next door neighbor. It is unlikely that Trump is taking such an agreement seriously as an alternative to NAFTA.

Canada and Mexico’s immense dependence on the American marketplace for the export and consumption of its goods means that they must find some way to attain leverage. While it is in all three nations’ interests to find a way to a deal, America’s two neighbors have far more to lose should an agreement not be reached.

For this reason, it is highly likely that these negotiations result in a renewal of NAFTA. How much ground Trump chooses to cede to the leaders who have publicly criticized him in various ways remains to be seen, but it is safe to bet he does not cede very much ground at all.

Even his critics admit that negotiation is one of the President’s greatest strengths, and this is the first opportunity for him to flex his muscles. As a man of considerable ego, it would not be surprising if he instructs his negotiator, US Trade Representative Robert Lighthizer, to take all that he can get on behalf of America.