From Kimonos to Hoop Earrings: Who Owns Culture?

We have heard a lot about cultural appropriation in the last few years. Although some argue that this is linked to the stifling political correctness permeating society, it can also be linked to deepening education and research into the topic. Of course, no one would have given a second thought four decades ago if they wanted to wear something cultural, but that comes with its own undertones and implications of the racial tolerance of the public then.

Cultural appropriation is not a simple topic. Its general definition is the practice of adopting or using elements of one culture by members of another culture. It’s taken on a harmful and racial implication lately as its popular definition involves a dominant culture using other cultural identifiers and art without the consent of the original culture’s members. And yes, that may be the most confusing sentence in the world.

There are so many elements of culture that it’s impossible to create an easy checklist for what constitutes appropriation. However, lately, it seems like the answer is whether it offends someone or not. As we can all agree, offensiveness is not an accurate measurement for anything. As Ricky Gervais once said, “Just because you’re offended, doesn’t mean you’re right.”

This isn’t to say there aren’t any grievances. There are countless circumstances where cultural appropriation is horrendous, tasteless, and downright racist. There are instances of blackface still occurring even though the racist history has long been documented and discussed. But then there are instances where things are taken too far, like when a resident assistant at a college sent out a school-wide email discussing how upsetting it was to see white girls in hoop earrings. Yes, hoop earrings.

Recently, the Museum of Fine Arts (MFA) found themselves unwitting players in the cultural appropriation debate. It began last month when the museum invited visitors to “channel your inner Camille Monet” by trying on kimonos and posing for photos next to Claude Monet’s painting “La Japonaise.” The event coincided with a lecture titled, “Claude Monet: Flirting With the Exotic,” sparking the outrage of several members of the public. The MFA responded by changing the talk’s title to “Claude Monet: ‘La Japonaise,” displaying the kimonos for visitors (no longer allowing them to try on the articles of clothing), and adding more educational talks to provide background and context on French Impressionism and the “Japonisme” movement, where the French became fascinated with Japan.

Tensions culminated in protests at the MFA, where crowds gathered to simultaneously protest against the idea of fetishizing Asian culture and encourage exploration of the Japanese culture. As the Boston Globe reports, one woman named Pampi held a sign that read, “Decolonize our museums,” and charged the MFA with “shirking its responsibilities to curate the event for a diverse American audience.” On the other hand, counter-protesters arrived, with several older Japanese women donning kimonos and holding signs that read, “I am not offended by people wearing kimonos in front of French paintings,” and “I welcome museum exhibits that share Japanese culture with the community.”

Aside from the fact that some of the protesters need a lesson in sign making, the whole controversy is pretty funny. The painting itself is rooted in the idea of cultural borrowing, and understanding the issues require acknowledging the painting complex context, such as the French infatuation with Japan and the corresponding Japanese infatuation with French Impressionism. Yet the protests continued anyway. The original idea was announced without a lot of thought or care about the historical significance, but the MFA quickly rectified the situation and moved to provide history. “We actually do not quite understand what their point of protest is,” said Jiro Usui, Deputy Consul General of Japan in Boston. “We tried to listen to those people who are protesting [against], but we think together with the MFA we should encourage the Japanese culture be appreciated in a positive way.”

It almost feels like a protest for the sake of a protest. Of all places to accuse of racism, the Museum of Fine Art? They realized their “mistake,” and actively worked to change the program as to provide proper education and in-depth history on Japanese culture and French Impressionism. I don’t think you can really ask for more than that. They can’t go back in time and stop the program from launching, and truthfully I don’t think they should. Something that may have started as disrespectful has been changed into an educational experience to stop future events like this from happening. Not only have the staff at MAF been taught historical significance and representation, but now the public attending will be as well.

It’s very similar to the banning of First Nations headdresses at many music festivals. A military symbol of respect and culture of Aboriginals, when non-Natives began wearing them to random events, members of tribes spoke up. Various music festival organizers stepped in and corrected the atmosphere which created the offensive appropriation, by banning them. It’s against the law to claim to be a veteran with war medals, and once explained in that sense, it becomes clear why many Natives were in an uproar about the trend. It’s in a similar strain as American Apparel’s attempt to start a trend by selling a ‘conical Asian hat’ on their website. 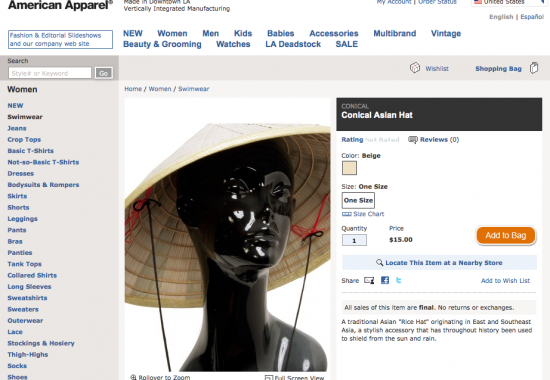 I suppose American Apparel was hoping to shift us into some sort of agrarian society, but their replicas of the hats were for pure profit. They provided no context or attempt at education. It was the epitome of stealing from culture; all historical and social connotations were stripped from the fashion accessory, and repackaged to be consumable for American audiences. Not only was it being sold for a ridiculous amount of money, but no mention was made of the poor laborers who wore these hats to protect their faces from the sun. The dangers of melanoma are well known, but unfortunately, there is some discussion to be had on social issues: pale skin was revered as more beautiful than any other skin tone. The perception is still relevant, with many beauty companies selling skin-lightening creams to Asian and African markets. These examples of cultural appropriation are very different from the accusations leveled against Canadian politician Niki Ashton recently. A hopeful for the New Democratic Party leadership, Ashton posted a reference to one of Beyonce’s old chart toppers in a social media post. 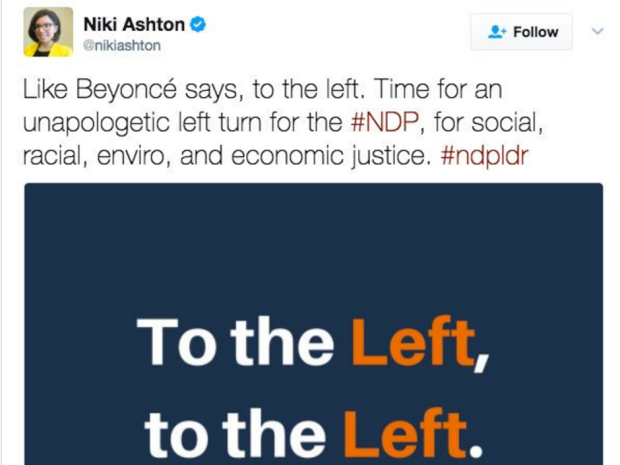 I don’t understand how a pop song for mass consumption is a representation of black culture. If someone can explain it to me, then please do. But considering the song is not only a co-write between Beyonce and Ne-Yo, but a song about unfaithful partners in a relationship, I’m not sure how Ashton perpetuated cultural appropriation by quoting the song. The song itself is not a symbol or aspect exclusive to black culture. I suppose arguments could be made as to the style of music, but considering that Beyonce is a well-known pop artist who released the song to the public, I don’t see how that argument is justified. This is an example of things being taken too far. I proudly wear the badge of a social justice warrior, but even I think this is an example of extreme political correctness. It’s pretty frustrating, when there are legitimate issues of cultural appropriation happening.

I personally think the key to cultural appropriation is intent. If something is stripped of all other aspects of the culture and stereotyped in a derogatory, mocking, or frivolous way, then by all means, line the streets in protest. But we also have to understand that mistakes will be made. Not everyone can be spending hours researching every piece of clothing or activity they choose to partake in to ensure that they’re not offending anyone. That’d be ridiculous. We can’t exist in a vacuum. Culture, music, art, food, society in general would become stagnant without the exchanges of ideas. These grow and morph, and to try and isolate influences to the cultures or styles you have “rights” to is the silliest concept. That stifles creativity and development. If someone acknowledges their mistake of cultural appropriation -like the MFA- and looks towards education to respectfully display these elements, I’d chalk that up as a win for diversity, and culture.