Justin Trudeau Cries For Gays While He Arms Their Killers

Canadian Prime Minister Justin Trudeau never seems to shy away from grabbing the virtuous spotlight. Addressing the House of Commons in Ottawa, Ontario last Tuesday, the leader of the liberal party condemned his country’s prior treatment of the LGBTQ community, offering a tearful, heartfelt public apology for actions he described as ‘state-sponsored, systemic oppression.’

“This is the devastating story of people who were branded criminals by the government — people who lost their livelihoods, and in some cases, their lives,” Trudeau spoke softly. “These aren’t distant practices of governments long forgotten. This happened systematically, in Canada, with a timeline more recent than any of us would like to admit.”

And Trudeau is absolutely right. This enlightened tolerance and liberty given to the LGBTQ community in Canada, let alone globally, is only a recent fight that still rages on. Across the world, 76 countries still outlaw homosexuality. Of those 76, there are 10 countries where the punishment it the death penalty. And from the 50s to the late 90s, The Guardian reports that previous Canadian administrations “monitored and interrogated” members of their own government and military they believed to be lesbian, gay or bisexual, tossing these civil servants out with the iron fist of the law for a different lifestyle.

“Nothing short of a witch hunt,” Trudeau described this history. “Those arrested and charged were purposefully and vindictively shamed. Their names appeared in newspapers in order to humiliate them, and their families. Lives were destroyed. And tragically, lives were lost.” Proceeding to shed the political tear.

Now, as a political move, this is rhetoric that works well for his base and the general public. Trudeau’s poll numbers rose to 45.6% this week from his previous week’s ranking at 44.1%, bringing more queer and “ally” voters into his fold… but it’s rhetoric that’s rings very ironic.

The prime minister, like all seemingly pro-gay politicians from The Clintons to Trump, have one dreaded skeleton-in-the-closet in common on the international stage: Saudi Arabia.

In 2016, Canada’s Liberal government, which rose to power the previous year, failed to cancel a $12B arms sale made between the Conservatives under Stephen Harper and the middle eastern superpower.

The same Saudi regime which just so happens to torture and behead gays, lesbians, bisexuals, transgenders, and anyone else that’s considered sexually haram through witch hunts and state-sponsored, systemic oppression. 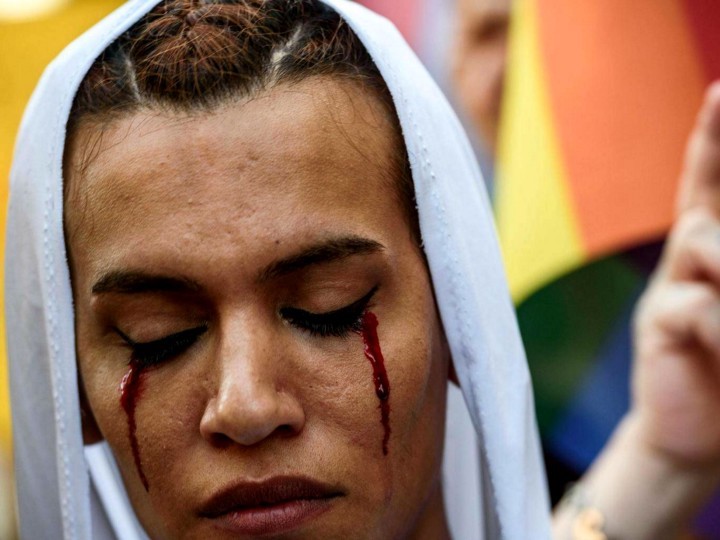 Early this March, two transgender Pakistanis in Saudi Arabia were kidnapped in large sacks, were subject to beatings with sticks and were eventually tortured to death for the dreaded crime of unconventional medical transition of gender, which is legal under Pakistani law.

According to human rights activists, Saudi police allegedly killed a 35-year-old named Amna, and a 26-year-old Meeno, after raids which saw the arrest of 35 other transgender individuals.

Can Trudeau shed a tear for these victims — the forced witches of the Saudi Arabian hunt — who he chooses to keep company with and arm?

Doubtful, considering he’s put that apology under diplomatic credit card and has never expressed regret over continuing the arms deal. Where Trudeau pleaded in his speech that actions which harm the LGBT would “never happen again,” he can’t say the same if it affects Canada’s business around the world.

“We inherited the contract that was signed with Saudi Arabia,” the prime minister remarked from his office in Parliament’s Centre Block, being interviewed by The Star.

“Going forward, we will make sure that we are much more rigorous and transparent about living up to Canadians’ expectations. But, at the same time, we can’t turn around and cancel a contract like that without putting in jeopardy Canada’s business relationships with countries around the world.”

So, in action, Trudeau endorses the LGBTQ community biting the bullet just this once, for old time’s sake, to ensure a more stable economy.

Okay then. How tough is this bullet?

According to several sources for the Canadian newspaper the Globe and Mail, military vehicles that have been used against Saudi Arabian citizens appear to be Gurkha RPVs, which come from the company Terradyne Armoured Vehicles, based in the province of Ontario.

Canada also joins other western states, the US and UK, in the continued arming of Saudi Arabia during their two-year campaign of airstrikes against the neighboring country of Yemen. In late 2016, Saudi Arabia bombed a funeral hall in the Yemeni capital of Sana’a, killing 140 people and injuring hundreds of men, women, and children of all orientations. This is the same campaign leading to the most significant famine in recent decades, leaving many in the nation without food. Can Trudeau assure us that not one of them is of that group he swore to protect?

Rest assured, the Trudeau government proposed legislation that will allow the criminal records of those convicted of sexual activity with same-sex partners to be permanently destroyed; he just isn’t willing to assign the same concern to the lives currently being destroyed by Canada’s supply of arms to one of the world’s many anti-LGBTQ countries.