Iceland’s Down Syndrome ‘Solution’ is Disturbing

When CBS News put out this Tweet a week ago, many initially assumed– and resultantly cheered– what was on its face assumed to be some sort of scientific breakthrough. 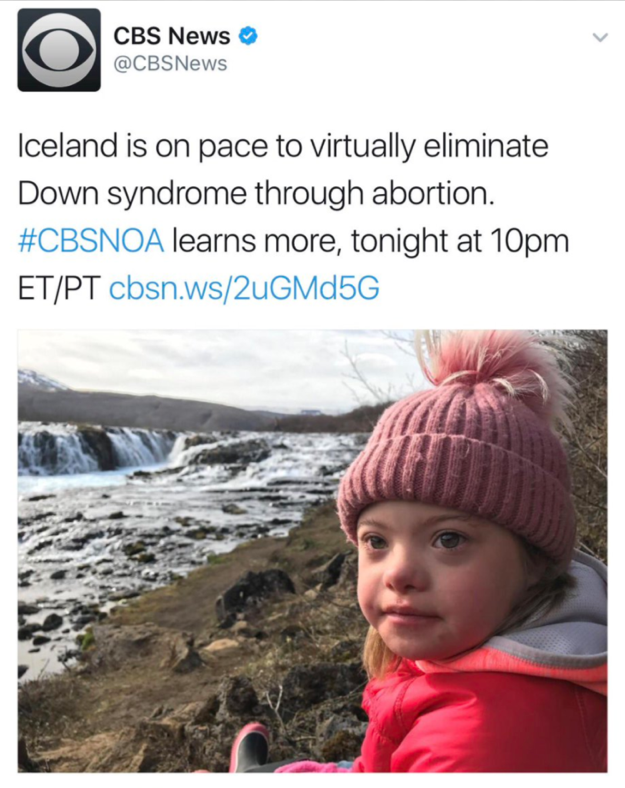 Perhaps some form of genetic manipulation, a la ‘designer babies’, was truly leading to a decrease in the number of children born with Down syndrome in Iceland. Deeper thought on my part was warranted: how, unless the nation had embraced widespread in vitro births, would Iceland be ‘progressing’ toward the elimination of Down syndrome in its population?

The answer, as actress Patricia Heaton pointed out on her own Twitter account, was the government’s strong encouragement that mothers whose unborn children were found to have Down syndrome have abortions: 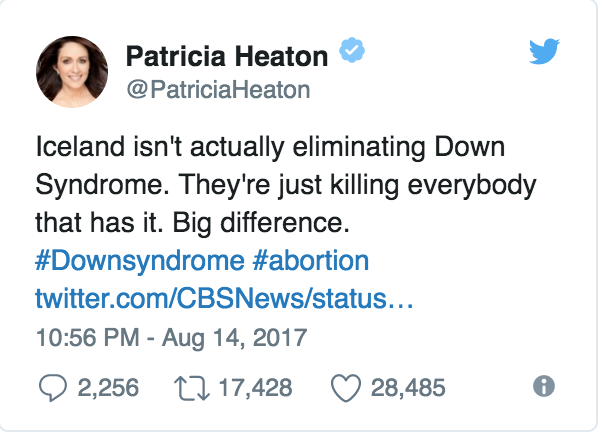 Now, as Heaton pointed out, there is a big difference between ‘eliminating’ Down syndrome, as the CBS News Tweet implied, and merely aborting all babies who are found to have a 47th chromosome. The former would be a scientific breakthrough which could be embraced worldwide. The latter constitutes a government-sanctioned message that says a child with Down syndrome is not worth living or raising. That child, such a policy suggests, could not bring joy to the parents’ life which outweighs the burden of the child’s disability, rendering an abortion the morally righteous option.

This mentality is concerning in numerous respects.

It is true that Down syndrome comes with a number of health effects that are undesirable. According to the National Association for Down syndrome, the 47th chromosome which exists in those with Down syndrome reduces their average life expectancy to 60 years, lower than the average in the non-DS population but still far longer than many other genetic conditions. Approximately 40% of children with Down syndrome are born with a congenital heart defect, and adults with DS are known to develop cardiac disease, hypertension, respiratory infections, and several other health issues.

Still, the life expectancy of 60 years is important. These children, on average, live long lives. Parents, with few exceptions, find that their level of love for and appreciation of their DS child’s unfailingly happy personalities was not only unexpected, but beyond their imaginations.

Yet, the approach Iceland has taken as a nation to the treatment of expectant mothers of Down syndrome children directly implies that the love a mother and father almost always come to feel for their child is worthless. Imperfection, the Icelandic government has said, has no inherent value, and therefore must be eliminated.

A Wall Street Journal column by James Freeman details the way in which Icelandic doctors– at the government’s behest– have “convinced expectant mothers to have an abortion in nearly 100% of cases in which prenatal testing suggests a child will be born with Down syndrome.”:

‘They speak to her when deciding whether to continue or end their pregnancies. Dr. Helga Olafsdottir tells women who are wrestling with the decision or feelings of guilt: “This is your life — you have the right to choose how your life will look like.”’

This is a completely unfair way for doctors to frame such a decision when counseling an expectant mother. Already shaken by the news that their child will not be ‘normal,' a parent’s worst fears are all that consumes them, which is confirmed by the near 100% termination rate. The callousness of the way in which Icelandic doctors characterize abortion helps one to understand how they can take such a one-sided approach in giving counsel:

According to this doctor, it is “more right” to characterize abortion of a Down syndrome fetus as “preventing suffering,” in their words, rather than as “murder.” It is the same reason which compels countless American mothers to do the same for children expected to have more serious disorders. Yet, Down syndrome cannot be equated in terms of medical hardship on the child and parents to, say, cystic fibrosis.

Religious views aside, the downside to aborting one’s child based solely on a diagnosis of Down syndrome is potentially great. An abortion is a traumatizing experience for most women, and understandably so. Even when a genetic defect such as Down syndrome is a near-certainty, the ability to give birth to another child is not.

In retrospect, a parent who is unable to have another child post-abortion would likely rather have a child with an abnormal appearance, a shortened yet still significant expected life span, and an increased risk of health issues than no child at all.

In addition, the stories of parents who find unbelievable amounts of joy in raising a child with Down syndrome cannot be ignored. Such stories were posted to Patricia Heaton’s Twitter feed after her Tweet went viral, and they are very much genuine. If you have known somebody with a DS child, their love for that child seems almost unparalleled.

Icelandic doctors’ decision not to present such details and considerations in their counsel is a critical reason why the abortion rate is as high as it is. Instead, a grim picture of a life consumed by the parents’ and child’s suffering is painted, a callous capitalization upon already shaky emotional stability.

Such a program says much about Iceland’s ruling class, and its citizens’ acquiescence must not be completely forgiven either.

Perhaps the nation’s embrace of socialist policies is driving a movement to reduce medical costs related to children born with abnormalities. Such a motive is not justifiable of a nation-wide effort to have mothers abort their unborn children who happen to have an extra chromosome.

And, the precedent it sets regarding abortion of those deemed anything but normal is very much concerning. This precedent will become even more of a reality as those who are born with Down syndrome in Iceland are increasingly ogled and ostracized as years of Down syndrome abortions affect demographics significantly.

You don’t have to be an evangelical to acknowledge the love that almost always is felt between mother and child, even one with Down syndrome or another disability. Some existences are confined to near-constant misery as the result of a genetic defect. This cannot be said for those with Down syndrome. In many– if not most– cases, those with Down syndrome find happiness daily, and throughout the day, with their parents experiencing the same emotion as a result only of that child’s mere existence.

This genocide at the suggestion of Iceland’s socialist doctors should not be applauded, or even treated with a turned cheek. Don’t let anybody convince you that Iceland has ‘eliminated Down syndrome,' as Tweets have suggested.

They have eliminated a whole category of children, ones who cannot help but wipe a huge grin off their faces. For that, Iceland should be ashamed.