The United Kingdom doesn’t just have a left-wing social justice warrior problem - they also have a problem with their far-right snowflakes.

In a tweet, the progressive-leaning mayor announced he would be speaking to the left-leaning think tank, the Fabian Society, about how “we cannot allow a populist, anti-feminist narrative to take hold in Britain. Men must become better allies and progressives must fight back.”

Today at @thefabians conference I spoke about how we cannot allow a populist, anti-feminist narrative to take hold in Britain. Men must become better allies and progressives must fight back. #BehindEveryGreatCity #Fab18 pic.twitter.com/pbbOPH6zYv

The EDL decided to counter the mayor’s staunchly left agenda with a failed “citizen’s arrest,” accusing the mayor and panelists of “treachery, tyranny” and the grave non-crime of “disrespecting President Trump.”

The story was first published in The Washington Post, their report detailing how UK supporters of the president had built their own “homemade gallows,” featuring a hanging noose and a flag of a white dragon with the bolded words “TAKE BACK CONTROL,” which was wheeled into central London outside where the event was being held. 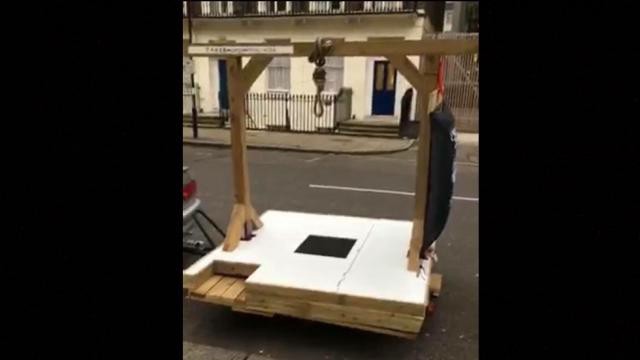 “Ladies and gentlemen,” one of the men cried as they stormed the stage, “we are here today to make a peaceful, nonviolent citizen’s arrest of those named,” listing off names like Khan, the city’s first Muslim mayor, the Labour Party’s member of Parliament Kate Green, as well as two other speakers at the event.

Members of the EDL then told Khan “there’s millions of British people supporting Donald Trump,” a claim which was met with loud laughter from the audience before their own echoed cries of “Out! Out! Out!”

The relationship between Trump and Khan has been considerably tense — the Muslim mayor opposing the president’s previous comments of a “total and complete shutdown of Muslims entering the United States,” and the two exchanging toxic back and forth messages over Twitter which lead Khan to propose his own total and complete shutdown of 45th American presidents entering the city of London.

This was a decision that motivated the far-right group to demand Khan also respect freedom of movement in regards to Trump, shouting “we want him to come to London” while trying to get Khan into a jail cell.

One security guard attempted to intervene, being halted by Russell who insisted “We are under common law jurisdiction! If you touch us, you will be done for common assault. We’re not leaving.” Russell went on to say he called the police before he even approached the stage, telling crowd officers they would assist in the arrest of Khan, somehow.

Russell, who was live streaming the event on Facebook, told reporters outside the conference that his group was called the Pendragons, a nationalist group who are often found as the counter to “The Muslim Brotherhood” and groups they believe to peddle Marxist ideology.

One ITV reporter, among others, identified Russell as a “leading member” of the English Defense League. Once an anti-war and anti-Islamist extremist organization, formerly lead by Religious critic and center-right journalist Tommy Robinson in 2009, the organization is now known for their current administration and members holding Neo-Nazi and white nationalist beliefs.

Russell was also the host of an anti-Islam and Islamism show, which reports have failed to give a name to, which Kent Online reports was raided by police several years ago for hijacking the 90.4 FM radio frequency — a clear breach of the Wireless Telegraphy Act and suppression of that radio channel’s right to broadcast.

And it’s with all this we can add another deplorable name to TrigTent’s list of “Right-Wing Social Justice Warriors.”

In one of our October op-eds, we discussed the growing hypocrisy of the right-wing in the in the free speech movement. It’s no secret the left has a social justice problem with free expression and political dissidents.

I’m liberal-leaning, I covered the multiple ANTIFA Berkeley riots suppressing conservatives like Ben Shapiro and Milo Yiannopoulos. Thankfully, these men returned similar ethics, calling out their own camp when right-wingers Laura Loomer and Jack Posobiec, two former Rebel Media reporters, decided to storm the stage of a Shakespeare in the Park production of Julius Caesar. A play which featured the central character, Caesar, being murdered while dressed in garb similar to that of President Trump, which they tried to shut down for showing “political violence against the right,” the exact opposite of the play’s central anti-assassination message.

Whereas Shapiro and Yiannopoulos condemned the suppression, both having their own thoughts on the play itself, this was not widely rejected by key right-wing figures, with Alex Jones calling the act “patriotic,” Gavin McInnes calling the team who orchestrated this “heroic” and Fox News commentator Sean Hannity having Loomer on as the central guest of his program that night.

It’s a similar case here. It’s a case of snowflakeism, of Stuart Mill style social tyranny, and yet there are no free speech warriors on the right defending Khan. The silence, as always, is deafening.

Khan, however, did stand up and resume his speech like the bigger man. “It’s a pleasure to be here,” he said, “even though we were distracted by the actions of what some would call very… stable… geniuses.