Where the right-wing were quick to accuse former President Barack Obama of conducting a months-long “apology tour,” calling the man weak for condemning unAmerican actions in the country’s past, members of the MAGA-cult are nowhere near as trigger happy on the unAmerican corruption tour of the president’s son, Donald Trump Jr.

Vox journalist Zeeshan Aleem penned an article this week discussing young Trump’s arrival in India — set to be there for a week-long visit where he will conduct business for the president’s former international conglomerate, The Trump Organization. Like all things labeled Trump™, readers should keep an eye out for where the family ties are being made — and where the line between business and government has been so grotesquely crossed.

Landing in the Trump family jet, with Secret Service at his side, outlets like The New York Times are right to say the Indians may find little difference between the governmental Trumps and the business Trumps — it’s always a family affair with these people, and this family makes money.

The newspaper says the president’s son is expected to sell more than $1 billion in constructed units under the Trump umbrella, whether it be from their own company or their many local partners in the Indian area. This is quite the deal for the billionaire family, but why stop there? Everything sells, from vodka to steaks, so why not mix both? These days, the president’s son can be seen running advertisements in Indian newspapers that read:

“Trump Is Here — Are You Invited?” 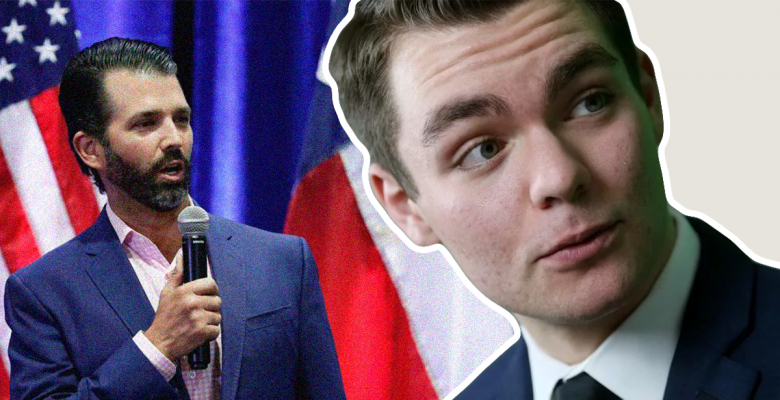 You see, for just the low low price of a $38,000 booking fee, potential homebuyers will have the opportunity to “join Mr. Donald Trump Jr. for a conversation and dinner”! Just before the supposed private citizen gives his own foreign policy speech at an Indo-Pacific relations event!! Yes, that global business summit where India’s own Prime Minister Narendra Modi will be in attendance!!

Jordan Libowitz, the communications director for Citizens for Responsibility and Ethics in Washington, known for being a Trump critic, commented to The Washington Post saying this is corruption on its face:

“Trump’s company is literally selling access to the president’s son overseas. For many people wanting to impact American policy in the region, the cost of a condo is a small price to pay to lobby one of the people closest to the president, far away from watchful eyes.”

And India is no isolationist utopia the likes of Marvel’s fictional Wakanda. Condos can be a small price to pay for potential foreign policy influence over Pakistan, the smaller Islamist country with which the Indian government has kept on harsh terms, exchanging their mutual threats of nuclear disasters. It was only recently that Trump tweeted about his removal of their military aid, an act that could lead to potential escalations in bombings in the region.

A simple whisper in the president’s ear from junior, their condo salesman and dinner host, could sway the administration on issues like China, the trading competitor of India whom the president has dealt tariff blows against and has criticized for their foreign policy regarding North Korea.

It struck me as curious why President Trump, currently facing one year in office as America’s most unpopular president in polling history, would think his presidential status would boost his company domestically. The New York Times, Trump’s favorite newspaper to complain about, reported on his revenue in the divided states of America — and it doesn’t look pretty.

The Trump Organization went down 3% in revenue throughout the country. Attendance at Trump golf courses in the Northeast and on the West Coast have declined (even with the president’s frequent attendance). NBC reported a Manhattan condo complex voting to remove Trump’s name from the building because his divisive presidency saw a decline in sales. Why would he think this was a good idea? Unless… the plan wasn’t to make his American sales great again… but his global sales instead.

This is where I have to give credit to Vox, scanning over his records to find his Indian appeal to find their bidding is top dog. Currently, The Pew Research Center found that Trump’s approval rating in India was about twice his approval rating in other countries in the region like Japan.

Among the elites, Indian developers will be happy with the five projects being overseen by the Trump Organization —their eyes set on Mumbai, the New Delhi suburb of Gurgaon, the western city of Pune and the eastern city of Kolkata — making this venture where the company owes their biggest market success to date.

The Washington Post reports that through licensing deals alone, where the company just sells the use of their name on buildings, India has generated between $1.6 million to $11 million in revenue since 2014 - before Trump even entered the 2016 presidential race.

Pankaj Bansal, director of the real estate firm M3M India, recently spoke to CNN regarding the interest in Trump branded goods, services and their interchangeable personalities:

“It’s all about status symbols. People want to be able to say: ‘Come, let’s go have a drink at the Trump Tower.’ That’s what we’re trying to tap into.”

And, no doubt, people who want to buy the United States at the price of a drink or a condo at Trump Tower want to tap into that as well.

Outlets like Breitbart, Infowars, The Daily Caller, The Daily Wire, the whole rat pack are nowhere to be seen shouting “unAmerican” at such close ties to a world power, with open invitation for a dinner date for corporate-state collusion.

They’re nowhere to be seen comparing this to the Clinton Foundation corruption scandals that saw thousands of dollars flow through the organization, sealing the deal on foreign policy decisions that may have been swayed if not for a big fat wallet.

It shouldn’t have to be explained why conflicts of interest, whether they lead to the right policies or not, are an unprincipled stance that could see bad government sold to the highest bidder — but when politics are run by children, it’s no doubt they’ll break the rules like children too.