Cultural Appropriation Prize: What The Hell Was Hal thinking?

Hal Niedzviecki has resigned after five years as the editor of the Writers’ Union of Canada magazine after intense backlash in response to his opinion article, “Winning the Appropriation Prize” published in a recent issue.

Write, a publication for the union’s members, published a short piece titled “Writer’s Prompt” for the spring 2017 issue. Ironically, in this issue of the magazine dedicated to indigenous writing, Niedzviecki opened his article with: “I don’t believe in cultural appropriation. In my opinion, anyone, anywhere, should be encouraged to imagine other peoples, other cultures, other identities.” Editor of the magazine for five years, Niedzviecki goes on in his editorial to note that most Canadian literature (canlit) is written by people who are “white and middle-class”, and exhorts those same white, middle-class writers to look outside of their community and write about “what you don’t know” in an effort to “explore the lives of people who aren’t like you.”

A sociological term, cultural appropriation is used to describe the adoption of elements or practices of one cultural group by members of another. As soon as the issue started dropping into member’s mailboxes, writers immediately took to social media to declare themselves “disgusted” about the “clueless and thoughtless” article. Writer Jennifer Love Grove pointed out what most are arguing about: “Hal N. writes in Write magazine that canlit is too white and middle-class, and the solution is that white, middle-class writers should appropriate marginalized cultures more?”

Helen Knott, one of the indigenous contributors to this particular issue, wrote on Facebook: “I am seriously disgusted that someone would sue the Indigenous issue of Write as a jump point for a case for cultural appropriation on the backs, words, and reputations of the Indigenous writers featured in it. It’s not enough that we are finding our voices, reclaiming our ability to tell stories, and heaving to heal to tell these stories. But people want to tell them for us.”

Write magazine editorial board member Nikki Reimer publicly called out the Union, as she was sent a copy of the issue but was not given the chance to read and provide input. She called the column “clueless and thoughtless,” marking the magazine as an unsafe platform from which indigenous and racialized writers can share their work.

The Writers’ Union of Canada quickly issued an apology for the piece, announced Niedzviecki’s resignation and pledged to review the magazine’s policies.

“The Writer’s Prompt piece offended and hurt readers, contributors to the magazine and members of the editorial board,” said the statement. “We apologize unequivocally. We are in the process of contacting all contributors individually.”

But the drama doesn’t stop there. Niedzviecki eventually started speaking out, and gave- in my opinion- one of those non-apologies writers are famous for.

“I started out kind of flippantly and I think that I failed to recognize how charged (the term cultural appropriation) is and how deeply painful acts of cultural appropriation have been to indigenous peoples,” he said. Translation: I didn’t realize how offended other people would get. Niedzviecki’s non-apology is reminiscent of writer Lionel Shriver’s ignorant speech at the 2016 Brisbane Writers Festival, where she stated that she is “hopeful that the concept of ‘cultural appropriation’ is a passing fad,” leading to walkouts and the festival pulling her speech from their website and organizing a panel-style discussion on cultural appropriation in response.

Writers like to stick together in their ignorance apparently. After the announcement of Niedzviecki resignation, Canadian writers took to Twitter to protest the action in one of the most offensive ways I can imagine: they started offering money for an actual appropriation prize. Nope, not kidding. Former National Post editor-in-chief Ken Whyte, started the supposed joke:

This sparked a slew of high-profile Canadian journalists to bond together, raising a metaphorical $3000 for the award and various expenses for the ceremony. 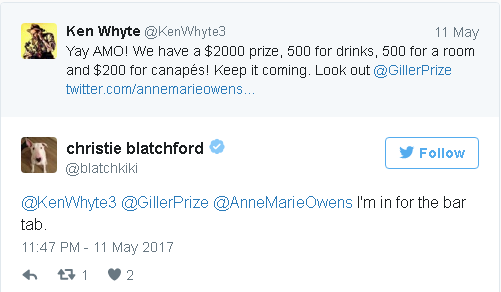 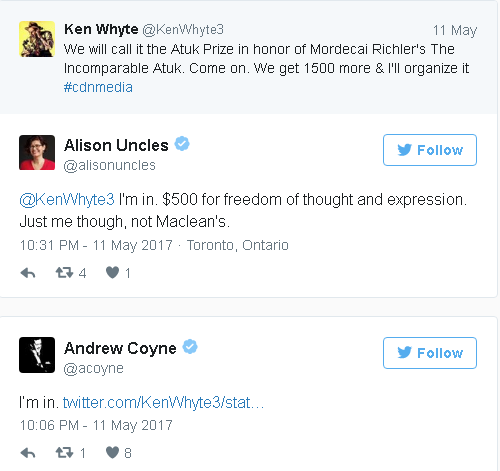 At least there are real-life consequences for these idiots. CBC News announced a shuffle in the leadership of The National following Steve Ladurantaye’s social media support for this appropriation prize, even though he tweeted an apology for his “dumb, glib tweet about a dumb glib idea.” And National Post’s editor-in-chief Ann Marie Owens lamented her backlash as well, tweeting “Apologies for any offence caused by what began as free speech protest threat--Twitter no place for glib.” Once again, statements that reek of non-apology.

Look, it’s not that people can’t take a fucking joke. I understand that Niedzviecki’s piece was satirical in nature, and his language choices weren’t meant to be taken so seriously. I do applaud his overall message encouraging new ideas, development, and exploration for improving Canadian literature. But the flippant attitude most of these writers are taking with cultural appropriation is incredibly ignorant. I have news for you: cultural appropriation exists, even when you don’t fully understand or believe it.

Yes, I know. Just because people are offended by something doesn’t mean that they’re right. But when your pool of supporters are all pale-skinned people coming from a place of privilege, you should probably take a step back. I’m not saying they’re all racists just because they oppose the ‘liberal’ perspective that cultural appropriation exists. They just don’t think cultural appropriation is a big deal because to them, it’s not. It’s not about the supposed free speech that many of them claim they were standing up for. When Niedzviecki wrote his denial of cultural appropriation, it’s like they were applauding him speaking out and making this issue go away. Hint: it doesn’t.

Sharing of cultural aspects- like food, fashion, music- are one of the most exciting aspects to encourage growth and develop of creativity and new ideas. But what none of these white writers seem to understand is why their words and support of an appropriation prize is so offensive. It’s not the “charged” term of cultural appropriation that’s pissing people off; it’s the very act itself. Do they not realize how callous it is to deny that indigenous and racialized writers face obstacles that they do not?

When Indigenous and racialized writers took to Twitter and Facebook to express their outrage, Globe columnist Elizabeth Renzetti argued that "unpopular ideas shouldn't be silenced" as if that's all cultural appropriation is: "unpopular." It's also no big deal to Walrus magazine editor Jonathan Kay, who tweeted "The mobbing of Hal Niedzviecki is what we get when we let Identity-politics fundamentalists run riot: sad & shameful." It's also no big deal to the National Post's Christie Blatchford whose column was headlined "Magazine editor the latest to be silenced for the sin of free speech." Yet there were literally hundreds of people trying to tell these writers their stories, and how they feel as though their history and culture is being exploited.

Niedzviecki is right about one thing:-- white, middle-class writers need to "explore the lives of people who aren't like [them]."

But you don't do that by stealing their stories. You do it by reading them, by listening to them and by sharing them. Use your platform and voice to raise them up, instead of using their experiences and history to bump up your own status.