Confronting Terrorism: We Need To Start Being Honest

It’s another week, and we have to talk about another terrorist attack. I for one am sick of it. Not because I just want to ignore the reality of what’s going on—as many people seem to do. But because no matter how many people are killed, nothing seems to change.

In the aftermath of 9-11, our government got serious about confronting terrorism. We had several years where it seemed that that threat was being beaten back. But after the appeasement policy of Obama and other liberal world leaders, radical Islamic terror has grown to new heights.

We’re at a point where no place is safe. Every corner of the globe is a potential target. And instead of our governments being honest about the problem, they continue politically correct policies that will mean certain death to innocent civilians.

Time and again conservatives who want to confront the issue, who want to call out the real source of the problem- radical Islam- are branded as racist. A real debate that can lead to change and the eradication of this threat is shut down because liberals deemed it unacceptable.

I’m sorry but how many more kids need to die before we start making changes? How many more children need to be torn to shreds before the limp-wristed, weak-willed, politically correct cowards of Europe and the United States actually nut up and do their job?

This problem isn’t going away. And unless we work to root out Islamic extremism from our countries, we won’t have countries to defend.

Not only are conservatives branded racist for wanting to end terrorism, but they are also treated like criminals for saying the “wrong” things. It’s almost as if liberals want terrorists killing our families.

Host Tucker Carlson opened the segment by stating that while authorities are investigating the incident, “it’s not their only priority tonight. They’re also keeping an eye out for crimethink on the internet.”

“Those are unapproved thoughts that people might express, including those from Daily Mail columnist Katie Hopkins…”

As The Guardian reports, Hopkins’ tweets wound up being reported to police, who confirmed they were reviewing and assessing them. (Milo)

Here is one of those evil tweets, for those curious: 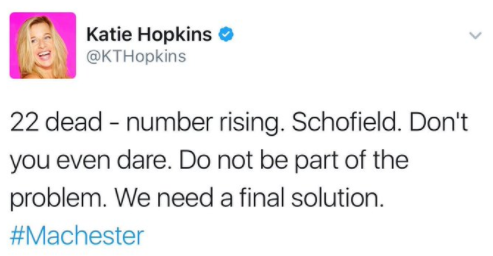 So, a loser can blow himself up, killing over 20 children and injuring many more, but the cops are going to investigate a tweet from a journalist? A person who is understandably upset about a horrendous terrorist attack, who is calling for her people to actually act, is considered the real criminal.

Compare that to the idiotic things liberals are saying in response to yet another terrorist attack.

Perhaps the worst was from BBC’s Katty Kay.

“Europe is getting used to attacks like this,” she says. “We have to, because we are never going to be able to totally wipe this out. As ISIS gets squeezed in Syria and Iraq, we’re going to see more of these kinds of attacks taking place in Europe and Europe is starting to get used to that.” (Milo)

Yeah God forbid we do anything about this. God forbid we take strong action to wipe out ISIS, vet immigrants who have pro-jihadist sympathies, and work to expose Islamic extremism in our societies. God forbid the leaders of Europe follow Donald Trump’s lead by urging Muslim leaders—both political and religious—in driving out extremism from their communities.

Was Kay’s ignorant comment reported to the police? Was she reprimanded by the establishment for “wrongthink”? Was there an attempt to censor or punish her for saying something utterly stupid and ultimately un-patriotic towards her country (and the victims)? Of course not. She’s a host for the biggest news outlet in England—arguably the world—and is allowed to express those toxic views. All because she is towing the liberal line.

But we have plenty of idiots on our side of the pond ignoring the real problem. In the wake of this terrible terrorist attack, the empty-headed pundits on CNN were allowed to float the most ridiculous notions imaginable.

Paul Cruickshank appeared on Anderson Cooper’s AC360 and brought up the possibility the attack was carried out in hopes of pinning the blame on Islam.

“…given the fact that they’re looking into this real possibility, and it is there would appear some evidence that this was a suicide bombing– that certainly takes you down the Islamist terrorist direction,” he said. (Milo)

Excuse my French, but are you fucking kidding me!? A loser murders children, ISIS celebrates this as a victory for Islam, and this asshole claims it was done by the right to attack a religion?

Putting aside for a moment that every reasonable person knows the difference between a peaceful Muslim and a terrorist, why would anyone believe right-wingers could do this? Conservatives understand that it’s Islamic extremism that is fueling terrorism, not all Muslims. Only liberals seem to think the two are one and the same.

Not to mention the fact that the right doesn’t need to stage an attack, since jihadists are doing a good job at executing an attack every nine days.

And at a time when families are mourning their lost loved ones, when children’s innocence has been ripped away forever, this piece of crap has the audacity to say something so utterly evil and stupid.

You’ll even be allowed to talk on Anderson Cooper’s show. Anderson should know better.

Now we know the Manchester bomber was a Muslim extremist. We know his motivations were the same as every other radical, Islamic terrorist. Not a huge surprise. So why are people like Cruickshank allowed to keep working?

Of course, with every attack, celebrities come out and offer their empty words. Most of the time it’s empty pabulum that is forgotten in a day. Celebrities rarely put their money where their mouths are. Rarely do they stand up for the slain, call for real action, or do anything to change the situation.

But this time I wanted to highlight the hypocrisy.

Pop-star and proud ‘Resistance’ member Katy Perry has the solution to Europe’s Islamic terror problem: get rid of borders and barriers and let everyone co-exist.

According to Breitbart, Perry – who lives in a “super secure gated community” – made her remarks on Elvis Duran and the Morning Show, suggesting people “unite” after yesterday’s bombing outside Manchester Arena that killed 22 and injured scores more.

“Whatever we say behind people’s backs, the Internet can be a little bit ruthless as far as fan bases go but I think that the greatest thing we can do is just unite and love on each other,” she said. “No barriers, no borders, we all just need to co-exist.” (Milo)

Katy’s stupidity and ignorance of the situation is on full display this time. Oh, we should just “love on each other”! How silly of us for not doing that. All those kids that were blown up were hate-mongers who were going to that concert to spread dissent and violence. Oh wait, they were loving on each other, as it was a fun, Ariana Grande, pop music concert.

It was an asshole full of hate that blew them up with nails and shrapnel.

I’m guessing ISIS and their disciples don’t listen to Katy Perry. I doubt they are going to question their deeply-held beliefs that the West should be destroyed because she says “No barriers, no borders, we all just need to co-exist.” Maybe that advice works on Sesame Street, but we live in the real world.

There are real, evil people out there that mean to do us harm. All this stuff we are enjoying in the West? Like freedom, art, culture, music, and careers? That exists because people fought to make it exist. Evil forces are out there that want to deprive us of it. Without military, cops, and leaders making the tough decisions to keep us safe, IT ALL GOES AWAY.

Entitled Katy Perry refuses to say what really needs to be said, that these evil people need to be driven out of our society. That strong measures need to be put in place to make sure jihadists can’t just waltz into our countries- that places in the Middle East that are propagating this ideology need to be brought to justice.

By not confronting radical Islam as the source of these attacks, the left is allowing that ideology to remain. Worse yet, it’s growing. But if we’re honest about the fact that it’s a virulent strain of Islam motivating these killers, we can urge the many reasonable Muslims of the world to confront and eradicate extremism.

If imams and Muslim leaders ostracized and condemned this ideology—the real wrongthink—that is turning moderate Muslims into extremists, fewer would, in fact, support terrorists. If they urged their communities in Europe and the U.S. to assimilate, their children would grow up to love their countries, like every other immigrant family.

And if the nations of Europe and the U.S. actually vetted their refugees and immigrants—confronting those people who have a history of extremism—fewer children would be blown up at concerts.

It’s really not that hard to work out. Yet liberals are applauded for empty words about unity and love. And the jihadists plan for the next attack.

Again and again, after every attack, brain-dead liberals come out to protect innocent Muslims of “Islamophobia.” Muslims in the West are doing just fine. Why aren’t these liberals concerned for the many Muslims in Africa, Asia, and the Middle East that are being killed by extremists? If they really cared about the well-being of this religion, why aren’t they concerned about the real threat to their lives—jihadists?

It’s all smoke and mirrors. Empty words to excuse the situation, do nothing, and go on with business as usual. Until the next attack occurs. Liberals are sticking their heads in the sand, too cowardly and pathetic to admit it’s their own policies that allowed this to happen. Unlike real leaders, they aren’t changing their stances so that fewer people are killed.

Remember it was only two months ago that a man attacked many people in London. Did we already forget? Now more people in England are dead.

Obviously, what we are doing isn’t working. And if we continue to ignore people like Katie Hopkins, like our own president, branding them as racist because they want to save lives, the deaths will only continue.

There will come a time when we won’t even have nations left to protect.