Black Lives Matter Toronto (BLM TO) once again overshadowed a worthy cause with their lack of control and ridiculousness. This past weekend, Anti-Islamophobia rallies took place all over the world to protest President Donald Trump’s travel ban on Muslim majority countries. But in what is now an unfortunate pattern, statements from BLM TO and their leaders eclipsed any of the necessary discussion on white supremacy, religious persecution or the issues with Trump’s executive orders.

A large crowd peacefully marched down University Avenue before heading to Yonge-Dundas Square, with numerous speakers addressing the crowds emphasizing the importance of standing up to discrimination and hatred. But it’s the video of BLM TO co-founder, Yusra Khogali, that’s been going viral.

Is this girl fucking serious? What the hell is she smoking? Alright, Khogali condemning Prime Minister Justin Trudeau for tweeting about Canadian acceptance of refugees with no follow-through could be a good talking point. He claimed that Canada would accept refugees regardless of faith, and his timing implied that those banned from the US thanks to Trump’s ban would be included in that. But after a few days, Canadian Immigration Minister Ahmed Hussen said that Canada would not be increasing the number of refugees it planned on accepting. That’s a justifiable reason to be upset, and one could even argue Trudeau’s tweet was just lip service. But calling Trudeau a “white supremacist terrorist” may be one of the most idiotic things I’ve ever heard. What world is Khogali living in?

The Black Lives Matter community stemmed from problems in the US with cop killings, increased incarcerations, inequality in schools and communities. A lot of people write off the campaign with the token “All Lives Matter” or bringing up crime-on-crime statistics. There’s already been some discussion on TrigTent about whether their approach and ideology are even justified, but the fact of the matter is, they are in our world, and we need to handle their presence right now.

I fully acknowledge that there is a problem. There is a long, torrid, and dark history between police and the black community full of violence, death, and constant discrimination. According to the Toronto Star, blacks make up 8.3% of Toronto’s population, but account for 25% of the paperwork police fill out after questioning them- and a large majority of these stops have no legal reason. Harsher minimum-sentencing laws target low-level crimes by people of color, while their light-skinned counterparts don’t experience the same type of punishment. As Black Lives Matter’s website puts it:

“Black Lives Matter is an ideology and political intervention in a world where black lives are systematically and intentionally targeted for demise. It is an affirmation of black folks’ contributions to this society, our humanity, and our resilience in the face of deadly oppression.”

BLM TO became a spin-off from this movement, but recent events make me question why they’re allowed to continue to capitalize and even hold events. If anything, BLM TO is hurting the legitimacy and efforts being made by Black Lives Matter as a whole. Whenever they receive media coverage, it’s negative. Of course, media always focuses on stories that bleed i.e. negativity, scandals, etc., but all they seem to do is bring bad publicity.

My first real exposure to this chapter of Black Lives Matter arose when I heard about their protest outside Toronto police headquarters where they peacefully slept outside, singing and voicing their concerns in the wake of Michael Brown’s shooting death. Having camped outside for almost two weeks surviving on donations, members of the group then decided to visit Ontario Premier Kathleen Wynn’s private residence. That’s right. Not her office, not a city of Toronto building, or even any sort of government agency location; they went to her home. The flowers, cheese, signs and tent they left prompted a police hazmat team to secure the area. Instead of letting their protest have an effect, the group created a security issue for an elected politician and her partner in order to wrangle a meeting with the province’s anti-racism directorate. The incident sparked a response from Toronto Mayor John Tory, who elected to meet with the group shortly after.

Perhaps this is where they started learning their ridiculous behavior. Pulling such an invasion stunt got them media coverage, meetings with politicians, and an opportunity to reach a huge audience. But shortly after, co-founder Khogali was on the news alone.

Khogali was called out for a tweet she posted two months prior which was then deleted. 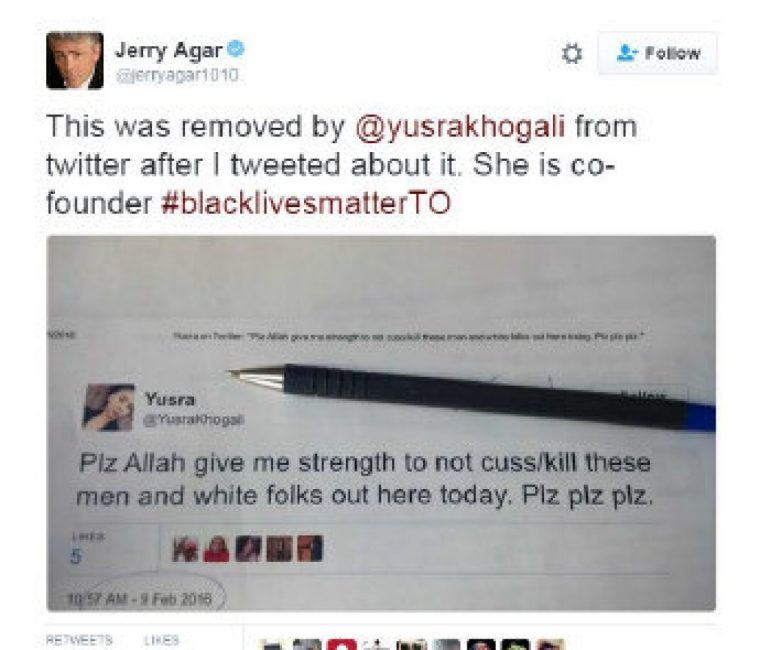 She attempted to defend herself once the controversy began, but reading through the opinion piece just made me annoyed. With an overall tone of ultimate victimhood, Khogali writes of how she was vilified for telling the truth. Look, sweetheart, even if you’re telling the truth, writing about having desires to kill white people when you’re supposed to be working to call out racism is just ridiculous. I subscribe to the concept of racism is not just discrimination based on skin color, but that racism is discrimination plus power, but this off-handed comment undermines everything people have been working against. You don’t get to be a leader of an anti-racist group and then make comments like this about white people.

But okay, everyone makes mistakes. Sometimes we have a slip of the tongue, or we post things online we wish we hadn’t. It happens. If someone else had done this and they had a corporate job, they might have been fired, but Khogali had enough support in her community that she continued on. Fine.

Then I hear about BLM TO and the Pride Toronto parade. Having been to Pride Toronto a time or two, I can personally tell you that the city does not skimp on its pride celebrations and parades. Those Canadians know how to politely party, even if it does involve significantly less clothing than what would be considered decent. But this past summer, BLM TO were invited by organizers as guests of honor in the parade, which was a nice gesture on their part. The LGBTQ community and people of color haven’t always had the best relationship, but in light of recent events and tensions in the community, Pride Toronto wanted to include those feeling discriminated against in their country. How did BLM TO repay this olive branch? By taking the parade hostage and instigating a sit down that held up the entire parade and celebration. And like true kidnappers, they made a list of demands to Pride Toronto before agreeing to continue and let the thousands of other people celebrate. Desperate organizers were forced to sign a list of actions this group decided were necessary to keep an event they’d spent a whole year planning from being hijacked and dismantled by this so-called activist group.

It gets worse. One of their demands was the removal of Toronto police from Pride celebrations. Absolutely, there are tensions between the black community and police. I’m hard-pressed to find the same level of discrimination that the American black community is experiencing, but I guess that’s beside the point. I’m not suggesting that shitty treatment based on racial profiling doesn’t happen in Canada, and there are numerous incidents of our northern neighbor’s cops shooting innocents, but I’m not sure those warranted a complete barring of police from an event that’s supposed to be about inclusion, tolerance, and acceptance. For more on this particular event, I’d recommend reading Nigel Lokai’s thoughts on the subject here.

And now here we are. A few weeks into an insane amount of executive orders from Trump that may or may not be legal, and there are many of us who wake every morning asking for a damage report from last night. Whether it’s a new executive order, blatant lies from the White House, or protest reports, Americans are exhausted. I’m sorry Khogali, but you don’t get to capitalize on our instability and pain. Calling your Canadian Prime Minister a “white supremacist terrorist” does nothing but reflect your immaturity and complete disconnect from reality. We have an actual white supremacist creating a shadow government and intelligence community, with a guy who’s previously been rejected from a federal judge position because of his racism about to be confirmed as attorney general. Our president is actively signing executive orders that have the vague language to allow for discrimination, and is supported by the KKK. Do you even know what a white supremacist is? Your Prime Minister not only looks like he should be on the cover a teeny-bopper magazine, but the guy proudly makes his cabinet 50% female and is stocked full of POC, and even marches in Pride Parades. He dances at Indian weddings, is bilingual, and can take over social media with one accidental shirtless selfie on a hike.

Trudeau is not what Khogali, and by extension, BLM TO are claiming. If anything, the reverse is true. Trudeau is a visible-minority supremacist, obsessed with using opportunities like cabinet shuffles to signal how race, ethnicity, and gender may be more important than experience or merit. I’m not denying the other comments Khogali made to the cheers of the crowd. Yes, Canada- and pretty much all of North America- was founded on the genocide of indigenous people, and a systematic oppression and silencing of their struggles and history were employed to erase these atrocities. Call Trudeau a liar. He’s a politician, of course he lies. And from what I’ve heard recently, there is plenty to criticize Trudeau about.

Perhaps Khogali should consider stepping down from leadership, because her incendiary comments do nothing but reflect badly on BLM TO. It’s unfair to let the actions of one person represent an entire group, but when leading an activist group trying to make a change, making comments such as the ones she has is detrimental to the cause. Her unfounded comments have already distracted from the other very real issues the protests were calling on, like a revocation of the Safe Third Country Agreement to help refugees. With Khogali at the helm, BLM TO isn’t raising awareness or focusing on issues that affect the black community. They continually cause chaos, and not in a constructive, protesting manner. Yes, protests should disrupt the status quo and wake the public up from indifference, but BLM TO aren’t starting protests to spark conversations towards solutions. They are making problems, not solving them.

Social justice should be about resolving issues that exist and preventing new ones from popping up. Regressive justice and insults that aren’t even true seem to be the approach of BLM TO right now, and it does nothing but ruin any sympathies and support people may have had for the movement. If they want to be accepted as a credible organization, they need to start questioning the consequences of their actions and words. BLM TO is just collecting controversy after controversy, and providing more fuel for the alt-right and those who oppose immigration and minorities to dismiss and continue in their ways. If anything, they’re inspiring new haters of the group and the movement. There are very real problems going on in the world, and you’re just making yourselves look idiotic.