You’re Fighting To Get Fired: The Fight For $15 Is The Wrong Fight

Life is expensive. To be a fully functioning, contributing adult to society involves working, paying bills, and spending money. Hopefully, you’re engaging in more than just those actions so you can satisfy your need for social interaction, creativity, and other artistic ventures to feed your soul, but there is a certain degree of expectation that you pay into the culture and something larger than yourself to keep a civilized society going.

We all know this. And we know that there are discrepancies in wages and salaries across the board. There are some jobs that reward you more in money. Often, these are based on the necessary skills, education, and experience you’re bringing to the table. Sometimes it’s not, but that’s a different discussion.

I wish I could wholeheartedly support the Fight for $15. I really do. As someone who put herself through school working two jobs while attending classes full-time, I think it’s absolutely ridiculous that I was working 40-50 hours a week between two jobs, and was only able to meet tuition costs because my university offered me a partial scholarship. And I wasn’t trying to support anyone but myself and my dog. I can’t imagine attempting to support a family on the pennies that I was getting paid- or live a healthy, fulfilling, engaged life.

The mandate from the Fight for $15 sounds beautiful. The movement started with a handful of fast food workers in New York who went on strike to raise their wages to $15/hour and union rights. According to their site:

“Today, we’re an international movement in over 300 cities on six continents of fast-food workers, home health aides, child care teachers, airport workers, adjunct professors, retail employees – and underpaid workers everywhere. For too long, McDonald’s and low-wage employers have made billions of dollars in profit and pushed off costs onto taxpayers, while leaving people like us – the people who do the real work – to struggle to survive. That’s why we strike. We can’t feed our families, pay our bills or even keep a roof over our heads on minimum wage pay…[W]e won’t stop fighting until we turn every McJob into a REAL job.”

And you know what? They’ve been winning. The states of New York, California, and Washington D.C. have approved conditional legislation to raise minimum wages to $15/hour over the few next years. It initially made me happy when I heard. Republicans and conservatives could be doomsday bringers all they want, but there it was; they were victorious in their fight!

On November 29, the movement staged protests in 340 cities across the US in a coordinated effort to unite all the industry workers and cause disruptions in many locations - whether it be at the O’Hare airport, McDonald’s in Kansas, Boston, or in public spaces in Minnesota and Milwaukee. These inevitably lead to many getting arrested, including a state senator protesting alongside fast-food workers in Cambridge outside Boston. In fact, other elected officials in Newark lent their presences to the crowd. But the successes with these protests and the victories in New York, California and Washington have revealed how some corporations are dealing with the increase.

Spoiler: it’s not looking so good for the workers.

McDonald’s, enemy number one in the Fight for $15, have revealed their solution: installing ordering kiosks in their stores. They’re joining Panera Bread, who unveiled their “Panera 2.0,” with around 50% of their stores working on ordering kiosks, alongside fast-food giant Wendy’s. As Carl’s Jr. and Hardee’s CEO Andy Puzder said, “If you’re making labor more expensive, and automation less expensive- this is not rocket science.” 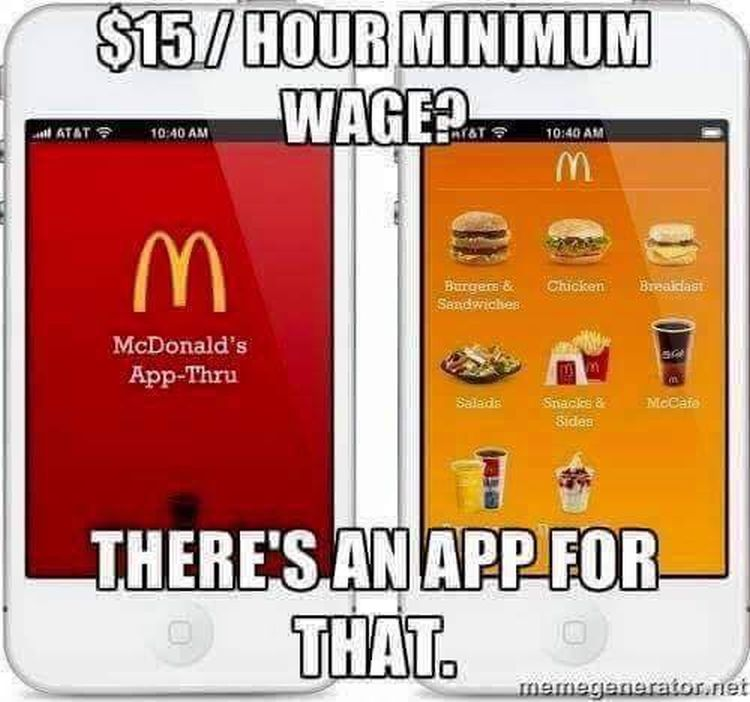 Therein lies the problem. It’s the ugly truth of raising the minimum wage. We’d all like to think that it’s a simple matter of paying people enough to be able to live, but it’s much more complicated than that. Big corporations are investing in automated systems while small businesses and family-owned restaurants are now struggling even more than they were.

They include a bookstore in Roseville, a pub in Fresno, restaurants, and bakeries in San Francisco, a coffee shop in Berkeley, grocery stores in Oakland, a grill in Santa Clara. Nearly one-quarter of restaurant closures in the Bay Area cited labor costs as one of the reasons for shutting down operations. And just this past week, a California-based communications firm announced it was moving 75 call center jobs from San Diego to El Paso, Texas, citing California’s rising minimum as the “deciding factor.” The problem has become so widespread, a website was started called the Faces of 15, to document the unfortunate consequences of these minimum wage increases.

Historically speaking, raising the minimum wage does not automatically translate to lower employment rates. That’s an urban myth conservatives constantly use to discredit pay increases (except their own, of course). In fact, the National Employment Law Project crunched the numbers, and with seven decades of data, they found no correlations between minimum wage increases and employment levels. That’s actually their article headline, so you know it’s pretty important because that’s way too long for the top of a page. But what that historical data can’t take into account is the insane advancements in technology over the last few years. I mean, Uber already has their self-driving cars on the road. This is the dawn of a new age, and I don’t think it’s an unreasonable leap to assume the antiquated minimum wage model needs to change. In fact, general wage models need to change.

The Fight for $15 is fighting the wrong fight. As we’ve already lamented, perspectives on manufacturing and unskilled labor in the job market need to shift. We can’t expect the same market as previous generations. Automation and technology have created a whole different beast. I can already hear the socialist and communist comments now, but here’s my unpopular opinion: guaranteed annual income should be the way of the future.

Minimum wage jobs tend to be classified as unskilled labor, and today, companies and restaurants are turning to technology to help fill the void. But if basic income were to be offered, it would provide the opportunity for these individuals to actually study and specialize in a particular field to pursue careers. It’s the ultimate social assistance program, which instead of forcing people to use food stamps and other demeaning set-ups for government assistance, would give people a chance to not only feel like but function as a contributing adult in their local community and economy. It’d provide a chance for people to become “skilled” and experienced, as opposed to constantly working numerous dead-end jobs to try and make ends meet.

It’s a philosophy Ontario is attempting to test. The Canadian province is currently in the process of running a trial to test the benefits and plausibility of a basic income. There are real possibilities of this actually working. The logistics of implementing something like this would require astronomical planning and accountability, but it may be the only solution that will help the working, lower-income populations without disastrous repercussions now that technology is offering businesses an alternative to hiring people. Those Canadians could be onto something great.

Perhaps we should rename the movement the fight for $15,000 so it can actually do some good.