For the second week in a row, Wonder Woman has topped the U.S. box office. It has even beaten a Tom Cruise vehicle—something that few people would have expected. It had the biggest box office opening weekend for a female-directed film. So far it has made $205,002,503 domestically, only a shade off of what Man of Steel earned in the same amount of time.

This is even more impressive considering the stinkers the DC Universe has been producing. I can safely say after the train wrecks of Batman V. Superman and Suicide Squad, few people were anticipating such a massive hit.

But through all this celebration, there is a vitally important question we must be asking: is Wonder Woman feminist enough?

A reasonable person, with at least half a brain, would say yes. Wonder Woman, a film that features a strong female lead—a superhero that kicks many butts—is definitely feminist. Doesn’t she epitomize feminism? Isn’t featuring a confident, courageous, heroic woman—that in no way is belittled or abused by a man—the very soul of feminism?

Lol, my precious reader. If you believe this, then you are sorely naïve. Feminism is no longer simply about celebrating womanhood; it’s a many-headed monster of social justice causes!

A movie that celebrates a female hero—at the same time not attacking men—is as far away from modern feminism as, I dunno… the Bible! Modern feminism isn’t about protecting and ensuring women’s rights and equality. It’s definitely not about maintaining a healthy relationship between men and women.

Modern feminism is about pushing a toxic, liberal ideology. One that, overall, seeks to denigrate men (especially white “cis” men—men that are actually born men) and elevate just about every sub-group of genders and races imaginable.

You see, once upon a time feminism had a real goal. There was an era where women had fewer options. Worse, they were treated very poorly by men in society. Yet once progress was made, socially and politically, feminists needed more reasons to exist. I mean, once you win the battle, are soldiers still needed? Ask Douglas MacArthur.

So, feminism became a political structure that had to justify itself, much like every other group on the left. With legitimate battles being won, they had to find a new frontier to fight over—even if that frontier only existed in their minds.

Ironically feminists need the patriarchy, or at least the lie that such a thing exists, or they have no reason for being.

That is why, long before Wonder Woman premiered, feminists were sharpening their claws and getting the pitchforks ready. A movie that celebrates feminine strength—with a straight, white, in-shape, beautiful woman—is of course sexist.

Around the 1:50 mark, lead character Diana Prince raises what appears to be a car, revealing – just for a brief second – her armpits.

That brief second was enough to trigger feminists, who quickly lashed out at Warner Brothers for daring to allow Wonder Woman to parade around with shaven armpits. (Milo)

If you’re laughing or rolling your eyes at such a story, good. That suggest you’re at least a little bit normal. Yet for the raving lunatics on the regressive left, having an attractive woman that takes care of her appearance—in a movie—is tantamount to oppression.

I mean, sure, if you are a stickler for regional accuracy, European women from ancient times would most likely not have shaven their pits. But seriously, that’s just gross. Most people are turned off by hairy men. It makes sense that a glamorous female in a Hollywood movie would shave those pits—and those legs for that matter.

If we really want to be accurate, then all those Amazons would have cut off a breast. According to Greek mythology, they did this so it would not interfere with drawing a bow.

Let’s see that in a movie.

Obviously, the people that complained about her pits were not concerned with historical details, but the tired and stupid feminist tendency to attack society’s standards of beauty. Women can be just as beautiful with shaggy pits, dammit! How dare they impose such strict and oppressive standards on women, when just the sight of hairy armpits makes the average person gag?

I’m sure you’re gagging right now just thinking about that.

Yet the irrational logic of modern feminists causes them to revile at such standards of beauty. In their tiny minds, a woman cannot be both strong and beautiful. For them, a real woman must not accentuate their femininity, or appear in any way desirable to the opposite sex. To do that would be to relinquish their independence or power, or some shit like that.

Feminists want the world to be filled with women like this: 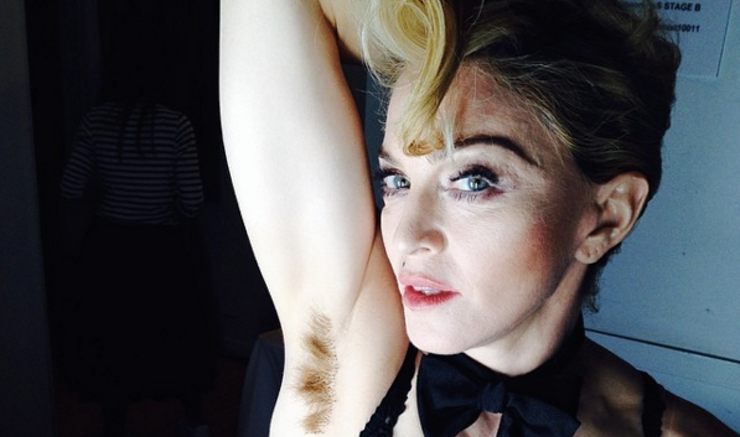 I threw up a little in my mouth.

Then of course, once the movie came out and received critical and box office success, the feminists continued to bitch. Again, along the same tired lines, that a beautiful, strong, white woman could not possibly represent feminism. Because of racism and stuff.

Ms. Magazine has published an article in which the writer appears to take issue with the fact that Wonder Woman is not fat, black or gay in her latest film…

“It does nothing to challenge modern-day racist beauty standards,” she continues…

It’s clear from the irrational crowing of these people, that they will never be happy. It’s not enough that a movie with a strong female lead, directed by a woman, is number one at the box office (for two weeks in a row).

No, the movie is a failure because Diana is not an ugly fat woman. She’s white, so that makes her racist too (and it makes you a racist for enjoying the movie).

Recent studies show that you cannot be fat and fit. Body positivity is a con movement, meant to dupe people into staying in unhealthy, destructive lifestyles. Instead of inspiring people to work out, lose weight, and improve their lives, body positivity hacks want to blame society for “unrealistic” standards of health.

Sure. Why should we have our little girls watch a movie where the woman kicks ass, works out and is healthy? Why shouldn’t we have a few lardos among the Amazons, who sit around eating potato chips and watching TV?

In the minds of feminists, your daughters’ role model should be this lady:

Ah, what every girl dreams of growing up to be!

While the angry feminists attack Wonder Woman for not being progressive enough, of course, there are many who celebrate it as a feminist victory.

In her article ‘Wonder Woman’ wins by being feminist without bashing men, Heather Robinson praises the movie for showcasing a woman working side by side with men.

At New York City theaters this week, many girls and women said they turned out because the character of Wonder Woman has been a personal inspiration in their lives, and they wanted to support the film’s director, Patty Jenkins…

But the film was also striking, some noted, for what was missing: the man-hating grievance politics that sometimes accompanies a projection of female empowerment.

“It’s not a negative film, not against men, but shows women and men working together,” said Elizabeth Liumbruno, 30, an architect from Forest Hills after an evening screening in Union Square. (NY Post)

To be honest, I was fully expecting the movie to take that route. After watching the disaster that was the two mini-seasons of Agent Carter, where the Captain America character existed in a world of only sexist men, I anticipated a similar situation with this movie. Especially since it’s set during the early 1900’s, a time, obviously long before feminism.

Yet, to my utter shock, the film actually showed Diana working successfully alongside several heroic men. They had their flaws, to be sure, but none of them showed pandering sexists attitudes towards the lead. In fact, she falls in love with one of them! That’s sure to raise the cockles of regressive leftist feminists.

And that’s ultimately why they hate this movie. It didn’t take the easy route to attack and vilify men. Such a prime opportunity: the first Wonder Woman movie. The biggest female-led superhero film that will ever be made. And not once, do they take a cheap shot against the men.

Wonder Woman shows that women can both be strong and feminine. They can fight for the people and causes they care about. They can show empathy and compassion, while still kicking ass.

And they can depend on the leadership and guidance of a man, and still retaining their independence and identity.

So, what’s the end result? Is Wonder Woman a sexist piece of trash? Does it ruin decades of progress for women? Or is it, in fact, a feminist manifesto, that undermines men’s roles in our society?

Neither, really. It’s a good movie that, against all odds, showed a strong woman that audiences loved.