A popular movie theater announced a “women only” screening of Wonder Woman and sparked online outrage at their decision. The Alamo Drafthouse announced Wednesday that they would be celebrating girl power by holding a screening of the new female-fronted superhero movie with one rule: “No boys allowed.”

“Apologies, gentlemen, but we’re embracing our girl power and saying ‘No Guys Allowed’ for one special night at the Alamo Ritz,” reads their website, “And when we say ‘People who Identify as Women Only,' we mean it. Everyone working at this screening - venue staff, projectionist, and culinary team - will be female. So lasso your geeky girlfriends together and grab your tickets to this celebration of one of the most enduring and inspiring characters ever created.”

Wonder Woman opens nationwide this week, and the theater chain will be hosting its women-only event the following week; June 4-5 in New York City and June 6 in Austin. The promotion on the Drafthouse’s social media worked, and the screenings sold out in just over two hours. Predictably, critics came out in full force on the internet, crying that the idea was not only discriminatory against men but worked against promoting gender equality. Many flooded the theater’s Facebook page and Twitter account to label the theater sexist and to never support them again. There were many cries of ‘reverse sexism,' ‘misandry,' and promises to boycott the Drafthouse in retaliation.

“Very tacky Alamo,” Facebook user Allan Dale wrote. “I’m all for equality [but] having a screening specifically stating it is not inclusive to everyone, is against equality. I’m not saying Alamo did this intentionally, but it is still just wrong.”

“It’s sexist and bigoted,” Evan Johnson commented--although the over 40 reactions to his comment appear to be laughing at his comment. Many of these drew their own critics mocking the initial outrage.

“Came here to see fragile masculinity and whining, was not disappointed at all,” Isaac Shabaz Boyles wrote. “Hey Alamo, can you do more of these sorts of things? I like laughing at men who are threatened by women getting to have their own lives without constant male presence 24/7.”

The theater itself even responded to some of the outrage, echoing the social media support to defend the gender-specific screening.

“This has zip to do with equality,” Drafthouse said. “This is a celebration of a character that’s meant a great deal to many women since 1940.” They also took to the net to clarify that all guests who identify as women were invited as well. Even better, all proceeds from these screenings will be donated to Planned Parenthood and local women’s shelters.

Alamo Drafthouse, founded in 1997, is well-known for not shying away from provocative marketing and public political stances to embody countercultural spirit. Last year, in the midst of the heated debates regarding transgender people’s use of public bathrooms, the theater's founder, Tim League, announced plans to build gender-neutral restrooms.

“I don’t want to have any ‘men’ or ‘women’ signs in the building,” League said at the time. And when the theater’s 26th location opened in Austin, it included gender-neutral toilets with all-gender urinals included.

I think all of this is hilarious. If you need a good laugh to finish out your week, browse through all the social media posts. Here are some of my favorites: 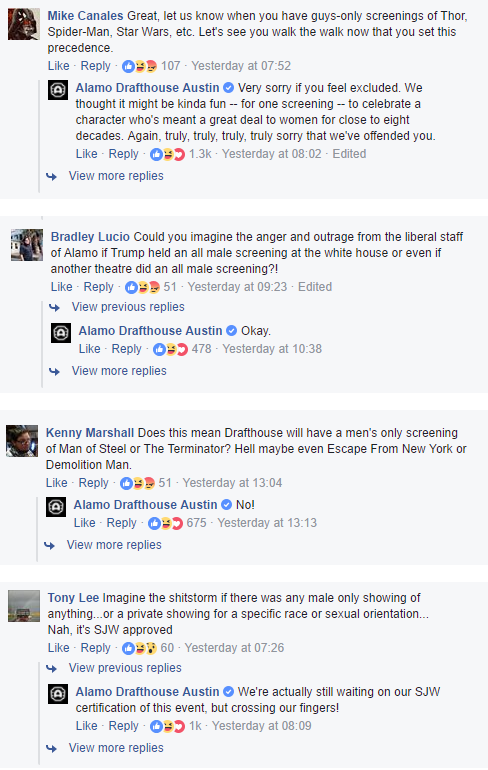 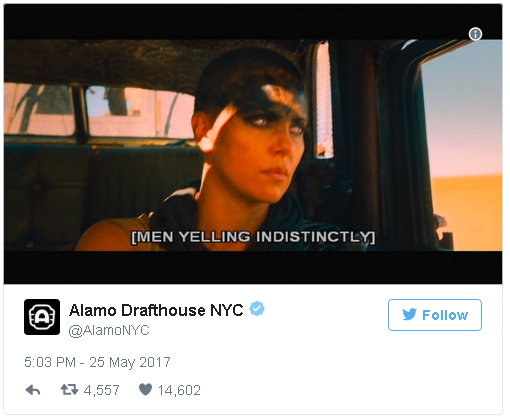 I have to say, whoever is handling the Drafthouse’s social media deserves a raise for handling these complaints like a champ. Not only that, but the theater appears to be doubling down on responded with hilarious trolling.

The theater is not turning all screenings into women-only events, just a few. And it’s not even the premiere or first dozen screenings of the movie itself. Men are obviously welcome to view the movie whenever they wish, especially on opening weekend. Look, Wonder Woman is the first female-led comic book adaptation to hit theaters in over a decade, the first major solo superheroine movie (since Elektra and Catwoman are arguably anti-heroes), Warner Brothers’ first DCEU entry directed by a woman, and the first $100+ million superhero film with a female director. Are women not allowed to have a space to enjoy and celebrate Diana’s first solo film as a shared experience? Oh right, I forgot. The laws of the internet: if women get something cool, some bros have to bitch about it.

Since 1920, there have been around 130 superhero and comic book films with solo protagonists in the US, both on the big and small screens. There are numerous trilogies for some of them, like Blade, Captain America, Thor and Iron Man. The Hulk has had at least three different films (with different actors, it’s hard to say these were a trilogy), and Spider-Man is on his third franchise in a decade with at least one more sequel on its way. Out of all of these, there have been a grand total of eight female leads.

I’m more than happy to celebrate this tidal wave of superhero and comic book films. Starting with Marvel debut of Iron Man in 2008, former nerds are now rocking it out in the mainstream. It’s awesome. But at the same time: there has not been a single comic book movie with a female lead since this trend started. Anyone born after 2005 has never seen a woman star in her own comic book film, but there has been at least 30 superhero and comic book films since 2008 (I’m not including group franchises, like Guardians of Galaxy or X-men, which include women but usually focus male protagonists). In a new era where superhero films are the biggest Hollywood blockbusters across the globe, women are still sitting on the sidelines. Even with Captain Marvel in the works, we’re still at least two years away- she hasn’t even been formally introduced into the Marvel universe yet. It’s awesome to know that there will be Gotham City Sirens movies for Poison Ivy, Harley Quinn and Catwoman next year alongside a live-action Batgirl film from Joss Whedon. But Wonder Woman? This is a history-making moment.

Truthfully, I’ve never been a huge Wonder Woman fan. I never spent hours and weeks of my allowance when I was growing up to buy her stories or merchandise. But seeing Gal Gadot save a man while taking down an army of enemies in the official trailer was rather exciting. It was pretty much the first time I’ve seen a woman not take a backseat to a male character or a romantic love storyline. When I first heard Philip Defranco discussing this story on his channel, I knew the screening was going to get some negative reactions. But my first thought was really about how the Drafthouse was providing a chance for a young woman to go to a theater with her mother, her aunt, her girlfriends, and to watch a beautiful, strong woman on screen kick-ass.

We live in a world where superhero movies are everywhere, but so are the men who lead them. Having a woman stand front and center without apology is rare, and it’s something to embrace. It’s not that men aren’t allowed to celebrate this, or understand and relate to this, it’s just that women finally have a chance to live out some superhero dreams that involve us.

Can you imagine if some of this outrage were directed at real issues of gender inequality? Or even just issues affecting the nation in general, like defunding Planned Parenthood or the new proposed budget that slashes food stamps, children’s health care and clean air and water programs? Oh no, that’s right. A women-only movie screening is the most important inequality issue, because it’s the worst kind of discrimination. 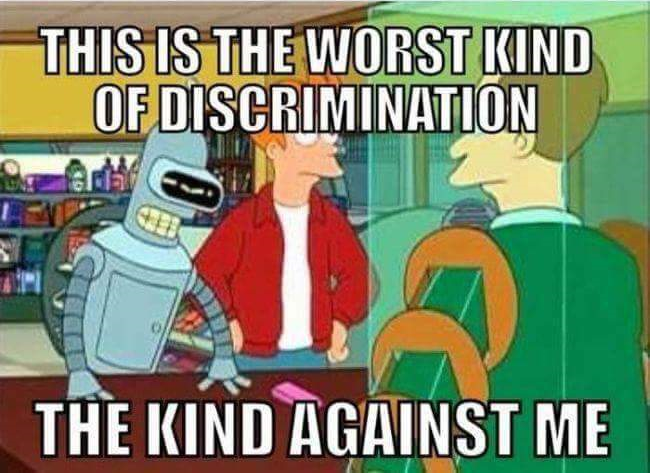