A woman who laughed out loud during one of Jeff Session’s confirmation hearings has been convicted by a Washington jury. Desiree Fairooz, an activist with the left-leaning NGO Code Pink, was found guilty of “disorderly and disruptive conduct” with the intent to disrupt congressional proceedings, as well as “parading, demonstrating or picketing.”

The charges stem from the hearing on Jan 10, when Sessions’ colleague, fellow Alabama Republican Senator Richard Shelby, started discussing Sessions’ “extensive record of treating all Americans equally under the law.” If you weren’t listening closely, you’d have missed Fairooz’s chuckles about 0:45 mark in the video of the hearing. Even those sitting near her during the hearing said her laugh- described more as a cough or gasp by witnesses- was so inaudible they couldn’t tell what it was at first. According to the prosecutor though, Fairooz “grew loud and more disruptive” as an officer attempted to remove her from the room.

“Her disruptive behaviour included yelling that Senator Sessions’ ‘voting record was evil’ and waving a sign that read: ‘Support civil rights, stop Sessions,’” argued the prosecution. It was compelling enough for the jury to convict her in the District of Columbia Superior Court in Washington. So now Virginia native Fairooz, alongside fellow activists Lenny Bianchi and Tighe Barry, are facing up to $2,000 in fines, 12 months in prison, or both. Bianchi and Barry, members of Code Pink as well, dressed up as Ku Klux Klan members to highlight Sessions’ racist history. 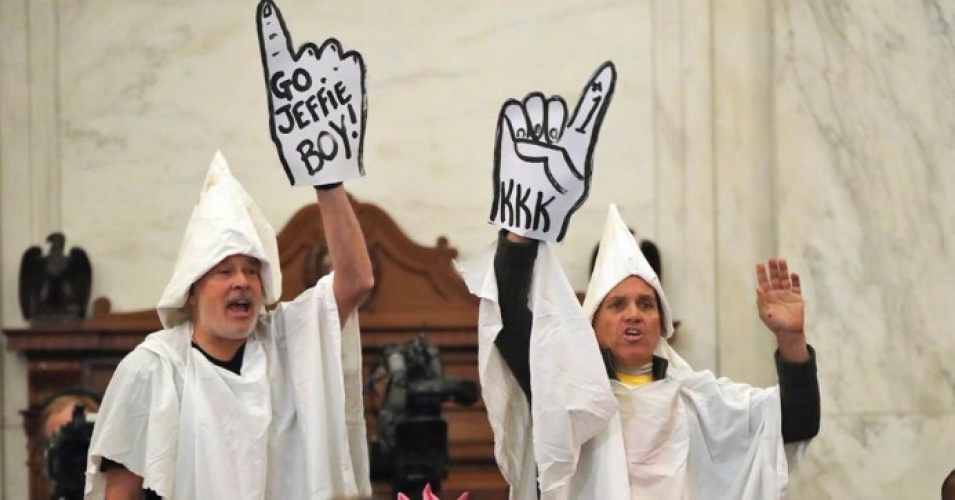 “My performance at the hearing was a parody, but the real joke has become the US Justice Department,” Barry says, “To say that I was appalled that Jeff Sessions was about to become the highest legal authority in our country is an understatement.”

“I felt it was my responsibility as a citizen to dissent at the confirmation hearing of Senator Jeff Sessions, a man who professes anti-immigrant, anti-LGBT policies, who has voted against several civil rights measures and who jokes about the white supremacist terrorist group the KKK,” Fairooz explained in a statement.

Several jurors spoke with HuffPost on the condition of anonymity emphasized that they were focused on Fairooz’s actions after the Capitol Police officer approached Fairooz when she laughed at the claim Sessions had a history of treating Americans equally.

“She did not get convicted for laughing. It was her actions as she was being asked to leave,” the jury foreperson said. The decision of Capitol Police Officer Katherine Coronado was questioned by many jurors, especially given her lack of experience.

“The officer, she was a rookie officer, and I think it was her first time involved in an arrest,” one juror stated. “Make of that what you will.”

“We did not agree that she should have been removed for laughing,” the jury foreperson said as well. Many jurors indicated that they felt they had to convict Fairooz on her arrest behavior because of the way the laws are written though, with one of them describing the language as “so broad.” At least three jurors claimed it was fair to say they felt forced into convicting her. “There’s almost no way you can find them not guilty,” one said.

Justice Department attorneys claimed during the trial that Fairooz’s laughter was enough to merit a criminal charge, asserting that “heads turned around” when Fairooz scoffed. But they mostly focused on how Fairooz acted after she was confronted by the police officers, which left the jury with no choice but to convict.

“There’s not a lot of wiggle room,” the jury foreperson admitted. “Ms. Fairooz’s comments as she was being escorted out cause the session to stop. It disrupted the session.”

They’re lucky all Fairooz did was laugh. Truthfully, much more should have been done to disrupt the hearing because Sessions being confirmed as attorney general is just horrific. I mean, just in the last few weeks alone Sessions has made some pretty disgraceful decisions. April 18, he dismissed the entire state of Hawai’i as “an island in the Pacific” in an effort to discredit a federal judge’s ruling against Trump’s travel ban. On April 21, he sent letters to nine sanctuary cities threatening to cut federal funding unless they complied with his demands. And on April 22, Sessions asserted that the US could pay for the egregious and idiotic border wall to separate Mexico and the US by clawing back over $4 billion in refundable tax credits paid to “mostly Mexicans” without any factual evidence of the recipients’ ethnicity. Not that it would make things better if he did know the ethnicity; it’s still a deplorable thing to do.

Of course, the running theme for this administration is ignoring real facts for alternative truths that serve their purposes.

I don’t begrudge the jury for Fairooz and the other protesters’ convictions. They followed the letter of the law and had to convict based on the language used. What I don’t agree with is the decision to arrest Fairooz in the first place. She laughed. The idea that an American could be removed from a hearing and charged with a crime after laughing is hilarious, given that in Sessions’ response to the Hawai’i gaffe, he lamented: “Nobody has a sense of humor anymore.”

We laugh when things are funny, Sessions. And the fact that your Justice Department is coming after a woman for laughing in the face of political hypocrisy is absolute bullshit.

The idea that Sessions’ history of “treating all Americans equally under the law is clear and well-documented” literally makes me laugh out loud. This is the guy who in 1986 was denied a federal judgeship after he said he was okay with the KKK until he found out they smoked pot. Let’s repeat that again: Sessions’ only problem with the KKK is that they smoked weed. And the fact that, as a senator, Sessions consistently voted against rights for LGBTQ individuals and women is well-documented. His nomination to attorney general and subsequent confirmation was cheered by anti-abortion extremist Troy Newman. As a nation, Americans should be laughing that someone would suggest Sessions is a civil libertarian, out to fight for our freedoms and protect our rights.

Sessions’ Justice Department initiated an arrest for a single woman laughing at Sessions. If that’s not disturbing to you, you’re not paying enough attention. The entire Trump administration seems to think it can end criticism by punishing it away. President Trump’s constant accusations of fake news or any poll numbers demonstrating his unpopularity are just the tip of the iceberg in an administration reliant on alternative facts.

Laughing at someone creates a status shift, a perceived power shift in that moment of comedic release. If you believe you’re an imposter, the loss or shift of power can start a panic, because you’re never quite sure that you can regain that power since you’re not actually qualified to hold it. I mean, the FCC is investigating Stephen Colbert for a presidential dick joke for God’s sake. I don't know how else to describe the beginnings of totalitarianism any more accurately.

Did Fairooz’s chortle sexually assault someone? Did her chuckle have suspicious connections to Russia that affect democratic elections? No. A woman quietly laughed at an ironic situation with a politician, and it was perceived as so dangerous and disruptive that she was arrested. Maybe there’s a new superhero power about to be discovered.

To be fair, laughter can be a powerful thing. Laughter is the best medicine, and with that healthcare bill Republicans are pushing through, we’re going to need all the free meds we can get. Unfortunately, it looks like a couple of belly guffaws can now land you in jail too. Fairooz laughed for all of us who are watching incompetence and ridiculousness take center stage in this new administration.

But right now, it’s either laugh or cry from the hopelessness of watching a single administration undo years of progress, freedom and civil rights. Hopefully, while we’re laughing, the Trump administration will learn to laugh at itself too. Otherwise they may very well destroy the world in a war to protect fragile egos.