'Woke' Professor Goes Off The Deep End About White Families

Remember, once upon a time, when we were told it’s not the color of your skin that matters, but who you are as a person? I seem to recall someone specifically saying:

I have a dream that my four little children will one day live in a nation where they will not be judged by the color of their skin but by the content of their character.

Who said that again? Oh, what does it matter? Because today those words seem to be quaint nonsense, a pithy platitude for a bygone era.

You see, when Dr. King spoke those words—he was very deliberate. He didn’t say “I don’t want my children being judged for being black.” He said he didn’t want them to be judged by “the color of their skin.” He chose those words very wisely. Why? Because he understood that racism can be used against anyone.

Perhaps he foresaw a time in America where, while black Americans are protected by Civil Rights laws, a movement would emerge that attacked other people. It’s generally agreed in our country that mistreating or discriminating against someone because they are of African descent is wrong. There are a litany of laws that protect people of color from violence, discrimination in the workplace, and other forms of hate.

But there is a sentiment, one that has been growing for a long time, that white people are the root of America’s problems. That if you have white skin, you are automatically the enemy of people of color. Today it goes even further than that. If you are a straight white Christian person, congratulations: you’re the scum of the earth!

Now, you might be wondering why sexuality, gender, and religion got thrown into a discussion about race. It’s because the ones creating these arguments aren’t really interested in race or ending any form of racism. They are interested in identity politics. A tactic, largely embraced by liberals, that has pitted minority groups against the majority of Americans. Simply as a means of manipulating these minorities for votes and support (and all too often, cash).

Since most Americans (statistically speaking), are white, straight and some form of Christian, anyone that doesn’t fall into one of those categories is prime for pandering to.

This is why you see liberals grouping together gays, black people, and Muslims, even when many of these people have little in common. Large portions of black Americans are Christians; they don’t believe in Allah, nor do they endorse homosexuality. Gays and Muslims… yeah, they don’t get along either.

But none of them are white, straight Christians, so liberals group them all together as demographics they can exploit.

It’s gotten so bad that in some pockets of our society people are calling for the end of the “white race,” whatever that is.

There are even professors who have made vilifying white Americans a focal point of their careers. Being white and having white families is somehow an affront to their goals of a diverse and racist-free America. To them, just having pale skin is a crime.

If you’re “reproducing white children” you’re “part of the problem,” so says critical social psychology professor Jessie Daniels of the Graduate Center at the City University of New York and Hunter College.

The “White Lies” author said last week on Twitter: “I mean, if you’re a white person who says they’re engaged in dismantling white supremacy, but + you’re forming a white family + reproducing white children that ‘you want the best for’ – how is that helping + not part of the problem?” (Via Infowars) 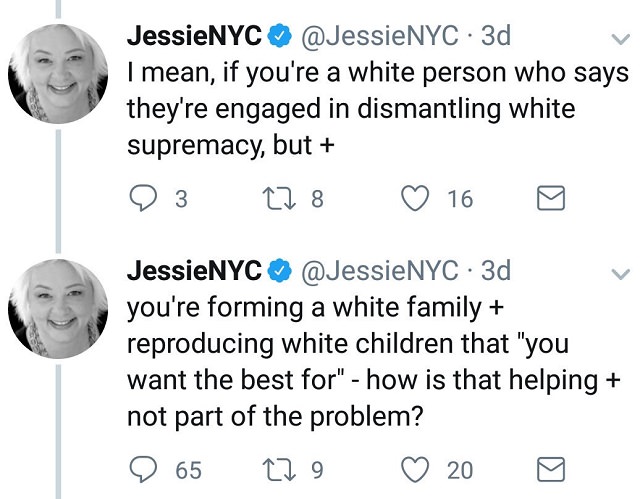 I know we say this a lot (because it happens a lot), but imagine if this idiot said this about any other race! She would be cast out of civilized society. She would be stripped of her job at the City University of New York. All of her friends would (rightfully) want nothing to do with her. Her social media accounts would be locked. She might even get sued by a few people for hate crimes.

Yet it’s okay that she says this about white people? Are we the universe’s punching bags—the ultimate scapegoat for all of the world’s ills—so that this is acceptable? 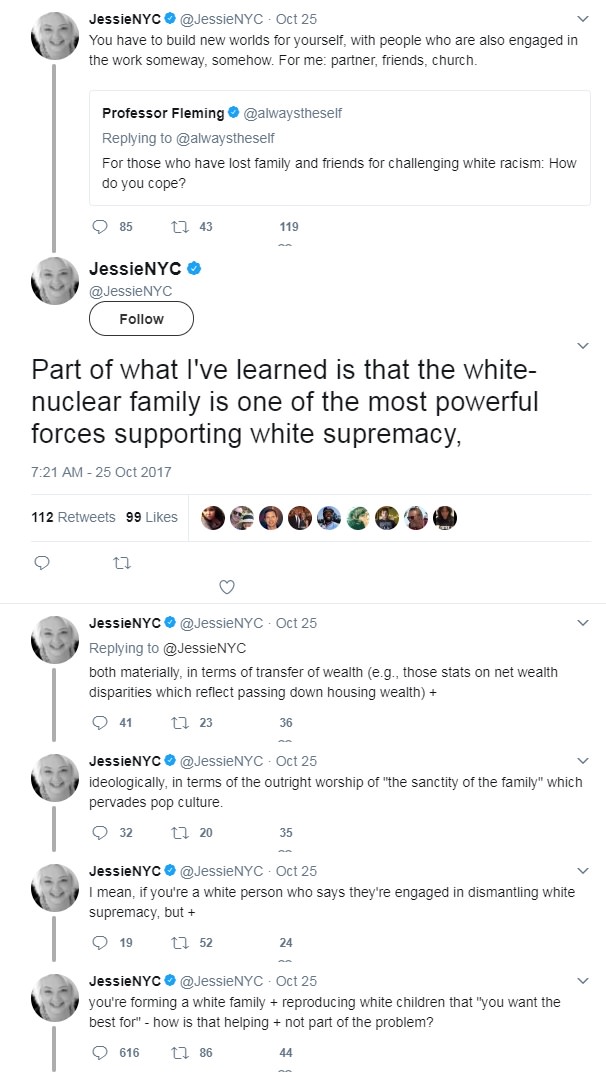 This kind of rhetoric was in fact used in the past to demonize other races. Once upon a time, there was institutionalized racism, in America and around the world. There were actual organizations that spread nonsense to justify things like the slavery of black people. Later on, they spread similar propaganda to justify the sterilization and extermination of non-whites.

Just look up the history of Eugenics, Margaret Sanger, and Planned Parenthood.

In the past, racists wanted to discourage black people and other non-whites from having children. They even compelled many of them to sterilize themselves. We look back on that era with horror. It was a criminal and evil attempt at wiping out an entire race of people.

Yet a college professor, in 2017, can say the same thing about white people?

If you’re a white person with “multiracial children,” you’re still could be part of the problem, Daniels said in a follow-up tweet: “[I]f you’re white + forming a family w/ multiracial children +not dealing w/ your own racism or systemic white supremacy, how’s that helping?” (Via Infowars)

Really Daniels? You’re saying all white people are racist and supremacists? Despite how much a white person can prove themselves honest, decent, and respectful of all people. Despite the good white people have done to end racism in the United States. Despite the kindness that all Americans show to one another—regardless of race. This professor still asserts that—because of their skin color—all white people are evil.

How is that not the same kind of racism that sought to destroy black people in the past?

You might be surprised to see that she is, in fact, white herself. That’s nothing new. White liberals love to show off how “woke” they are, by trashing their own race. They try to shed off their white guilt by attacking other white people. “Hey, I’m not racist! I’ll prove it by insulting everyone white that isn’t me!” It’s a pathetic ploy that screams of desperation and hypocrisy. 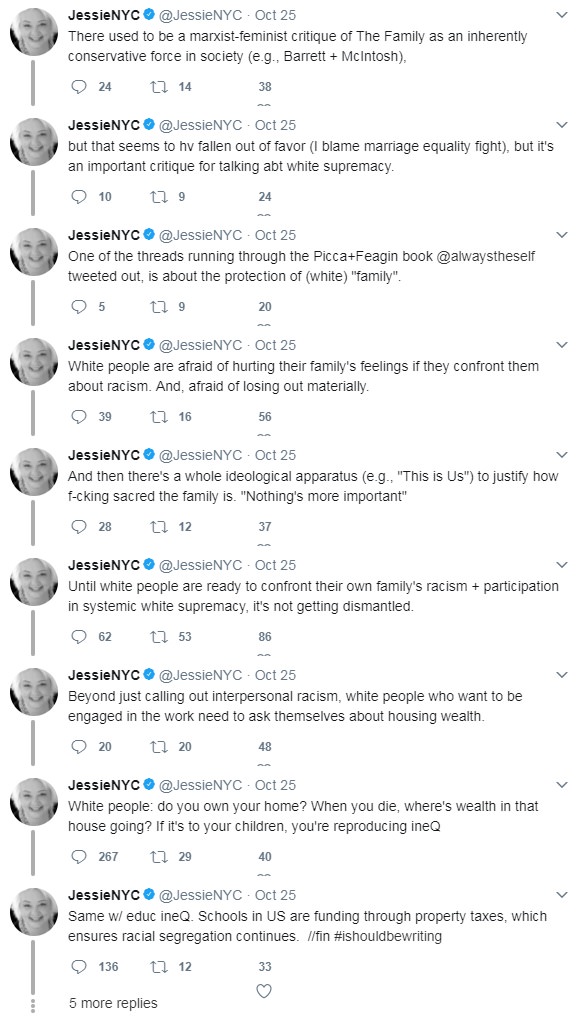 Her Twitter rant against white people, nuclear families, and family values goes on for quite a while. I hate to think about what her classes are like. I can’t imagine any white student sitting through this kind of idiocy. Actually, scratch that. I’m sure only white students take her class. People of color don’t carry this kind of hate in their hearts. Only fellow white liberals would sit through hours of this garbage.

As you can imagine, Daniels locked her account after receiving criticism about her tweets. I’m not surprised. Now if only the City University would get this idiot off their payroll.