This Is Why Modern Protests Don't Work

I maintain that the individual has the potential for greatness. A person has the ability to take ownership of his or her life.  They can commit themselves to growing, learning, achieving things they never thought possible.  This is because they have within themselves the ability to think independently, question everything, take a stand for their beliefs, and grow mentally, emotionally, and spiritually.

People, on the other hand, are very different. People can be easily manipulated. People can be corralled, bullied, oppressed, and whipped into a frenzy. People, much like herds of cattle and lemmings, all too often succumb to the loudest voice, the strongest fear, or the most powerful impulse. They act irrationally, lash out in violence, and cause utter destruction in a blink of an eye.

We've come up with words to describe this phenomenon. It's called the mob mentality, when otherwise normal, decent people forgo their intelligence, reason, and common sense and give into the worst kind of behavior, simply because everyone else around them is doing it (or they perceive everyone else is doing it).

That's one of the reasons why I've never gotten into a mosh pit. It's also the reason protests are pointless.

The first amendment to the Constitution provides Americans with freedom of speech, religion, press and the right to peaceably assemble. That is what we commonly call protesting, a large or small gathering of people, with a common goal.

Protesting or peaceful gatherings/marches/assemblies are often used to raise awareness of an important issue- like the annual March for Life in Washington.  They can be used as a way for a group of people to build solidarity, or to announce to the world that they are taking a stand against a particular issue.

But are they really effective?

In recent years we've seen many highly-visible protests in America and in other parts of the world.  There seemed to be a rise in them during the Obama years. How ironic is that? We had a very liberal president, yet radical, progressive liberal groups still felt the need to protest, often with violent results.

But what is a protest supposed to accomplish, in practical terms? You can have all the fun you want getting into a big group, shouting, getting lots of attention, but when the dust settles, something of value should have come out of it, right? Otherwise, you were just part of a less-fun concert- minus the music.

The real power of the protest is its ability to sway our leaders. When an elected official sees a great number of people gathering for a specific purpose, they might be more motivated to listen to them and perhaps set policy to accommodate. If not, well maybe these people won't vote for them come the next election.

Writing letters and making phone calls to your senator is fine, but there's nothing like a big ol' group of people on his doorstep.

It's a kind of sophisticated form of extortion, or put another way, bullying. We can't really trust our officials, after all. They are supposed to represent us; sometimes they don't. So protesting can send a powerful signal to our leaders that we are watching them, and they better listen.

Using that criteria, we can judge some recent protests and try to decide if they really accomplished anything.

Immediately following the election, and I mean immediately, MoveOn.org organized protests in outrage over the victory of Donald Trump. MoveOn is very good at organizing protests; that's all they do. You'll find that in many of the "organic" demonstrations we've seen in recent months, it's really been these professional protestors at work.

What was the goal of these protests? Were they petitioning the government? If so, for what? Did they expect their protests to nullify the results of the election? Did they believe then-President Obama had the power to wave his hand and give Hillary the victory?

Where were all these people on November 8th, by the way? Over 100 million people voted in the election, after all; should their voices be voided because a few thousand got together to protest?

The post-election protests had no real goal; they had no power to reverse the results of the election. It was a lot of noise; great photo ops for the press and clips for the nightly news, but no teeth to change anything.

What about the #DisruptJ20 protests? Michael Moore and his band of anarchists were poised to disrupt the peaceful transition of power from the Obama administration to Trump, through organized demonstrations around Washington, D.C. But instead, over 200 people were arrested for rioting, and the Inauguration went on unhindered. In fact, it was a smash hit. Just look at how many people showed up (thanks, CNN).

What did Moore's people accomplish, besides destroying a Muslim immigrant's limo? Did they think the government would cancel the event, or prevent Trump from taking office?

Did they think our society was so loopy that Trump would back down and Obama stay in office indefinitely?

Then there was the Women's March on Washington. Millions of women- spread out across the country and the world- gathered to say they thought Trump was a big meany. And to wear vaginas on their head. To what end?  Were they petitioning for a specific purpose?  Did they want a law passed to help women? Did they raise awareness for the many women in other countries getting raped, killed, or persecuted? Not from what I saw.

In fact, the Women's March was so disorganized and goalless that conservative pundit and comedian Steven Crowder was able to disguise himself as a tranny and infiltrate the event. He learned that if you're a man and dress up like a women, the mindless cucks on the left will let you do anything, go anywhere, and say whatever you want.

When he asked very pointed questions about the event's goals, these geniuses had nothing of substance to offer. Even Wendy Davis, the leader of the event, could only provide a generally sexist plan based on the stereotype that women waste a lot of money shopping.

The idea of gathering together is fine; I wouldn't deny anyone their Constitutional rights. But we are seeing a sad and pathetic pattern on the left. They don't get their way, so they protest, often at the expense of their neighbor's safety. It's the grown up equivalent of a temper tantrum. Babies don't get their way when they cry and scream; apparently these adults never learned that.

But there is a goal being accomplished through these protests, a far more nefarious one than they realize.

First, let's round out our list with this weekend’s utterly pointless protesting in U.S. airports over Trump's temporary ban on immigrants from seven countries. This is particularly stupid, because it endangers the most critical parts of our nation's security: airports. You'd think these people could have found better places to stir up trouble, like a Starbucks or bus station bathroom.

These protests are pointless, simply on merit alone. They are based on outright lies and open ignorance of the facts. Facts like that the countries chosen were based on Obama's findings and that Obama himself banned immigrants during his presidency; for longer than Trump's intended ban.

What is the goal of these #NoBanNoWall protests? To overturn the executive order? Protesters don't have the power to do that. Not even Congress does, given that the power was granted to the President by laws passed by Congress. Chucky Schumer promises to pass new laws, except that he has to get through a GOP majority in Congress and a President that will veto his bill.

So what's the point? These protests are means to give dark, evil groups power over large swaths of the public. They prove the left is being manipulated by their emotions- pawns used by CAIR, MoveOn, and other groups who would like to reinvent the United States, strip us of our freedoms, and dominate the public.

Tell me if this sounds familiar:

A hideous ecstasy of fear and vindictiveness, a desire to kill, to torture, to smash faces in with a sledge-hammer, seemed to flow through the whole group of people like an electric current, turning one even against one’s will into a grimacing, screaming lunatic. 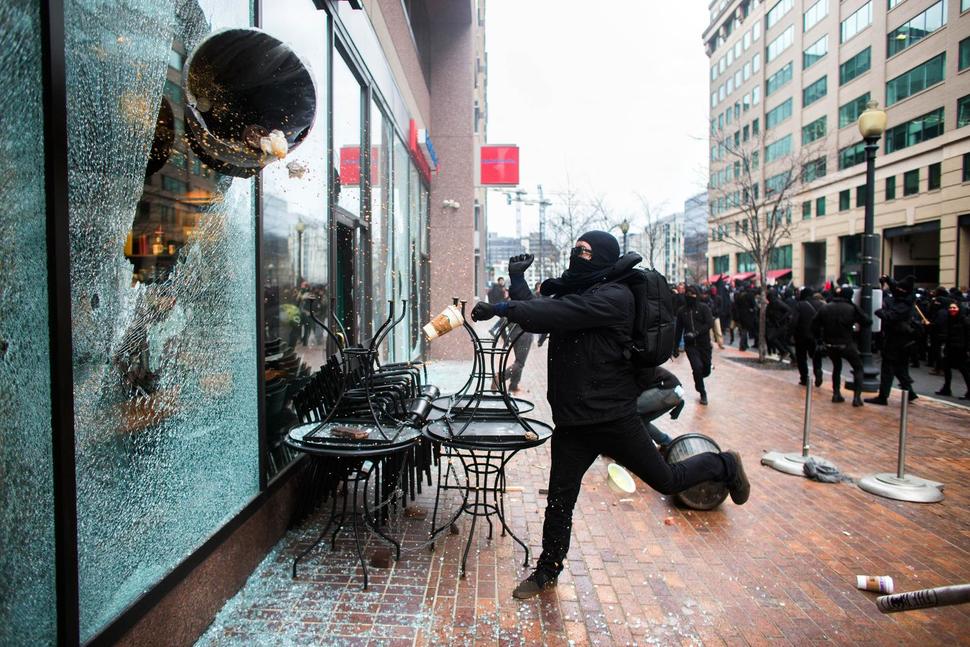 We've seen a lot of this during these "protests" these past months. You might be surprised to know that this is taken from George Orwell's 1984, and describes the people who were controlled by Big Brother. People who had given up freedom of speech, press, and thought.  People who were easily cowed by an all-power authority.

In my last post discussing Soros', some people liked to point out that the right has their own "boogey men." While there are rich elites who like to influence Republicans, we do not see the kind of emotional witchcraft that happens so regularly on the left. We don't see Republicans, conservatives, or libertarians rioting, blocking traffic, burning cars, or inciting violence against their neighbors.

We certainly don't see them constantly calling for the assassination of the POTUS.

But when do protests really work? When their goals are noble and are led by people of wisdom.

Remember 1963's March on Washington? The famous gathering of 300,000 Americans who were protesting an end to racial discrimination? It was the event where Dr. Martin Luther King gave his historic I Have A Dream speech. Why was that protest so effective?

You see, someone who is gainfully employed has power. Not just because of money, but because of that fact that they have ownership of their lives. Someone who works can afford a home, has money in their pocket, can buy whatever they want, pays taxes, contributes to their society, improves the world around them, can grow by learning skills and education, and ultimately can express themselves (freedom of speech), reach others (freedom of press), and glorify their creator (freedom of religion).

The greatest threat to tyrants and dictators are people like this.

Someone in poverty can only do few of these things. In fact, they are often beholden to other forces to survive. The March of Washington had a deliberate goal and, coupled with many years of work and petitioning the government, was able to see multiple Civil Rights laws get passed.

Modern liberal-driven protests have no such clear goals, as was the case with Occupy Wall Street and all the protests I've listed. They are means for many well-meaning, but stupid, liberals to be co-opted by politicians, global powers, and other nefarious forces to accomplish very un-American goals. The mainstream media spreads false information, political activist groups send out some tweets, and you have thousands of cucks screaming and endangering themselves and others.

Where is the intelligence? Where are the facts?  Where are the clear goals that can be accomplished when everyone works together? They don't exist.

Instead, there is anger, there is hate, there is fear generated by lies and deceit. All to produce a lot of noise, violence, and unrest that will ultimately lead to a totalitarian environment where nobody is free.