Why Did FBI Officials Detain An Activist Tied To Abolish ICE Protests?

On August 3, following Immigration and Customs Enforcement’s recent arrest of Sergio “Mapache” Salazar — an 18-year-old anti-ICE protestor and DACA recipient without a prior criminal record — the FBI reportedly interrogated Salazar hoping to secure details about other illegal immigrants and activists in the San Antonio, Texas area, according to a new report from The Intercept.

“I was taken aside to a little room by the FBI,” Salazar said in the recording, provided to journalist Cora Currier by lawyers at RAICES Texas, an advocacy organization focused on immigrant rights. “They wanted to ask me about all my friends. Their words were that I am someone who has a lot to say, and they’d like to hear it. But they also were implying that if I got them useful information, about something I’m about to be a part of, that, the fact that it was useful would get to an immigration judge.”

He declined their offer.

Salazar, an aspiring filmmaker raised in Texas since the age of two, remains held in Webb County Jail in Laredo, Texas following his activist group’s non-violent encampment protests in July. “It seems evident that he was targeted here because of his involvement in the anti-ICE protests,” Jonathan Ryan, Salazar’s lawyer from RAICES, recently told The Intercept. “We’re very concerned about how directed and targeted and aggressive and quick this was,” citing this as proof the FBI have a new-found interest in the members and operations of the Abolish ICE movement. 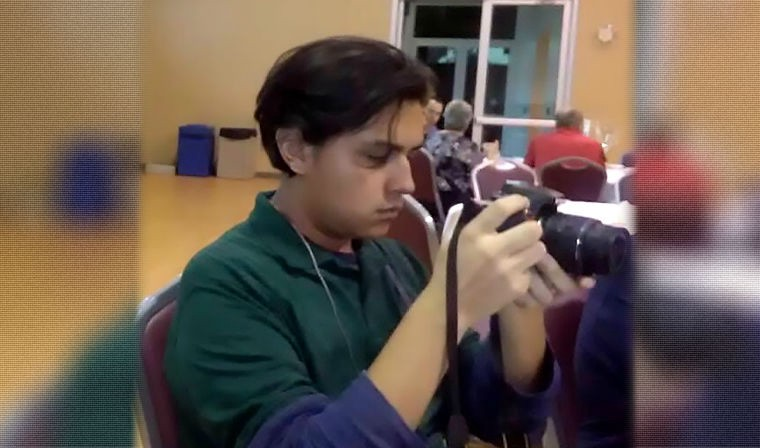 Currier and The Intercept haven’t released the audio publicly for verification.

The FBI/ICE also provided no evidence to suggest the boy is some criminal threat, however you wouldn’t think this was the case considering his treatment from their agents. According to Salazar’s claims, following the encampment protest, he was taken in the back of the agency’s van, stripped of his belongings and shackled upon their arrival at a local abandoned Walmart. It’s unclear how a warrant was granted for Salazar’s detainment, though this isn’t surprising given investigation into ICE operations show the agency can grant these warrants internally, without much governmental oversight, all the while ICE handbooks provide legal methods to avoid the fourth amendment’s protection from illegal search and seizure.

In any case, the boy was initially sent on his merry way to the South Texas Detention Complex, a privately owned facility from the rather controversial GEO Group, who now allow ICE their space to contain soon-to-be-deported suspects. Salazar’s refusal resulted in his transfer to Webb County. While he was previously protected under the Obama-era Deferred Action for Childhood Arrivals (DACA), Salazar’s latest application was denied for being what FBI interrogators were quick to label a “bad person.”

The FBI released the following statement:

“It is our policy to neither confirm nor deny the existence of an investigation. To protect the privacy of individuals we may be investigating, and the integrity of our investigations, we also do not comment on specific investigative techniques.

The FBI investigates activity which may constitute a federal crime or pose a threat to national security. Our focus is not on membership in particular groups but on criminal activity. The FBI cannot initiate an investigation based solely on an individual’s race, ethnicity, national origin, religion, or the exercise of First Amendment rights, and we remain committed to protecting everyone’s rights.

The FBI is not the lead federal law enforcement agency tasked with enforcing immigration or border security. Absent a criminal or national security threat, our mission priorities do not include immigration enforcement.”

Jennifer Falcon, the communications director for RAICES, told the far-left outlet Mic.com that their allegations against her client were about potential “bomb-making” against pro-ICE activists. This is a serious charge, and yet no evidence was provided by the government proving her client or “Occupy ICE” had intentions of producing explosives, let alone any experience in this field. Regardless, anonymous officials within the FBI told The San Antonio Express that Salazar’s name is now, suddenly, on an FBI database of potential threats. Salazar believes this was because of his group's online postings and chants, which was confirmed by local law enforcement in the same article.

“They’ve not made any bombs,” Falcon cried. “Sergio says he’s never mentioned a bomb or done anything of that nature, so he doesn’t understand how they could get a search warrant to go through his phone. He wasn’t even aware that his DACA was denied,” she continued. “It was very obvious that they arrested him the day of. He was clearly targeted, and it’s just unbelievable.”

This targeting may not just be a hyperbolic defense. During their conversation with Salazar’s father, he confirmed his neighbor noticed a strange car outside of their house three weeks prior. “She went up to them to ask what they were doing. And they lowered the glass and she saw that they had the initials FBI on their shirts,” the father alleges. “It was really strange, we’ve never had problems with the law, we don’t get involved in anything.”

Well, outside of immigration laws, that is.

This is the absolute state of modern politics. While the popularity of ICE has decreased over time, in the wake of numerous scandals of families sometimes being permanently separated at the U.S.-Mexico border, there’s still a debate as to how the immigration agenda should be set going forward. What should be unacceptable, regardless of ideology, is whether the government agencies have a role in overseeing these agendas for shady reasons. As said by William Perdue, a lawyer with Arnold & Porter focusing on lawsuits on immigration and free speech, the public should demand more transparent knowledge into how these investigations were determined:

“It’s really very simple,” Perdue told the publication. “The government can’t just retaliate against someone for criticizing the government, and that includes immigration officials. They’re not allowed to take enforcement action against activists because of their activism.”