Why Did Democrats Reject The GOP's Latest Offer On DACA?

In the wake of the newly published omnibus spending bill, which would fund the government until September to the tune of $1.3 trillion, Democrats and President Trump have already made a deal — once again abandoning funding for the Mexican-American border wall and leaving 1.8 million undocumented immigrants, brought into the country illegally as children, without any concrete protections.

No one in governmental power has managed to successfully read the bloody 2,232 page budget, despite being passed by Congress and signed by President Trump, but leave it to House Minority Leader Nancy Pelosi (D-CA) and Senate Minority Leader Chuck Schumer (D-NY) to praise it as some form of economic victory in spite of their dreamer problem.

“Democrats fought with great integrity, strength and unity to secure vital middle class priorities in the omnibus spending bill… while successfully removing many dangerous ‘poison pills’. Thanks to the leadership of Democrats, the omnibus proposal contains bold investments in our veterans, the NIH, community health centers, and families fighting opioid addiction. These job-creating, life-saving investments stand in sharp contrast to the Trump Budget.

Democrats also won explicit language restricting border construction to the same see-through fencing that was already authorized under current law. The bill does not allow any increase in deportation officers or detention beds. We are disappointed that we did not reach agreement on Dreamer protections that were worthy of these patriotic young people. We will continue to ask the Speaker to give us a vote to protect Dreamers and honor our values.”

Who is to blame for this political non-agreement, you may ask? If you speak to the dealmaker-in-chief, Trump and GOP members are pointing their fingers squarely at the Democratic Party — and they’re not exactly wrong to do so.

It was Rep. Pelosi who admitted to obstructing border protections the GOP wanted tied to constitutionally sound, legislative protections for dreamers.

It was Rep. Pelosi who praised the removal of these “poison pills”, referring to the staunch demands of both political parties, while in the same breath condemning the removal of supposedly poisoned dreamer protections as some form of disappointment.

This rhetoric is in line with similar reports published last week from The Hill. They noted the implemented strategy of House Minority Whip Steny Hoyer (D-MD), a man who also said that “poison pills” such as DACA provisions were to be avoided come negotiation time — citing they wanted to avoid another government shutdown that could be turned back on their party.

Democrats, of course, are denying they’ve abandoned dreamers — and at least in rhetoric, that’s somewhat true. Rep. Pelosi may be able to stand for 8 hours crying woes of the dreamers right to live in America, but where is that in the negotiation room? According to President Trump’s taunts, both in speeches at CPAC and ritualized late-night tweet storms, Dems are “nowhere to be found”:

The Democrats do not want to help DACA. Would be so easy to make a deal!

Democrats refused to take care of DACA. Would have been so easy, but they just didn’t care. I had to fight for Military and start of Wall.

This GOP narrative was highlighted by CNN host Jake Tapper who spoke with an unspecified source shortly after the meeting. The source claims it was Sen. Schumer’s formal rejection of last-minute offers made by the House Majority Leader Paul Ryan (R-WI) that lead to DACA’s legislative stagnation.

They go on to allege Rep. Ryan proposed “dreamers” under the DACA program would be given up to three-years of amnesty. This temporary compromise, however, would come at an understandable price.

Tapper reports this would be tied to funding for Trump’s $25 billion border wall (an offer which amounts to peanuts among the elephant party’s already overblown budget), so as not to repeat the same immigration failures.

Tapper, who released this information in full on Twitter, said: 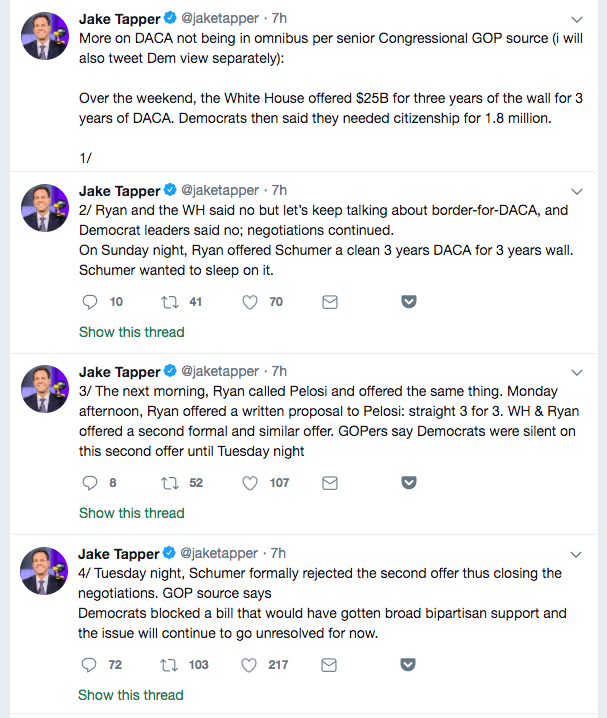 Similar narratives regarding this negotiation were drafted by the Democrats through Schumer’s press secretary Matt House, placing more of the blame on the GOP despite admitting DACA protections up to three years were offered. 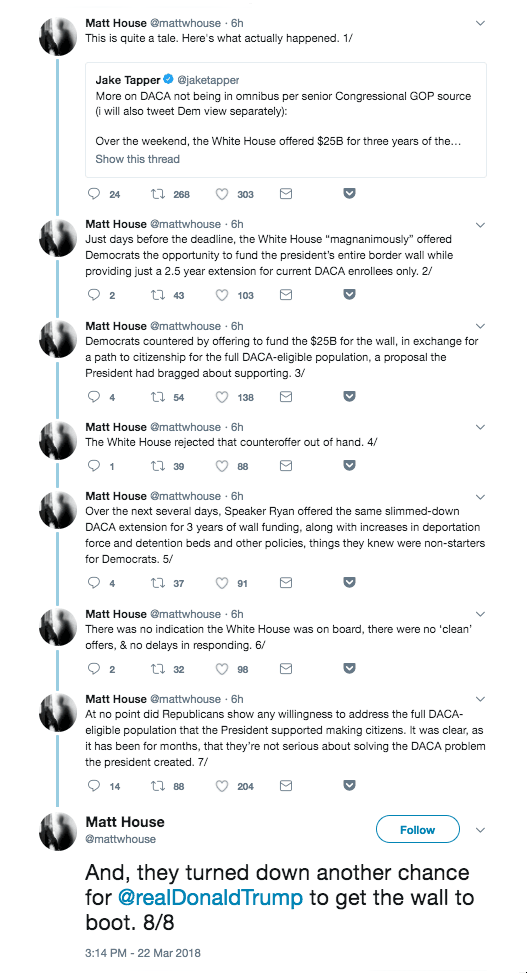 Regardless of this partisan game of “no, they actually started it”, illegal immigrant rights advocates are furious with what they view to be a political game of 4-D chess — believing the stagnation comes as a result of Democrats trying to win back government come the 2018 mid-terms through the coerced votes of anxious immigrants and allies.

This is the observation of the director for the Center for Immigration Studies, Mark Krikorian, who told Breitbart shortly after the budget was proposed:

“[In 2019] they could get green cards for them in exchange for nothing at all … or for much less than full funding for the wall. The Democrats have used the ‘dreamers’ as political p.r. for more than 15 years — why should they stop now?”

And he’s not wrong.

Why would they stop receiving guaranteed votes in their corner?

As Sen. Dick Durbin of Illinois told Bloomberg News, it was “President Trump [who] created this crisis” in the first place. Trump did so citing unconstitutional concerns with how former President Barack Obama used an executive order to ensure these protections, not Congress who are meant to be writing the laws. Their original devil may say he’s their new champion, but it’s highly doubtful immigrants and allies will turn to the party of Ann Coulter, the former Trump devotee who would surely deport them all if given legislative power.

This has given Democrats the chance to rally minority votes through little action and big power politics, crossing their fingers to win votes in the next election without any real merit to their name, sure to run campaigns on the anxiety of the voting population they helped foster.

Paul Quinonez, an illegal immigrant formerly under DACA, now residing in Washington state, spoke with Al Jazeera regarding his dissatisfaction with both the president and the party he believes played him for a fool:

“Democrats sold out our community by backing down from the demand to include a fix. If Trump truly cared about a solution, he would push for a permanent solution and wouldn’t have killed all bipartisan proposals. We won’t accept a temporary patch that harms all other immigrants.”

Sure, the left-wing negotiations started off overly ambitious. Both Sen. Chuck Grassley (D-IA) and Sen. Dick Durbin (D-IL) introduced their version of a “clean” DACA bill, offering a few immigration reforms while making absolutely no Republican concessions regarding border security (making it a non-starter in a GOP controlled government). This was soon rejected in December last year, which may give them #Resistance credibility but a lack of governing results.

Months later, towards the middle of February, Democrats rejected possibly the best deal for immigration activists and their party: full citizenship to at least 1.8 million DACA illegals in exchange for Republican concessions in an end to chain-migration protections (despite this evidently being a GOP myth, as TrigTent has previously reported), an end to the diversity visa lottery program, aforementioned funding for the border wall and the introduction of a points-based skilled-immigration system echoed in other industrialized nations such as Canada and Australia.

Did Democrats stick to protecting dreamers? No. This, evidently, was also rejected because walls are racist and peace of mind for illegals brought in as children undermines the new electoral narrative — which is what their actions seem to indicate.

Democrats’ blue wave isn’t riding on pro-DACA bravery. Principled politicians would seek a policy victory anywhere they could get it, ensuring dreamers don’t face the unconstitutional seizures of ICE officers. Instead, the blue wave may be masked with anti-wall faux-heroism and ensuring this bill passes at any costs so the right donors and politicians, like the military industry who Trump highlight as key beneficiaries of this “disastrous” bill, get their revolving door paycheques safely in the mail.

Dreamers should learn the difference between these narratives.

Or they could be the next to be deported— it certainly remains to be seen what Democrats will do to stop it..