Why Are California's Priorities So Messed Up?

Three months ago the country watched as the poorly maintained Oroville dam threatened to collapse, forcing the evacuation of many terrified California citizens. After a period of drought, the rains came causing a surge of water that the aging dam could not hold back.

The poor condition of the dam only highlighted the major problems the state of California has been facing with its infrastructure. One of the largest states in the country, with arguably the highest taxes, cost of living, and wealth, doesn't seem to be able to maintain the most basic needs of its society.

But why? Shouldn't a largely liberal state like California have enough cash and cache with their people to fund large projects like rebuilding and maintaining its infrastructure? Apparently not. Because, although the job of leaders is to keep their society humming, the extreme leftism of California's social justice lawmakers have caused them to entirely ignore these basic needs.

Which begs the question: is California simply the worst?

For over a decade, despite many warnings, the social justice warriors have not only refused to build new water infrastructure to feed a population growing with the immigrants and now refugees they want to protect, they have also refused to spend money to protect the infrastructure they have. (Forbes)

According to reports, California has over $77 billion in deferred road, highway, and bridge maintenance. The state suffers from numerous sinkholes, highway collapses, and other damage caused by the sudden influx of rain. 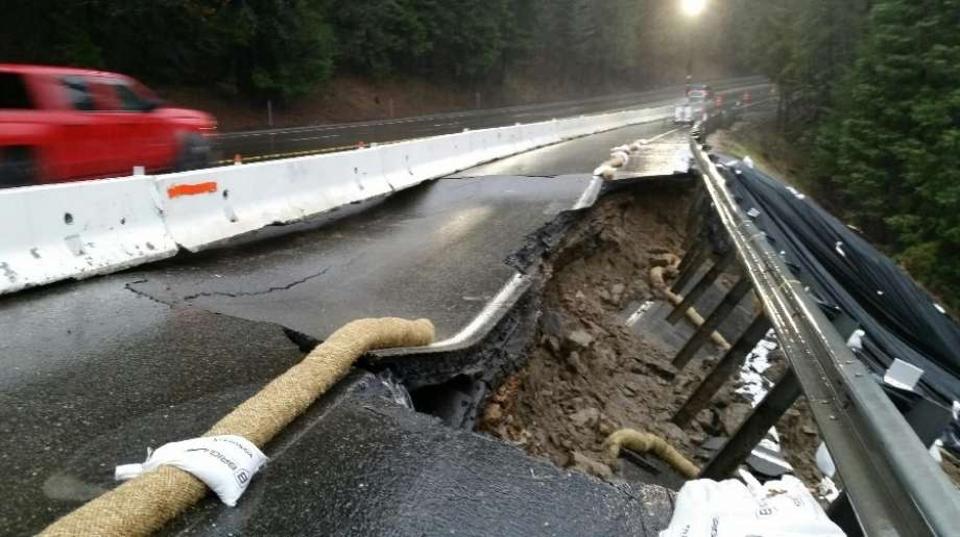 It seems with or without rain the state is unprepared for what Mother Nature might through at them. No rain? Awesome, the state doesn't have any kind of infrastructure to provide needed water for its millions of citizens and their agricultural industries (those Napa Valley grapes don't water themselves).

Even a basic desalinization project, taking water from that big thing nearby called the Pacific Ocean, would have helped. But no, California lawmakers were happy to have people and companies suffer.

But when the rains came in force? I have good news for you! The state's infrastructure is so poorly maintained, that the rains destroyed roads, bridges, and a 50-year-old dam that has been ignored!

That alone should make conscientious citizens consider a move. But there are even more problems in the works.

It seems that the lawmakers of California, helmed by idiot Jerry Brown, have their priorities completely out of focus. When faced with real challenges, like water shortages and crumbling infrastructure, the liberals in power double down on the social justice agenda.

So, what is an impoverished California to do?  It’s not an academic question.  California leads the nation in poverty when cost of living is factored into the equation.

According to Brown and the Democrats, the answer is: fight for future immigrants, refugees, sanctuary cities, social issues and global warming. Social justice for all – in other words – served on high speed rail.

That high-speed rail is a $70 billion dollar project that critics say will only benefit the construction union.

But the problems with the state go far beyond bad construction decisions. Even before Trump took office, California lawmakers were virtue signaling up the ass. They made it clear their priority was not the prosperity and success of their citizens, but to resist the incoming Republican president.

State lawmakers clashed in rancorous debate Monday over how to respond to President-elect Donald Trump, with the majority party Democrats introducing a barrage of legislation challenging his key proposals...

Gaveling in a new two-year session, lawmakers announced bills that would provide attorneys to immigrants in the country illegally, refuse assistance to any proposed registry of Muslim immigrants and require any wall built along the Mexican border to first be approved by California voters. (LA Times)

Sure spend money and time passing laws that protect illegal's. Forget about the welfare of your tax-paying citizens. You know, the people that start businesses, create jobs, and contribute to the overall growth of your state.

You gotta protect all those criminal aliens first, right?

Here is some more evidence that California cares more about empty headed liberalism than helping its people.

Democrats cheered when the state raised the minimum wage to $15.00 an hour. They championed this shocking spike in pay because, according to their logic, big companies like Wal-Mart and McDonald's could afford a relatively modest, mandatory increase in salaries.

But big companies are big for a reason: they know how to save money. And while California lawmakers pretended this was a victory for the working class, it was a big f**k you to every small business in the state.

You see, small businesses are always struggling to survive. In an age of massive conglomerates and Amazon.com's, smaller companies have to make sacrifices to succeed. Sometimes that means paying staff less than they deserve.

The upside, of course, is when the company grows, the pay goes up. But not if the government gets involved, artificially inflating salaries.

So what can a company do? Either they lay off staff, go out of business, or leave the state.

Houman Salem, founder and CEO of Argyle Haus garment factory, has penned an op-ed in the Los Angeles Times explaining that the city’s new $15 minimum hourly wage, which was followed by a similar statewide rule, is forcing him to leave California...

When the $15 minimum wage is fully phased in, my company would be losing in excess of $200,000 a year (and far more if my workforce grows as anticipated). That may be a drop in the bucket for large corporations, but a small business cannot absorb such losses. I could try to charge more to offset that cost, but my customers —the companies that are looking for someone to produce their clothing line — wouldn’t pay it. The result would be layoffs. (Breitbart)

Uh, duh! It seems the liberal lawmakers who passed this bill were too busy patting themselves on the back to actually look at the economics of such a law.

This kind of policy has damaged the food sector, with a shocking 4,000 restaurant jobs lost in San Diego since their minimum wage hike.

So small and large businesses are hurt. Salaried employees, working class folk, and wealthy business owners are hurt. Just who is getting helped by California's liberal policies?

Oh, that's right, all the illegals!

Californian Governor Jerry Brown has unveiled revisions for his January budget proposal, which reportedly includes millions of dollars in criminal defense fees for aliens facing deportation from the U.S...

Under “Immigration Services,” Brown has proposed an increase of $15 million to $30 million “to further expand the availability of legal services for people seeking, “…deportation defense.” (Milo)

As citizens flee the rushing floods of collapsing dams, suffering business closures and layoffs thanks to wage hikes, and drive their cars on broken roads and bridges, the governor is spending millions to protect criminals.

Brown claimed, "We will defend everybody — every man, woman and child — who has come here for a better life and has contributed to the well-being of our state." But only if you came from Mexico.

So if you're a lawful citizen in California, you suffer with no one to help you. But if you came to America illegally, abused our school and health systems, never paid taxes, you can count on Jerry Brown to fight the federal government for you.

Am I taking crazy pills? No, Brown is.

Want more salt in the wound? A new law is going to increase the cost of gas for everyone by a shocking amount.

The law, passed April 6, imposes a 12 cents a gallon hike on citizens and raises the tax on diesel fuel by 20 cents a gallon. It also implements an additional charge to annual vehicle license fees ranging from $25 to $175 depending on the car’s value. (Daily Caller)

I mean, come on California! Do you want anybody to be happy? Why should citizens live in a state that neglects its infrastructure, protects illegal aliens, and punishes people for using gasoline?

The tax is another obvious liberal deterrent. You see, if you own a hybrid or alternative-fuel car, you wouldn't have to pay this higher tax. But if you hate the environment and drive a fossil-fuel burning car (or if you just can't afford a hybrid), you are forced to pay higher gas prices.

California lawmakers can't force hybrids and alternative fuel cars to be viable. So instead they just punish everyone for driving gas-burning cars. Forget the fact that most citizens have to drive a car to get to work, or to take care of their families, or carry out day-to-day errands. The people are the enemy. They must be taxed into oblivion. At least that's what they seem to think.

Of course, that hike in license fees punishes people successful enough to afford a nicer car. Do you drive a junker? Good, you get to pay less. Did you work hard, get a good job, and are able to get a loan to buy a new car? Screw you, you pay more.

It's almost like they want people to drive older, crappier vehicles.

It's clear that the pervading policy of liberal California lawmakers is to oppose the rising trend of conservativism in America. Sure, they were bad under Obama, but the victory of Trump, the GOP, and growing conservative groups has forced them over the edge. They are no longer interested in the well-being of their people, but in upholding failed social justice policies that have no justification in logic or reality.

What can honest, decent citizens- be they Democrat or Republican- do at this point? You can't blame the federal government when your state leaders are making these choices. You can't blame small businesses for laying off workers or moving to another state because they can't afford to survive. You can't blame Tesla for your increase in gas prices.

In the end, you can only blame your leaders. Oh and yourself, since you voted them in.

Everyone else? I hear Oregon is lovely.