White Professor Flips out Over Kids in a Restaurant. Because They're White

Sometimes the stories just write themselves. In the latest bizarre antics of white liberalism, a college professor lashed out because his Harlem restaurant was being infiltrated by kids. White kids.

Okay, let’s be honest. The issue of race is a quagmire. It’s hard for well-meaning people to discuss it without falling into a pit of misunderstandings, accusations, and bitterness. Race relations have been a struggle in America since the very beginning. In all truth, they’ve been a challenge for all of human history.

Point to one country that’s never had a big problem with race. I’ll show you a few more fantasy lands. The fact is, people struggle with understanding others from different cultures, races, and backgrounds. It’s not like we don’t try. I’d wager most people in American want to get along with their neighbors, be they white or black. The problems come when we have to deal with pieces of garbage like the man mentioned in this story.

It’s true white Americans have a bad track record. In the past, many white people were bigoted towards blacks. And Asians. And Indians. And… you get the idea. But much has changed over several generations. Most white Americans look down on racism with the incredible disgust. They can’t believe past generations treated people of color so poorly.

The fact is, things are getting better. They’re not perfect, but they’re a damn sight better than the era of the Jim Crow South. I think we can all agree on that. But white liberals take race relations to a whole new, weird place.

How else can you explain the strange case of Mr. James Livingston?

A white professor at Rutgers University is being investigated by the school for a Facebook post captured by The Daily Caller that railed against white children eating in a Harlem restaurant while he was there.

“OK, officially, I now hate white people,” history professor James Livingston wrote in the post removed by Facebook for violating community standards. “I am a white people, for God’s sake, but can we keep them—us—us out of my neighborhood?”

Livingston complained about going to Harlem Shake, a restaurant known for its burgers and shakes, saying it was “overrun with little Caucasian a—holes who know their parents will approve of anything they do.” (Fox News)

I’m not really sure how to break this story down. Why was a white guy upset that white kids were eating at the restaurant? I mean, sure, some white people can be bigots. But clearly not these kids. They were in Harlem, after all. The restaurant, Harlem Shake, caters to everyone—black and white alike. On what grounds did Livingston judge these children?

Oh, no real grounds at all. He was just making assumptions about them because of the color of their skin. Hmm, isn’t there a word for that?

If this is shocking to you, don’t be fooled. Liberal college professors seem to subscribe to a particularly virulent form of leftist ideology. To them, white people are some kind of sickness. No matter what we do, we will always be racist and bigoted in their minds. Our “white privilege” means we cannot treat others equally, nor do we deserve the same respect shown to minorities.

After all, if you’re the majority race, that automatically makes you a bad guy.

You might think that kind of ideology would be embraced by only the most radical black activists. But because it’s so common in colleges, more than a few white people have adopted it.

Livingston ended his tirade by writing, “I hereby resign from my race. F--- these people. Yeah, I know, it’s about access to my dinner. F--- you, too.”

It’s hard to wrap your head around why a person would believe this. The only logical conclusion is that people like Livingston are trying to earn some kind of “progressive cred.” If they bash their own race enough, they can be accepted by others. Why not? All white people are terrible, aren’t they? If Livingston shows utter contempt for them—then he’s sure to be accepted by people of color.

You also have to wonder about the inherent racism he expresses towards black people. This professor was upset that white people were in this Harlem restaurant. That implies he thinks only black people should be eating there. Separate eating establishments for whites and blacks? Livingston is endorsing segregation when he goes on these rants.

He thinks there are places only black people should eat. Does it work the other way around? Should black people avoid certain places—places only reserved for whites? When you push this idea from one end, you inevitably support the other.

Segregation has become a popular thing on college campuses. Some black groups want rooms to discuss racial issues—but expressly forbid white people from attending. Harvard allowed a “blacks only” graduation ceremony. They think they are being sensitive to people of color (who apparently hate whites so much they need “safe spaces”). All they are doing are disgracing the sacrifices and hard work their parents made to end segregation in America. 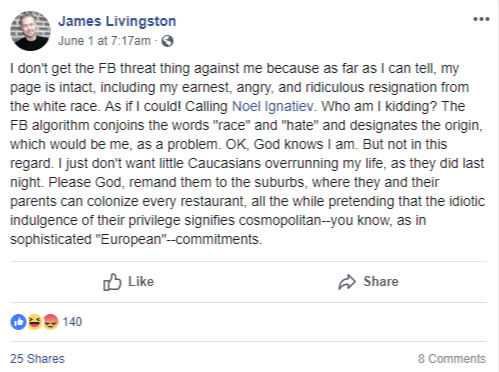 This is a man parents pay to teach their children. Not great, Rutgers. I’d like to see how many alumni want to fork over cash after this episode.

“I just don't want little Caucasians overrunning my life, as they did last night,” he wrote. “Please God, remand them to the suburbs, where they and their parents can colonize every restaurant, all the while pretending that the idiotic indulgence of their privilege signifies cosmopolitan--you know, as in sophisticated ‘European’--commitments.” (Fox News)

What an asshole. This so-called educated professor uses pseudo-intellectual terms to insult white people. All the while pushing an ignorant stereotype. Oh, all white people grow up in the suburbs? That’s a gross generalization. I guess there are no white people in major cities, living alongside people of color.

The very owners of Harlem Shake disprove Livingston’s narrow, bigoted view. Reality: Americans of all colors and backgrounds live and work together. Despite their differences, they try very hard to get along. Many of them do, no problem. They might have different views and disagree from time to time, but they should be given credit for undoing centuries of hate, fear, and mistrust.

Livingston is a cancer. He would, with his hate, undo all the good we are trying to achieve in our country. His hatred is worse than anything liberals accuse conservatives of. The real danger? Hate like his continues to thrive, supported by the media and politicians who want to get ahead.