What Is Happening To The American Press?

Or dying. Or in decline. Whatever terminology works for you. Basically, I’m saying the mainstream media, the American press as we know it, is a rotting, desiccated corpse that is limping along, falling head-long into its inevitable grave.

Now, I’m obviously biased, for many reasons. I am literally working for the competition. As a writer for new media, I represent the massive movement that is rapidly usurping the traditional media’s place. Plus, I’m an unapologetic conservative that is disgusted by the mainstream media’s wildly liberal bias.

So, I can understand that perhaps you, gentle reader, might not entirely trust my assessment of the media’s decline. My ongoing rants and discussions over how dishonest, corrupt, and generally untrustworthy the media has become might not be entirely convincing, should you be a bit skeptical of my motives.

I get that. That’s why I’m including evidence.

So here is some of the most recent evidence to support my claim that the mainstream media is a pathetic, dying beast. And that they’ve done it to themselves.

Here is a first-hand account from writer Nick Bilton when he worked at the New York Times:

[I}n the early 2000s..the newspaper’s Web site was treated like a vagrant, banished to a separate building blocks away from the paper’s newsroom on West 43rd Street. Up-and-coming blogs—Gizmodo, Instapundit, and Daily Kos, which were setting the stage for bigger and more advanced entities, such as Business Insider and BuzzFeed—were simultaneously springing up across the country. Yet they were largely ignored by the Times as well as by editors and publishers at other news outlets. More often than not, tech-related advances—including e-readers and free online blogging platforms, such as WordPress and Tumblr—were laughed at as drivel by the entire industry, just as Napster had been years earlier. (Vanity Fair)

Traditional media’s shocking lack of foresight has led to their massive decline in recent years. They did not acknowledge the importance of emerging platforms like the Internet, and later e-readers, despite up-and-coming contributors telling them to do so. So now they are falling behind websites like Buzzfeed, which made its name with cat memes and listicles. This has made them desperate. Desperate to claw back some kind of relevancy and audience. Desperate for attention.

The election of Donald Trump was a massive shock to the established media. It was chilling proof of what we all knew for years: that the mainstream media no longer has the power over the populace they once had. Donald Trump danced around the media, reaching people through social media, and turning the establishment’s hate into loyalty from voters.

Now the media wants blood. They don’t even care how empty or dishonest their coverage is. The concepts of journalistic integrity or ethics don’t even factor into the equation.

I don’t like the mainstream media, but even I’m shocked at how little they care about the facts anymore.

NBC News has been forced to correct an “EXCLUSIVE” tweet claiming that Russian President Vladimir Putin “does not deny having compromising information” on U.S. President Donald Trump…

The outlet apparently thought it’d be a good idea… to claim it suggests he may have information that could compromise President Trump – a claim leftist conspiracy theorists have long been harping about.

Unfortunately for NBC, Putin actually does deny having any such information – a fact the outlet was forced to point out in a subsequent tweet correcting the first. (Milo) 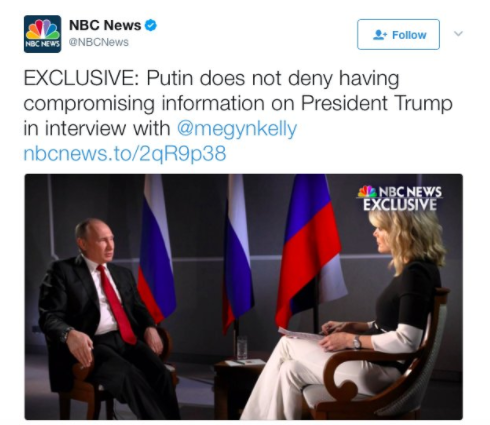 Here we have a major news outlet, blatantly stating the opposite of what happened, of what Putin said. You might consider it just a mistake, but the fact that they Tweeted it as a headline story suggests otherwise.

They were hoping that the obviously dishonest tweet would get a lot of traction, through retweets and reposts online. Then they could post a retraction later, which would obviously get less attention. This is a tactic that’s becoming very popular these days. The liberal media is hoping the knee-jerk, viral nature of the Internet will help them spread disinformation rapidly, far too rapidly for corrections or facts to matter.

Who cares if their intent is to openly deceive millions of people? As long as the idiotic public believes it!

Spreading disinformation to attack an enemy has been used for decades among warring nations. The fact that the press is using to attack their own president is alarming, unprofessional, unethical, and downright treasonous.

You might think I’m making more of this than I should. That, sure, sometimes even good journalists can make mistakes. That outlets like Twitter make it worse because of how mistakes get broadcast again and again, and it’s so hard to correct them.

Perhaps. But how do you explain this development: the New York Times firing their public editor?

The New York times is reportedly eliminating the position of public editor – a move that is bound to raise eyebrows given the public editor’s role in holding the media giant accountable to its readers.

According to HuffPost, the role of public editor was first introduced at The New York Times in 2003 following a plagiarism and fabrication scandal involving reporter Jayson Blair…

As HuffPost points out, Spayd’s tenure as public editor was fraught with tension provoked by her relentless willingness to call The New York Times out on its rubbish. (Milo)

The public editor was the last shred of accountability the Times had. Once upon a time, newspapers actually cared about publishing the truth. If a paper was found to be pushing false information or lies, it could hurt their reputation. So, a public editor was an important role in keeping them honest.

That doesn’t matter anymore, because the Times has made it their goal to attack President Trump at any opportunity. Facts be damned. Truth be damned.

The most recent public editor, Elizabeth Spayd, seemed to be pretty honest. She had what we used to call, integrity.

“My job is not to win any popularity contests,” she said. “It’s not to put my finger up and gauge the direction of the wind and move toward that. My job is to do what I think, based on my many years of experience, is the right thing to do.”

Boy is she in the wrong line of work! Doesn’t she know that that last place to report the facts is the media? The media is all about following liberal trends, jumping on the bandwagon, and pushing their narrative, no matter what the cost.

I can’t imagine how hard it was for Spayd to do her job, considering the kind of nonsense the Times has been publishing in recent months.

I mean, this woman actually defended Trump voters, claiming they weren’t racists! We can’t have that kind of honesty at the New York Times!

The firing and elimination of their public editor are proof that the once greatest news outlet in America is nothing more than a pathetic, biased, liberal-pushing piece of trash. They don’t care about covering the facts, or being honest about our government or leadership. They are still butthurt over the election and will do everything to discredit Trump. That includes blatantly lying.

Of course, we are seeing individual “news” people showing their bias online. Reza Aslan, the CNN reporter who ate human brains, had no problem calling the President of the United States a “piece of shit.”

CNN’s Reza Aslan is not happy with how U.S. President Donald Trump responded to news of Saturday’s terror attacks in London.

“This piece of shit is not just an embarrassment to America and a stain on the presidency,” declared Aslan in an angry tweet referencing Trump’s call for his travel ban to be reinstated following Saturday’s events in London. (Milo)

Whoa! Tell us how you really feel, Reza! Just look at what at the tweet he was commenting on. Trump was calling for vigilance in light of yet another terrorist attack. In the last two months, England was attacked by terrorists three times. That kind of thing was once considered unthinkable. Now it’s happening almost every day.

The president has every right to demand action so more people won’t die. Yet this cannibal has the gall to curse him out in public, when Trump was right?

Liberals were quick to question Trump when news of the latest attack in London hit. NBC refused to acknowledge the president’s assertions that it was in fact a terrorist attack. Even though it resembled the exact same thing that happened in London on March 22.

They are so stupid, they seem to want radical Islamic terrorists to kill more people. Their bias against the president is causing the media to betray any last shred of ethics they once had.

I can cite more examples, but I think that’s enough for now. The end result of the mainstream media’s bias and inability to adapt to a changing world has caused it to become a bloated, irrelevant, pathetic corpse. A dying institution that is trying to drag down Western civilization with it.

It’s high time we let go and let it die.