If I could choose the pettiest thing I would change about the 2016 election, it would be the tendency of candidates and their supporters to use “wealth” and “income” interchangeably in public discourse. Competing proposals from 2020 candidates and other representatives demonstrate some of the problems that arise when we don’t have a general agreement on how we talk about the money of the very wealthy. This muddying of terminology and basic assumptions has muted an important difference between wealth and income taxes: only one of them involves cash flow. And if that seems inconsequential, that’s a problem.

In her argument for the wealth tax, Elizabeth Warren has made the case that the extremely wealthy have the means to pay high taxes for the greater public’s benefit. And this is true in the grand sense. But when we get into specifics, the idea shows a potential domino effect that she must address in her proposal. This stems from the asset classes that comprise the net worth of the wealthy.

In 2016, nearly 100% of all American families had assets, with a median value of about $100 thousand. Even among the lowest income earners, 97.5 percent had some type of asset. But this chart using Federal Reserve Bank data shows why our reference points for wealth are useless when discussing individuals with high net worth. 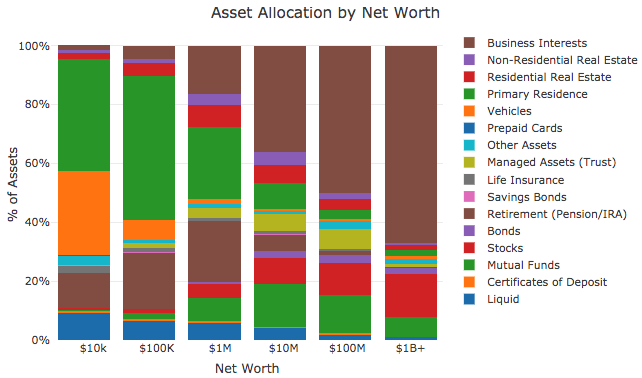 Let’s take an example of a household hit by Elizabeth Warren’s wealth tax. This is a family with $100 million in assets; the tax is on assets over $50 million, so $50 million is taxable under Warren’s scheme. I ran my own quick analysis of Federal Reserve data (I looked at households with $50m-$100 million. A “one percenter” is one of the 1.2 million households with net worth $10 million and above. A 0.1 percenter is worth over $43 million, so we’ll assume around 120,000 households will be hit with the tax.) on Berkeley’s website and the typical family in this range of wealth has an average of around 5 percent in liquid assets, so we’ll assume they have around $5 million in cash and $95 million in other holdings like stocks, mutual funds, and business interests. Not bad! According to the same survey, roughly 60 percent of assets for families with this amount of wealth is in non-financial assets.

Warren has a proposed 2 percent tax on assets over $50 million and below $1 billion. Each year, then, this family has to pay $1 million in cash for the wealth tax, in addition to income taxes paid. And let’s run through income: let’s say this family earned the average for each “type” of income in a typical year. They earned about $2 million from the businesses they own, $2 million in interest and dividends, $2 million from salaries, and $2 million from capital gains. All told, they brought in a little over $8 million. That’s a good year! We’ll say they kept about $5 million after paying income taxes (I’m assuming federal, state, and local taxes amount to 40 percent for the sake of simplicity. In the event of a democratic victory top tax rates will almost certainly increase but for the moment let’s assume they don’t.), comfortably enough to pay Elizabeth Warren’s wealth tax and have plenty of cash left over for other expenses, including debt repayment.

But let’s say they didn’t have a good year. Say they had a really, really bad year, as these things go for millionaires. The head of household lost his job halfway through the year and didn’t receive a bonus, so had a salary of $600 thousand. Their investments performed poorly and they only received interest on the $5 million in cash, for $150 thousand. It was a tough year for their family business and they brought in a fourth of what they expected, at $500 thousand. And they waited to sell some major assets as prices had dipped substantially. They brought in $1.25 million, or say $750 thousand after income taxes. They have a mean debt of about $1.5 million, so we’ll assume about $200 thousand goes to debt repayment. They use cash reserves to pay their remaining expenses, and they sell $500,000 in stock to pay the wealth tax.

As $700,000 is more than most of us make in 10 years, it’s hard to feel too much pity here. But in aggregate we’re not talking about one super rich family being unprepared for catastrophe, and this is where our understanding of wealth and income breaks down. If a bunch of millionaires have a significant downturn in their income, it does not spell good things for the economy — and not in a “rising tide lifts all boats” way; in a “the economy is already collapsing and it’s finally hitting those at the surface” way. One super rich family selling off its stock and real estate one year has no noticeable impact on the economy. But we’re talking about roughly 120 thousand super rich families who, together, own a huge share of not only the stock market but also a huge number of businesses, between them, all suddenly having a shortage of cash.

Elizabeth Warren offers a five-year deferment on payment of the tax for what she calls the “rare” taxpayer facing “exceptional circumstances” with high net worth but liquidity constraints. But as we’ve seen, this is not a rare individual, at least not in a period of wide economic distress. Warren is making a troubling assumption about the liquidity of assets that she doesn’t fully explain. On her website, she gives an example of a hedge fund manager with a net worth of $500 million. This is a person whose household, on average, makes $17 million a year, or say $10 million after taxes. His liability, listed on Warren’s website, is $9 million for the wealth tax. Again, a million dollars of inflow and an enormous net worth as a cushion (including about $5 million in liquid assets) is nothing to sneeze at. But this is a person with a highly volatile income and few liquid assets, and I highly doubt the public would tolerate “exceptional circumstances” for a bad few years in hedge fund managing.

These are families with enormous amounts of wealth, who indisputably have the means to pay such a tax. But the tax has a markedly different effect in times of a strong economy and times of a weak economy, which Warren has yet to address. Also troubling, Warren has yet to define what “exceptional circumstances” means, and who will be allowed to defer. She leaves that up to the IRS to suss out. Will there be mass deferral or forgiveness in lean years, or will we tolerate a mini-crash every April as a hundred thousand families sell off shares? And if these families CAN defer, what happens at the end of the fifth year of a bad recession as a hundred thousand families simultaneously sell off enough shares to cover five years of a huge tax debt, plus (as yet undefined) interest?

I’m describing a doomsday scenario, but in the past few decades we’ve lived through several. Concurrently, we’ve diminished our existing strategies for taxing the super rich. The top marginal income tax rate has fallen from 90 percent in the 1950s to 37 percent today (with a brief dip to 28 percent under Reagan). The capital gains tax has been cut multiple times, and our policy allows for an enormous amount of gain to be forgiven if it’s inherited (the very issue Warren’s tax seeks to address). We even allow people to avoid multi-million dollar tax bills by loaning their art to museums. And the charitable giving deduction, largely exempt from public scrutiny due to the altruistic nature of a typical gift, can be a morass of tax avoidance when employed by the very wealthy. All this is to say nothing of the thousands of households with net worth between $20 million and $50 million, who would be unaffected by this wealth tax but still, according to the rhetoric, are not paying their fair share.

This cash flow problem could be solved, at least for a time, by expecting super wealthy families to keep a higher portion of their wealth in cash. But this is truly a fundamental shift in our approach to both household finances and personal investment, potentially with major long-term economic implications. The government could also, as two economists suggest, accept shares of privately held companies in lieu of a cash payment and auction them off to individuals seeking ownership of private firms. This, too, would completely change the way we think about taxation.

Warren’s proposal is fundamentally, transformatively distinct from every other taxation proposal, and lumping them all together as a “tax on the one percent” does a disservice to both the proposal and its shortcomings. This is not just a new tax. This is a significant change in the way households interact with the economy. This needs to be a critical part of the conversation on the wealth tax, and it requires a deep analysis before that conversation can continue.