The Trump administration doesn’t shy away from its strong stance on protecting the border. It was a key issue that led his supporters to chants of “build the wall,” ICE’s crackdowns on undocumented migrant workers and recent policy which previously saw families separated upon entry. Defenders of the president often justify these policies with an argument that ‘it’s just happening to illegals,’ therefore law-abiding citizens need not be afraid of their big, bad government. But is this still the case?

According to a report from The Washington Post, published last Wednesday by journalist Kevin Sieff, a frightening new policy has reportedly seen “hundreds, even thousands” of Latinos being refused passports despite their legal U.S. citizenship status.

The Washington Post cited several examples, including a 40-year-old named Juan who says he was born in the United States, was delivered by a midwife in southern Texas and served in the Army, the Border Patrol and the state prison system. “I served my country. I fought for my country,” the man told the newspaper.

Juan is joined by an increasingly large number of Latinos who were delivered by midwives near the southern border, some of whom were accused of issuing fraudulent birth certificates to babies actually born in Mexico. Though between 1960 and 2008, there were only 75 midwives convicted of fraudulent activities in the South Texas area, because these midwives also legally delivered thousands of babies during the same period it has proven nearly impossible to distinguish between illegitimate and legitimate documents. It also doesn’t help that most of these cases are decades old. According to Vox and the Brownsville Herald:

“As he would later learn, Juan is one of a growing number of people whose official birth records show they were born in the United States but who are now being denied passports — their citizenship suddenly thrown into question. The Trump administration is accusing hundreds, and possibly thousands, of Hispanics along the border of using fraudulent birth certificates since they were babies, and it is undertaking a widespread crackdown …

In some cases, passport applicants with official U.S. birth certificates are being jailed in immigration detention centers and entered into deportation proceedings. In others, they are stuck in Mexico, their passports suddenly revoked when they tried to reenter the United States. As the Trump administration attempts to reduce both legal and illegal immigration, the government’s treatment of passport applicants in South Texas shows how U.S. citizens are increasingly being swept up by immigration enforcement agencies.”

Snopes found that when subjects such as Juan sought representation with immigration attorneys, their law sources claim there’s an “obvious upswing” in these passport cases they’re undertaking during the Trump administration.

The State Department, however, don’t want to own this apparent build-up, drafting graphs to compare the current situation to passport revocations under President Obama. 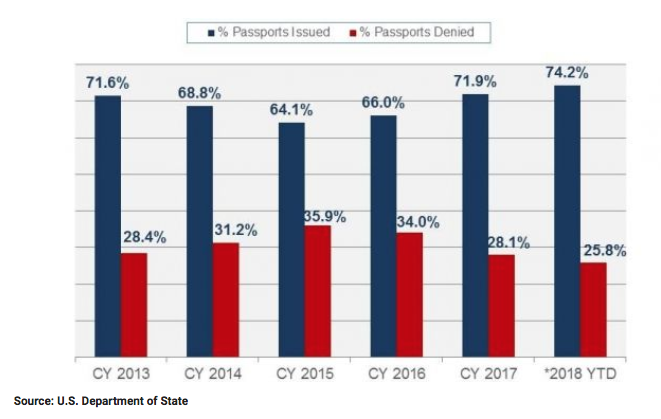 Since the government is the subject of this scrutiny, we can’t just take their graph of improved passport processing at face value. Neither can we outright trust the word of State Department spokesperson Heather Nauert who said:

“The facts don’t back up the Washington Post’s reporting. This is an irresponsible attempt to create division and stoke fear among American citizens while attempting to inflame tensions over immigration. Under the Trump Administration, domestic passport denials for so called ‘midwife cases’ are at a 6-year low. The reporting is a political cheap shot.”

The latter may be true. The Post is one of the president’s largest adversaries, owned by Amazon CEO Jeff Bezos, the butt of Trump’s frequent Twitter jabs. But their cited immigration attorneys, who are there dealing with these cases first-hand, claim there are more cases of these denials being for illegitimate reasons. And it’s being verified by other publications.

“I’ve had probably 20 people who have been sent to the [immigration] detention center — U.S. citizens,” Texas-based attorney Jaime Diez first told The Washington Post, currently representing dozens of U.S. citizens seeking cases against the border patrol on this issue. His claims were joined by immigration attorney Lisa Brodyaga, based in San Benito, Texas, who provided Snopes with similar accusations that the process of proving citizenship has “become much more onerous.” She claims that the procedure used to involve a lawsuit where presented evidence would prove them right.

Now the government appears to be the one taking these cases to trial, on the taxpayer's dime, rather than leaving the process to be conducted between both parties. “That is the most dramatic escalation and the most damaging for us,” Brodyaga told the fact-checking website. “We have this gut feeling that they’re doing this to drive us out of business more than anything else.”

Brodyaga continued to explain that because of heightened skepticism, all children within the care of a particular midwife could be placed on a “list of suspect births” because of a lack of knowledge about who specifically on that list wasn’t U.S. born. The government essentially inflating the process amount due to this near-impossible standard of verification.

“That’s why you see hundreds of people affected,” she explained. “[It’s] not because that’s how many births [the midwives] falsified, but [because] that’s how many they were forced to claim to avoid going to prison.” She claims some of these lists were “sat on” for years under both administrations. “Only fairly recently these lists are being brought out of cold storage and all the people on them are having their passports revoked or denied.”

This is an obvious danger to citizens’ freedom of movement, but Brodyaga claims these consequences go beyond travel restrictions. She told Snopes that once a passport is denied or revoked, the government, without proof, can just declare that a birth certificate is potentially fraudulent and decide to no longer produce more of it — meaning they could be lost forever.

She added: “And you’ll always be looking over your shoulder, wondering if they’re going to put you in deportation proceedings.”