The Department of Education has rejected 99% of applications for an expanded student loan forgiveness program set up by Congress, NPR reports.

A Government Accountability Office report published Thursday shows that the Education Department has bungled the rollout and rejected 99% of applicants.

The department approved just 661 of 54,000 applications in its first year and has doled out a mere $27 million of the $700 million Congress allocated for the program.

Though the Congressional bill specifically requires the education secretary to “develop and make available a simple method for borrowers to apply for loan cancellation,” the GAO report found that Secretary Betsy DeVos did the opposite. More than 70 percent of TEPSLF applications were rejected because applicants did not know they also had to apply for the PSLF even if they weren’t eligible.

“The process can be confusing for borrowers who do not understand why they must apply separately for PSLF — a program they are ineligible for — to be eligible for TEPSLF,” the report said.

“Requiring all loan servicers to include TEPSLF information on their websites and including TEPSLF information in its online tool for borrowers would increase the likelihood that borrowers are able to obtain the loan forgiveness for which they may qualify,” the report said. 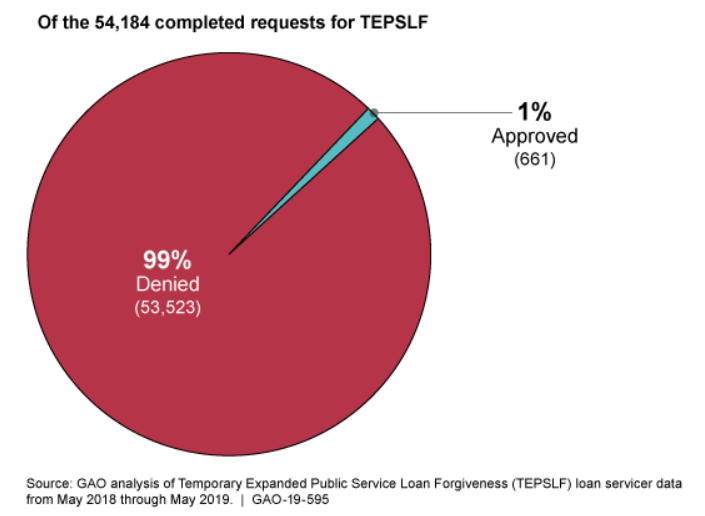 The GAO’s Melissa Emrey-Arras, who led the review, told NPR that the findings left her “discouraged” and “disheartened.”

“I mean, the hope is that you have this temporary expanded process, and you want it to help a lot of people. And you don't want borrowers to be confused about the eligibility criteria and to face a high denial rate. And yet, that's what we found,” she said. “It doesn't make a lot of sense, from a borrower perspective, as to why you would need to apply for a program that you know you're ineligible for. Yet that's the way the process works."

Rep. Bobby Scott, the chairman of the House Education Committee, told NPR that he would conduct hearings, arguing that the department’s administration of the program was not “competently” run.

"The students are entitled to it," Scott said. "They have fulfilled their responsibility over a decade of public service, and they're entitled by law to have those loans discharged. ... It is the constitutional responsibility of the executive branch to take care that the laws be faithfully executed, and we will focus public attention on the fact that they are not doing it."

The GAO released a report showing the Department of Education has denied loan forgiveness to an alarming 99.6% of individuals who applied to the Public Service Loan Forgiveness Program. This is deeply troubling and we’re calling on Betsy DeVos to release more information. pic.twitter.com/baUF49WkOY