"During those conversations, Carlson diminished the actions of Warren Jeffs, then on the FBI's 'Ten Most Wanted Fugitives' list for his involvement in arranging illegal marriages between adults and underage girls, talked about sex and young girls, and defended statutory rape," Media Matters wrote.

Radio segments were recorded in Tucson from 2006 to 2011. And one of the clips Carlson size of Supreme Court Justice Elena Kagan, "I feel sorry for unattractive women. I mean, it's nothing they did, you know. Nobody deserves that. And men are just mean."

He also called MSNBC Contessa Brewer “sassy and cute,” and described Hillary Clinton as “anti-penis” and said, "you look at Hillary and you know in your heart that if she could castrate you, she would."

But perhaps the most shocking comments of all were his comments about rape and marriage with underage girls.

Carlson jokingly downplayed the crimes of cult leader and convicted child sex offender Warren Jeffs. "I am not defending underage marriage at all," Carlson said in a clip from 2009. "I just don't think it's the same thing exactly as pulling a child from a bus stop and sexually assaulting that child."

When the host of the radio show called Bubba the Love Sponge pushed back on Carlson comments, he doubled down saying, "Hold on a second. The rapist, in this case, has made a lifelong commitment to live and take care of the person, so it is a little different. I mean, let's be honest about it," Carlson said.

In other clips, he calls women "extremely primitive," says he feels "sorry for unattractive women," uses the c-word to describe a woman, calls one woman a "pig" and refers to two other women as "whores."

Just hours after Media Matters released the story Tucker Carlson took to Twitter to defend himself. 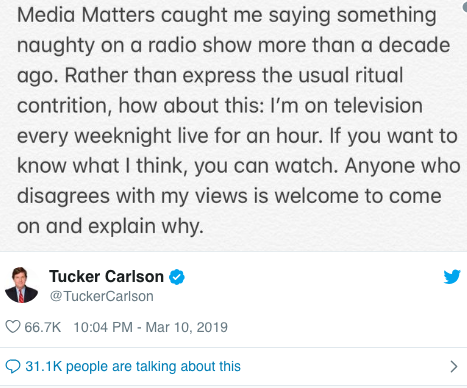 The audio clips have surfaced at a time when Fox is holding fundraisers to woo advertisers. Recently, Fox has also reprimanded another Fox Media host, Jeanine Pirro, for her remarks about congresswoman Ilhan Omar’s Islamic religious beliefs.

Despite attempts by Republicans to dismiss the issue as naughty but harmless behavior from the past, Democrats and leftists were quick to call for Carlson's resignation or dismissal from Fox.

"Shame on you. You have daughters," tweeted actress and MeToo movement advocate Alyssa Milano. 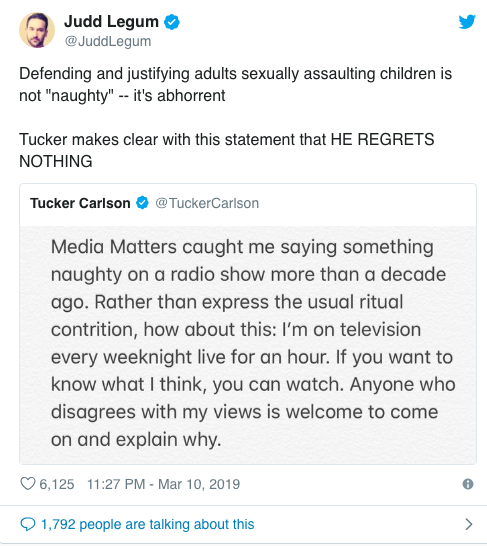 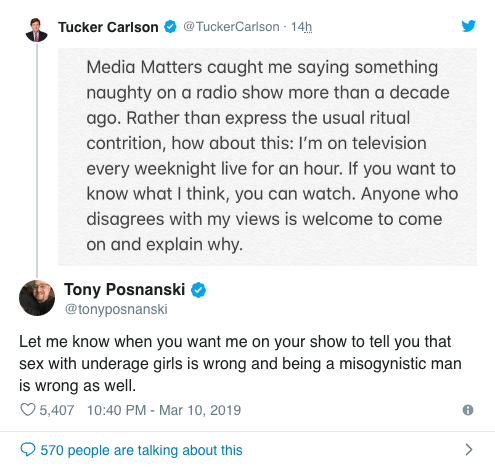