Trump's Travel Ban Is The Worst Decision He's Made Yet

It’s been a tumultuous weekend. As pretty much everyone is aware, on Friday, President Trump signed yet another executive order, this one barring travel for anyone from seven Muslim-majority countries for 90 days and suspending all refugee admission for 120 days. However, those in his administration weren’t even sure what his order meant. Sources report that his officials weren’t immediately sure which countries’ citizens would be barred from entering the US. The Department of Homeland Security was left making a legal analysis on the order after Trump’s signature. According to court filings, a Border Patrol agent, confronted with arriving refugees, referred questions to the President himself because the agent wasn’t clear on what was happening.

The rest of the world didn’t understand either.

Chaos erupted at airports across the country as people hailing from Iraq, Syria, Iran, Libya, Somalia, Sudan and Yemen were barred from entering the US. These countries were named as “countries of concern.” The order also banned the admission of all refugees for the next four months, along with calling for a review into suspending the Visa Interview Waiver Program, which allows travelers from 38 countries to renew travel authorizations without an in-person interview. This is the extreme vetting Trump promised during the campaign, but the vagueness of his order caused groups of people- some green card holders, some with valid visas- to become snared in his shut-down. By Saturday night, federal judges had temporarily and partially blocked Trump’s order.

This didn’t stop thousands from heading to their closest airports and protesting against this travel ban. Although many right-wing commentators and outlets like Breitbart tried to downplay the ban by discrediting the media moniker of “Muslim ban,” the fact remains that the order targets countries from which the US has received zero fatal terror attacks. According to the Cato Institute, between 1975 and 2015, foreign nationals from the banned countries have killed no Americans on US soil. Despite this fact, many airport agents were forced to follow the order and had to detain around 100 people.

An estimated 400 lawyers signed up to represent detainees along with countless law students, and legal aid workers and translators arrived at airports to work pro-bono to help these detainees. Finding updates and posts on social media offering help to these individuals and detainees is a humbling experience of human kindness.

By Saturday afternoon, around 5,000 protesters swarmed JFK’s terminal four alone. But the fight wasn’t over. Even after the American Civil Liberties Union in New York won their temporary stay on the ban from federal judges in New York, Virginia, and Massachusetts, reports filtered in on Sunday that select Customs and Border Protection agents were defying the orders of federal judges and not releasing people.

Canadian Prime Minister Justin Trudeau, took to Twitter late Saturday to respond to the controversy, despite the fact that Canadian airlines had been forced to turn back US-bound passengers all morning. 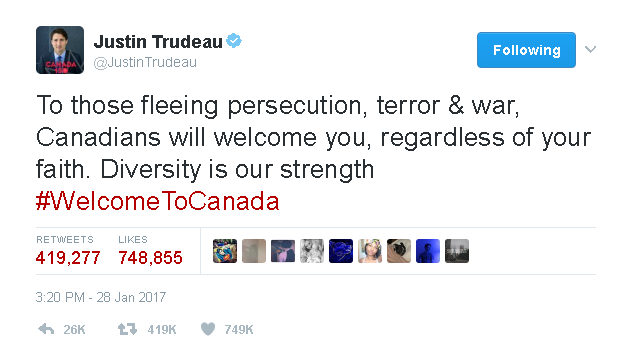 He went on to detail in what ways the Canadian government was looking to clarify the restrictions on travel, as well as sharing a photo of himself welcoming refugees last year with the hashtag #WelcomeToCanada and #ACanadianIsACanadian. They quickly began to trend online, especially as Republican senators John McCain and Lindsey Graham broke rank and publicly criticized the order.

“Such a hasty process risks harmful results,” John McCain and Lindsey Graham said in a joint statement. “We fear this executive order will become a self-inflicted wound in the fight against terrorism.”

That sentiment was echoed by the Iranian foreign minister, Javad Zarif, who went on Twitter to say that the ban was “a great gift to extremists,” adding that the “collective discrimination aids terrorists recruitment by deepening fault lines exploited by extremist demagogues to swell their ranks.” Yemen’s government warned of the same, saying that Trump’s order would only encourage extremism. “Yemen expresses its dissatisfaction after the order prohibiting, even for a limited time, the entry to the United States of people holding a Yemini passport,” one of their foreign ministers said.

Sudan called Trump’s decision “very unfortunate” considering the “historic steps” taken under the Obama administration to lift sanctions for cooperation on combating terrorism. “It is particularly unfortunate that this decision coincides with the two countries’ historic move to lift economic and trade sanctions...and just as economic and financial institutions as well as businessmen in the country were set to continue developing their investment projects.” The 20-year-old trade embargo against Sudan had been lifted under Obama, but the action has now been delayed by 180 days.

The Iraqi government, on the other hand, said it understood the security motives behind Trump’s order, but underlined that their special relationship with the US should have been taken into consideration. Many Iraqi refugees who had been accepted into the US in the past decade have all been subjected to extensive vetting, despite the fact that many had worked for the US military or government in the past. “Iraq is the frontline of the war on terrorism,” the Iraqi parliament’s foreign affairs committee said after a meeting on Sunday in Baghdad. “It is unfair that the Iraqis are treated in this way.” A strongly worded statement also came from a spokesperson for Popular Mobilisation, an Iraqi coalition of paramilitary groups fighting Isis, who called on the Iraqi government to ban US nationals from entering the country, and to expel those currently on Iraqi soil in response to the travel ban. The Iraqi government has since called on Washington to review its “wrong decision.”

Libya, Somalia, Syria have not released official statements, although the Yemeni embassy in Washington posted a warning on Facebook advising people not to travel to or from America. Throughout Europe, many newspapers have posted anti-travel ban articles. The German newspaper Handelsblatt published the headline, Trump’s religion war, directly contradicting Trump’s statements that his latest executive order was not a Muslim ban.

Yeah, the rest of the world didn’t believe it either. “Trump sows trouble with his Western allies” was the lead headline on the economic French paper Les Echo, and La Razon from Spain lead their Monday over with, “World outcry against Trump’s Muslim veto.” Someone should tell Trump that you can’t speak about a Muslim ban during your campaign, sign an executive order banning citizens from Muslim-majority countries, and expect people to believe that this does not have racist and religious motivations.

Prime Minister Theresa May is under a tremendous amount of pressure to cancel a state visit with Trump now. With a petition that has amassed over 1 million signatures and thousands taking to the streets in protest, it took a surprisingly long time before her offices issued a press statement stating that she did not agree with the policy.

The UK crowds were just some of the thousands of solidarity protests across the world. Protests from New York to Atlanta, Dallas to Seattle were alongside many other countries’, while others continue. Even yesterday, more than a thousand of our northern neighbors gathered outside the US Embassy in Ottawa and Toronto to protest the order up in Canada. After a shooting at a mosque during evening prayers in Quebec City Sunday night, it appears many Canadians are looking to blame the radical attack on the racist and anti-Muslim rhetoric Trump has enacted with this travel ban.

Zeid bin Ra’ad Zeid al-Hussein, the UN rights chief, even said in a tweet that “discrimination on nationality alone is forbidden under human rights law,” adding that “the US ban is also mean-spirited and wastes resources needed for proper counter-terrorism.” In a formal statement, the UN High Commissioner (UNHCR) for Refugees Filippo Grandi wrote:

“UNHCR estimates that 20,000 refugees in precarious circumstances might have been resettled to the United States during the 120 days covered by the suspension announced Friday, based on average monthly figures for the last 15 years. Refugees are anxious, confused and heartbroken at this suspension in what is already a lengthy process.”

When the UN begins speaking out against you, you know you’ve fucked up. But who can blame them? Trump, you can’t throw around concepts of Muslim camps and Muslim bans during your campaign, and then expect the world not to make the connections to this executive order. How naive do you think we are? This is the most idiotic move of all the executive orders you’ve signed in your first week. I don’t give a shit if Kellyanne Conway wants to have me fired for criticizing Trump. Newsflash Conway: you can’t tell thousands of Americans to shut up just because they’re critical of Trump. We’re not a fascist nation- not yet, anyway. Now that we’ve been downgraded to a flawed democracy, we need to fight harder than ever.

This is not who we are. We are not racist, discriminatory assholes, and Trump’s ban goes against American values. Look, I said it on his inauguration: I really hope Trump proves all of us naysayers wrong. I really didn’t want him to fail, because as some chatter online pointed out, wanting him to fail is like wanting a pilot to crash a plane we’re all on. But so far, in the last 10 days, Trump as a pilot for America has rendered many people scared. I had this hope that logic, or maybe his co-pilots, or even flight crew can overcome his lack of experience and show him how the machinery works to get the plane off the ground. But he’s just been driving down the runway erratically. He’s not looking at safety requirements, he’s not listening to the crew who could help him- in fact, most of them resigned or were fired, according to his camp- and now this. He’s stopping people who want to get on the plane; people who have been given clearance to get on, people who are running away from unimaginable horrors are now getting barred because of him. Hell, he’s telling people who are already on the plane to jump off, all because he doesn’t want them on it.

I hope we land safely. I hope Trump brings everyone the little bags of peanuts he promised, instead of following through on these insane campaign promises no one thought he would. But those of us who can see the potential crash coming aren’t going to stay silent. We’re not going to sit here with our headphones on, watching a movie. We’re going to scream the whole goddamn bumpy ride until we can save ourselves from this nightmare.