Before taking the reins of America’s highest office, Donald Trump was once an anti-establishment warrior against Big Pharma — the powerful institution he once said was “getting away with murder” due to price gouging tactics that kept patients away from life-saving drugs. Once in the White House, however, the president has no clothes — exposed as the inconsistent, controlled opposition all too friendly with Washington’s swamp.

Laughter filled Congress when, during the president’s first State Of The Union address, a promise was made to “substantially” decrease the high price of prescription drugs — an “injustice” the commander in chief swore to overturn:

“One of my greatest priorities is to reduce the price of prescription drugs. In many other countries, these drugs cost far less than what we pay in the United States.

That is why I have directed my Administration to make fixing the injustice of high drug prices one of our top priorities. Prices will come down. Watch.”

As to be expected, the public is behind this message - even if Congress is not.

Pew Research found the majority of Americans believe that the federal government does not provide enough help for older people (65%), poor people (62%) and the middle class (61%), contrasted by the two-thirds of the country (64%) who believe the government provides too much help for the wealthy. This gives President Trump an incentive to echo the monopoly-busting rhetoric of Teddy Roosevelt —populist words adapted to take on a massive industry monopolized by pharmaceutical patents.

Back in 2003, under former President George W. Bush, the anti-consumer protective Medicare Prescription Drug, Improvement, and Modernization Act was signed into law. Under this piece of legislation, the federal government was forever prohibited from negotiating drug prices on behalf of the American citizens — giving economic price power to a two-tiered, far too friendly “free” market where smaller companies must pay hefty royalties to make (patented) live-saving drugs.

This gave President Trump, the Republican political outsider, a chance to both shit on the Bush dynasty (represented in the man’s pitiful primary rival Gov. Jeb Bush) and present himself as the billionaire for the people.

Addressing an enthusiastic crowd of about 1,000 people in Farmington, New Hampshire, then-candidate Trump argued the federal government should allow Medicare to negotiate prices, like other modern countries, screaming:

“We could save $300 billion a year by getting discounts. We’re the biggest buyer of prescription drugs. We don’t do it. Why? Because of the drug companies.”

When in federal office, however, where are the president’s passionate words on Medicare? They’re mentioned briefly in Michael Wolff’s unverified political gossip novel “Fire and Fury: Inside the Trump White House,” where he supposedly floated the idea of a Medicare-For-All insurance scheme, but the dealmaker in chief made no mention of the program’s place in drug price negotiations. Vox, which do lean far-left, reported on a real case of Trump walking out of a meeting with the talking points of the last people he encountered — Big Pharma lobbyists.

We’re the largest buyer of drugs in the world, and yet we don’t bid properly.”

Eleven days after his inauguration, however, the president switched his tune of Big Pharma lobbyists, recalling after the meeting:

“I’ll oppose anything that makes it harder for smaller, younger companies to take the risk of bringing their product to a vibrantly competitive market. That includes price-fixing by the biggest dog in the market, Medicare, which is what’s happening. But we can increase competition and bidding wars, big time.

I thought Medicare couldn’t do anything on drug prices?

I thought it was the drug lobby that was stopping Medicare from being “the biggest dog in the market,” since it currently has no place in that market — the dog the president was formerly backing in his bid for the highest office?

I thought President Trump was their nightmare? Why the sudden Pharma-friendly policy that includes tax breaks, deregulation, and limited government enforcement, introduced in last Monday’s budget proposal? It does address the issue of out-of-pocket expenses, discounts and rebates for seniors that could increase their private healthcare premiums, and decrease catastrophic coinsurance pay from five percent to zero percent — but it doesn’t address the substantive issues of too much trust between the companies, the highly priced patents that are innovation-crushing, and how Medicare and Medicaid (and by extension the dealmaker in chief) have sacrificed their space at the drug negotiation table.

Could it be that Pharma-friendly policy comes when you have a president who shares his White House quarters with former Big Pharma types? The president was practically kissing the ass of Alex Azar, his new pick to lead The Department of Health and Human Services, who just so happens to be a former member of one of Big Pharma’s notorious price gougers: 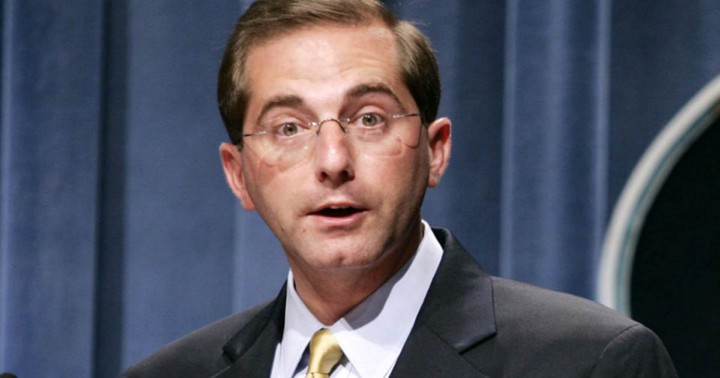 This is a man the president assured the public will “be a star for better healthcare and lower drug prices” — after he just left the price hiking pharmaceutical company Eli Lilly. While occupying a top executive position at this institution the company tripled the price of Insulin towards the middle of August 2017 — right under the watchful eye of the faux-populist president and former health secretary Tom Price.  For those keeping score at home, that’s the same Tom Price who was also a Big Pharma crony, who entirely opposed price negotiations, and who was also forced to step down amid a scandal over using tax money for lavish private jet rides.

You don’t need to be an expert to see the president and the administration bullshitting the public here, but Vox consulted a health policy expert, Professor Len Nichols at George Mason University, who came to that exact same conclusion:

“I think they think they had a good year. They dodged a bullet. I think of the pharmaceutical pricing issue as somewhat of a titanic struggle between pharma and the plans. If you think of it that way, in the Trump administration, pharma won Round 1.”

Assuming Trump wasn’t the fall guy in a fixed fighting match, of course. He was happy to play the media narrative of a fighter, going head-to-head with alleged price hiker Martin Shkreli of Valeant Pharmaceuticals. Asked about the man’s price increase of Daraprim, bumping up the the anti-parasitic drug by a factor of 56 (from $13.5 USD per pill to $750 USD), leading him to be referred to as “the most hated man in America,” Trump told reporters at a press conference in South Carolina:

That guy is nothing. He’s zero. He’s nothing. He ought to be ashamed of himself. Hedge fund guys are getting away with murder and he’s a hedge-fund guy, who, as you know — the only one that I’m raising taxes on.

TrigTent has already discussed the lie of Trump raising taxes on hedge fund guys — opting to raise them on poor-middle class individuals like yourselves, but this moral sentiment was shared by Sen. Bernie Sanders (I-VT), the avowed democratic socialist who proposed an amendment that could bring down drug prices in a pro-free market way: allow the importation of cheaper drugs from modern, well-regulated countries such as Canada, Australia, and others.

His proposal is supported by a stunning 72% of voters, however, it was soundly rejected by the establishment members of both the Republican and Democratic party. Meanwhile, the president did not comment on the vote… despite campaigning on this exact issue.

On the president’s website, a seven-point plan outlined exactly how he planned to tackle healthcare policy he saw failing under former President Barack Obama, with the last provision detailing how he wanted to import drugs from overseas — curiously, however, this seven-point plan was removed from the website altogether.

When he introduced the plan, the president declared:

“Remove barriers to entry into free markets for drug providers that offer safe, reliable, and cheaper products. Congress will need the courage to step away from the special interests and do what is right for America.

Though the pharmaceutical industry is in the private sector, drug companies provide a public service. Allowing consumers access to imported, safe, and dependable drugs from overseas will bring more options to consumers.”

The Senate, however, voted down the amendment that does just that 52–46, with Sen. Dianne Feinstein (D-CA) and Sen. Jeff Sessions (R-AL) not voting. The vote was not based on party lines, with The Intercept’s journalists Zaid Jilani and David Dayen reporting 13 Republicans joined Sanders and a majority of Democrats in supporting the amendment — defeated by a majority of Republicans and 13 turncoat Democrats who voted down.

And not a single tweet was released about all this.

The president didn’t even attack Sen. Cory Booker (D-NJ), the man labeled a rising star™ in the Democratic Party, one of 2020's presidential contenders and one of Congress’ biggest attack dogs working in Big Pharma’s interest. 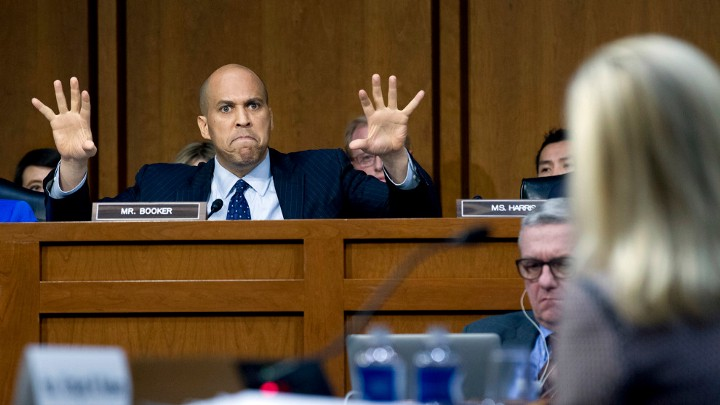 Booker, among other Democratic colleagues who opposed Sanders, were even further in the pockets of Big Pharma than the president. MapLight reports Booker to have received more pharmaceutical manufacturing donations in his lifetime than any other Democratic Senator - $267,338. This was in addition to other Democrats who received six-figure donations from the industry such as Sen. Bob Casey Jr. (D-PA), Sen. Patty Murray (D-WA) and Michael Bennet (D-CO), who also conveniently sided with the president in denying the amendment.

The Hill reports that the administration, through an official at The Department of Health and Human Services (HHS), is placing the blame more on Congress rather than their own inaction on drug price victories — a movement similar to the Republican passing of the unpopular tax bill:

“HHS will continue to look for opportunities for administrative reforms in the drug pricing space, but congressional action is necessary to make many of the reforms outlined in the budget permanent over the long term.”

Rachel Sachs, a professor at Washington University in St. Louis with her career delving into issues regarding the price of drugs, told The Hill the current administration’s actions provide relief “for some Medicare and Medicaid beneficiaries,” but are nowhere near enough in order to benefit the majority of Americans — and nowhere near what the president promised.

“This is a very pharma-friendly set of proposals in many ways,” she said.