What a time to be alive, eh? We have an American president who releases a list of the worst news stories of the year - all to antagonize the mainstream media. They said that President Andrew Jackson had a contentious relationship with the press. I have a feeling this is bigger.

Unless you were taking a sabbatical from social media, you heard about Trump's fake news awards. Through GOP.com he released the worst 11 media screw-ups from 2017. The article got so much traffic, it crashed the site, forcing WikiLeaks to post mirror links. Never have we seen a President so aggressively criticize the media for their shoddy coverage. Sure, Obama occasionally took pot shots at Fox News. But this is different. Much, much different.

Throughout last year, critics complained about Trump's "abuse" of the media. They claimed it was an attack on the First Amendment. A United States President attacking the press? That must be a violation of the Free Press, somehow. Right? And this list of fake news awards, that must be the icing on the cake.

It is, and it isn't. We have to be honest about what Trump has been doing since his campaign. He is waging war against the establishment media. But as President, does that mean he's violating the First Amendment?

That amendment prevents Congress - and ostensibly the federal government - from passing laws that abridge the freedom of the press. So in the strictest of terms, President Trump is not violating the mainstream media's ability to write stories. In fact, you can argue that his continued antagonism only gives them more attention.

In the past, interest in news and politics died down after an election. Not this time. If anything, attention has grown since Trump took office. His continued attacks on the liberal media? It only gives them more to talk about, drawing in more viewers who share their sentiments. You're welcome, liberal news.

But in another way, the liberal media is right. It's never been Trump fighting against the press. Alone, that is. What Trump is doing is pitting the American people against a press he considers dishonest, unfactual, and corrupt. He is exposing the media to greater scrutiny. When he calls out a news outlet for shoddy reporting, he's not doing it for their benefit. He's doing it to show the American public that the media lies. In that way, the press is losing ground with potential customers.

From that point of view, you can say Trump is violating the First Amendment. But only if he was attacking honest, hard-working, diligent reporters. It seems like Trump is only exposing press coverage that is deliberately dishonest. If they were doing a good job, Trump would have nothing to complain about.

Despite some very corrupt and dishonest media coverage, there are many great reporters I respect and lots of GOOD NEWS for the American people to be proud of!

You may not believe that tweet, but just take a look at the actual list of stories that made his fake news award.

That was a pretty big blunder. The CNN video zoomed in on Trump, so you couldn't see Abe dumping his feed into the water first. While CNN was very careful about how they phrased the tweet, outlets like Mother Jones and Jezebel ran with the idea that Trump was being rude while visiting Japan. All to solidify the idea that Trump's a boorish pig in the minds of their readers.

Most of the stories that made the list show an obvious bias on the part of the mainstream media. These aren't just simple mistakes. This is a pattern of intentional attacks on the Commander in Chief. The goal is to create a false image of the man we elected to the White House. All to smear his reputation enough so that he won't be successful in office.

And of course, destroy his chances at reelection in 2020.

Now ask yourself something: is that really the job of the media? Regardless of a reporter's personal views, is it right for them to go out of their way to discredit the President of the United States? Especially when the news isn't factual?

Okay, we get it liberals. You don't like the fact that Donald Trump is president. That was a fricking Simpsons joke. But he's the President now. And all your doom and gloom predictions aren't coming true. He's actually working hard to help this country. Does your hate really justify obviously false stories like this: 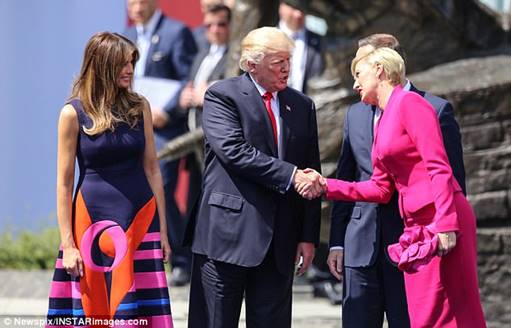 I mean, duh. Why report something that can be easily rebuffed? Does the media think their readers are that stupid? That they'll believe anything they tell them? Obviously, someone took a picture of the handshake. And it would be posted, eventually, to the Internet (most likely the White House had their photographer on hand who could have easily posted a pic). Why do something so pathetic? Something that only embarrasses Newsweek, not the POTUS?

This includes the insulting story about the MLK bust. 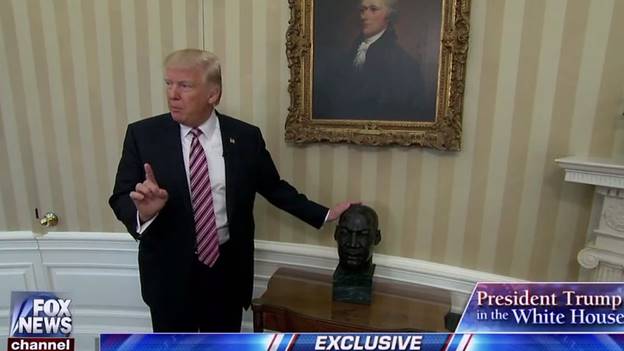 That was a clear attempt to make Trump appear, not only racist, but disrespectful to one of the most celebrated Americans in our history. In both of the above cases, it could have been simply an error. Newsweek didn't catch the handshake; Time didn't see the MLK bust. Yet there is this thing called due diligence. And fact-checking. Once upon a time, the press verified their stories before posting them. To make sure they weren't spreading false information and ruining their reputation.

Today the liberal media is so hell-bent on destroying Trump, they can't even do the basics before posting a story. They are so eager to slander the President, they just believe these fake stories and run with them. This Trump Derangement Syndrome is making the media look like a bunch of amateurs. Don't they see they are playing into Trump's hand?

Come 2020, they won't have a leg to stand on. Any attempts to confront Trump - even legitimate ones - will be easily dismissed by the man. The media has for so long cried wolf, few American voters will believe them.

The only question is: will they bother to change? Judging from the dreck that pours out every day, I don't think so.