Last week, the president signed two controversial bills into law — FOSTA, otherwise known as the House’s Fight Online Sex Trafficking Act, as well as SESTA, the Senate’s Stop Enabling Sex-Trafficking Act. In typical dog and pony show fashion, surrounded by Republican politicians and victims of the sex trafficking trade, the president used the opportunity to present himself as the figure of law and order preserving America’s freedoms.

But is this really the case?

As Vox reports, a contradictory sledgehammer was just cracked against the infamous provisions of Section 230 laid out in the 1996's Communications Decency Act, the legislation protecting unwitting online businesses from facing punishment for the actions of third-party content creators:

“No provider or user of an interactive computer service shall be treated as the publisher or speaker of any information provided by another information content provider.”

To clarify, this protects ISPs (Verizon, AT&T) and online public platforms (YouTube, Facebook) from being held legally responsible for the actions of criminals and extremists who may exploit their platform for illegal means. Much like 2012’s highly controversial Stop Online Piracy Act (SOPA), which failed to pass Congress due to heavy resistance from freedom advocates, these protections ensure the government isn’t given the power to fully shut down the internet’s most powerful websites based on content produced by their users.

FOSTA-SESTA strip away these website protections through a rather Orwellian trick — making these websites accomplices to the crimes of other people, even though they likely violated the website’s Terms of Service anyway. The law states that anyone found to “promote or facilitate prostitution” online may face between 10 to 25 years in a federal prison. No definition of “promote” was laid out, giving uncomfortable leeway for the Trump administration to crack down on both the sex market, consenting or otherwise, and potential harms that sex work advocates could face when they use their online freedom of speech to campaign for the legalization of safe prostitution.

The Electronic Frontier Foundation, an organization dedicated to the protection of free speech, formally stated that FOSTA is “the most significant rollback to date of the protections for online speech in Section 230.”

Under the thump of Trump’s big government, the once successful BackPage.com, a hub of freelance sex work and alleged sex rings, was forcibly shut down after the site’s former co-founders Michael Lacey and James Larkin, CEO Carl Ferrer, and COO Andrew Padilla were charged with 93 counts of facilitating prostitution and laundering the revenue. 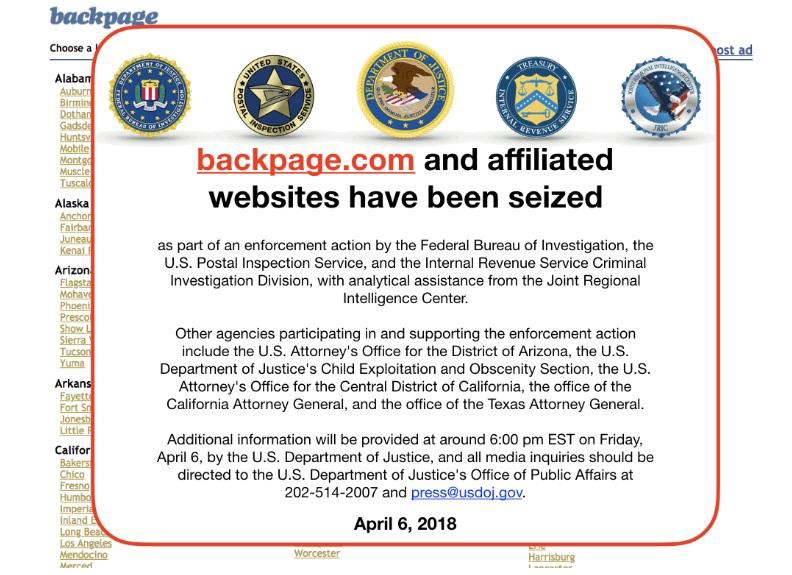 This follows the scandal surrounding Rentboy.com, another sex work site, whose owner was recently sentenced to prison for promoting prostitution.

Craigslist shut down their adult section in the United States several months ago to avoid legal risks but released a statement following the law’s passing.

Much like socialism, an ideology often driven by hatred for the rich rather than true concern for the working class, FOSTA-SESTA’s advocates appear to make their argument from the standpoint that online platforms deserve as much punishment as the sex ringers themselves – this, rather than doing anything to make sex safer for the individual. During the days of prohibition, banning consumer goods drove the consumer to a black market run amok with savage mobsters. It didn’t address the dangers of toxic alcohol, but it did leave drinkers to settle disagreements with blood on the streets.

Can these #IAmJaneDoe advocates truly preach safety for America’s sex workers after forcing them to the streets or the dark web? It’s hardly addressing the problem of sex rings when the nation’s law enforcement just took traffickers away from centralized sites like BackPage to the deeper corners of the web that require further investigation. How can you fight sex traffickers when you take away a known hub where they operated? Or are they more concerned that these administrators stored advertisement revenue overseas and didn’t have sufficient policy to stop criminals? Surely moderated advertisement policy that provides legal protection for consenting adults and roots out the traffickers are better suited to a free society.

Where are the #Resistance feminists like Amy Schumer and Seth Meyers? Why, they’re making PSA videos calling on Section 230 to outlaw all forms of online prostitution – the same sort of thing that caused black markets to appear in the first place.

America’s new laws have even forced legal prostitutes in Canada and Australia to venture down shadier paths to work their trade. This is what happened to Jelena Vermillion, an Ontario-based sex worker, who told CBC several workers in her network have considered “walking the streets” since the shutdown of BackPage.

And like that, President Trump and company proved the age-old saying to be true: “When America sneezes, the world catches a cold.”

“This bill jeopardizes not only classified ads sites but also dating apps, discussion forums, social media sites, and any other service that hosts user-generated content,” Emma Llansó, advocate for the Center for Democracy & Technology, said in a public statement regarding the bills. “Smaller platforms will also face the real risk that a single lawsuit could put them out of business.”