Trump vs. Trudeau is a Cage Match Between an Alpha and a Feminist

Canadian Prime Minister/Chancellor of Diversity and Inclusion Justin Trudeau couldn’t refrain from poking the bear, even if he didn’t mean to. Whether you throw a pinecone and connect squarely between a grizzly’s peepers or you unintentionally stumble upon its sleeping cubs, the result is the same; you provoked the wrong carnivore.

Justin Trudeau, along with his gender, ethnicity, orientation, and body positive defenders are about to find out their platform of tolerance and fairness don’t serve much good when an eight-foot-tall, clawed and ravenous meat eater with a rare hunger for soy has decided that it’s hungry, and you’re the meal of choice.

Realistically, it was always going to end up this way. The cordial neighbor charade between Trump and Trudeau wasn’t sustainable. Both men – though Justin would prefer you used the word “humans” to avoid offending the sensibilities of the gender fluid – are too outspoken, and too fundamentally contradictory, for any kind of faux kinship or cooperation to last.

Trudeau, ever-clad in an alternating rotation of cuh-razy! socks, seeing the world through the lens of perpetual slights between (white male) oppressor and oppressed, is the walking, breathing, stuttering antithesis of everything Donald Trump stands for, and everything his policies represent.

Trump rails in favor of a wall on America’s southern border, never hesitating to point out the drugs and bad actors who enter unfettered into America. Trudeau’s favorite quote – and it’s not even close –  is “diversity is Canada’s strength”. Post-travel ban, he planted his flag firmly upon the moral high ground as he proclaimed on social media that he would accept migrants from Syria, Iraq, Iran, Sudan, Libya, Somalia, and Yemen if Trump wouldn’t. 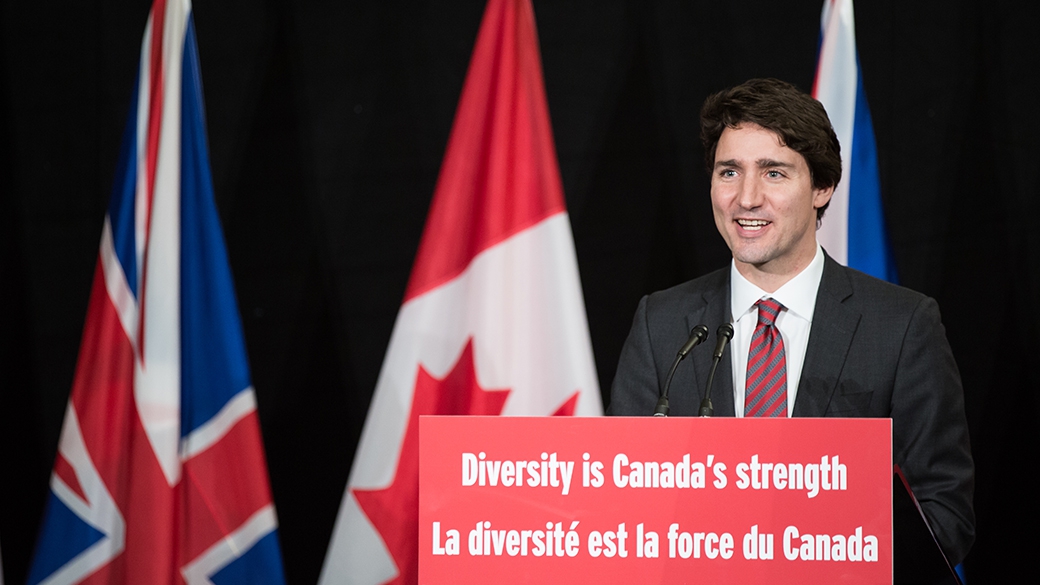 Trump has made rolling back EPA regulations and operating costs for American households and businesses one of the cornerstones of his administration. Trudeau has accused critics of his loathed carbon taxes – environmentalists’ way of punishing selfish consumers of traditional energy by putting a price on an invisible gas – of resorting to “scare tactics” and “political torque”, whatever that is.

For Trump’s stance on Islam, you may as well just refer your questions to Bibi Netanyahu. Trudeau unilaterally gave a former child terrorist $10 million (wouldn’t it be nice?), saying it was “the right thing to do”.

You get the point. These guys were never going to see eye to eye, and betting on longterm civility between the two men was always a longshot. In fact, you’d already owe money to your bookie – you’ve already lost the bet – and we’re only 2 and a half years into Trump’s first term (though Trudeau may not last much longer, if national election trends are any indicator).

The relationship was awkward from the start. The pictorial accounting of their first handshake screams “I’m smiling but, sir, I really, really, don’t like everything you stand for. And no, I’m not willing to say it to your face.” 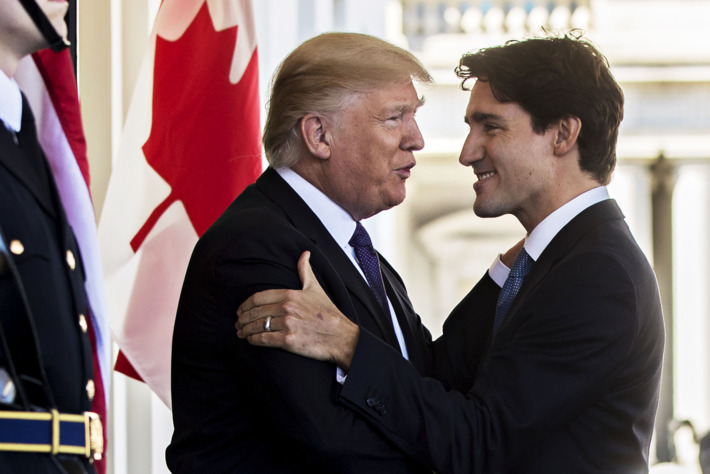 The same picture tells the story of a man, Trudeau, trying desperately to establish some level of alpha-ness, and failing miserably.

I’ve got you by the – ahh, umm, ahh –  shoulder, buddy, AND I’ve been putting in work on the grip machine at my gender non-exclusive gym. Don’t even think about stuffing me in that locker, kay bud? – Trudeau, probably.

Photo opps after their closed-door meeting during Trudeau’s visit to the White House served as further evidence – as if there was any doubt – that Trump would serve as master, and Trudeau whipping boy, in this relationship. Justin never was of the constitution to stand up to Trump, not in any sense of the phrase. But, even so, there’s no coming back from this if you’re J-Tru: 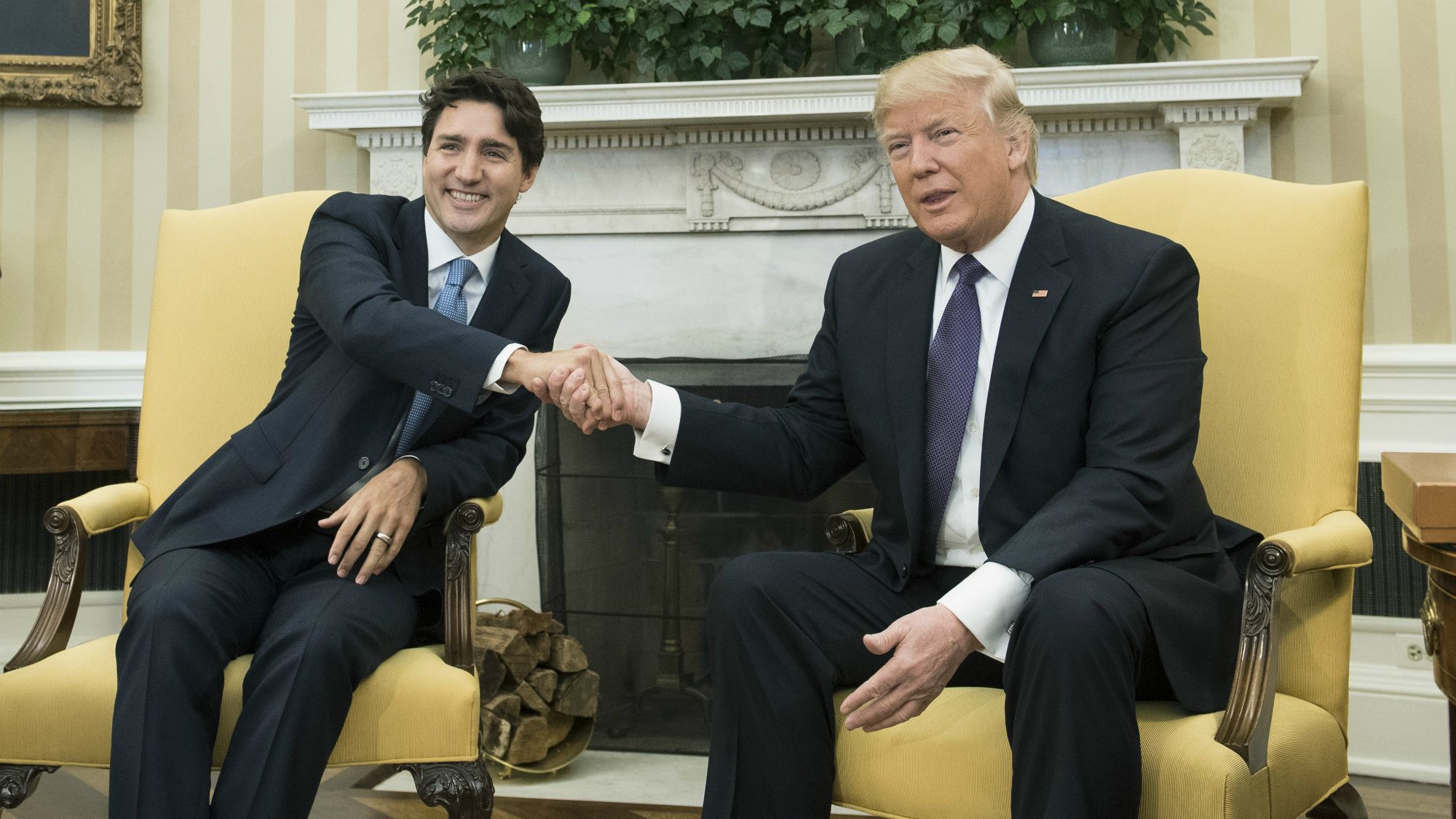 And, really, the bullying has continued ever since, spilling over into NAFTA negotiations.

One can’t help but think that Trump citing national security concerns as justification for tariffs against Canada is little more than a massive troll job.

How much of my shit will this feckless c*nt swallow? – Trump, probably.

The CNN report stating that Donald reportedly asked Justin, "Didn't you guys burn down the White House?" is being used to paint the president as a historically-ignorant meathead. A closer look at the history of the relationship between the leaders tells us that, more likely, it’s another diplomatic swirley.

I can enact tariffs, cite completely absurd historical facts that, even if true, would be patently ridiculous as justification for taxing imports. And what’s this feminist going to do about it? Not a damn thing.

Except hold a press conference, but only once it’s been confirmed, no less than four times, that Trump isn’t going to come back in the room, pull Justie’s trousers down, and administer a firm spanking.

“Let’s be clear: these tariffs are totally unacceptable,” Trudeau told the media, in a tone reminiscent of the last time he caught his son reading gender-specific literature. That tone being, in a word, compassionate scolding. Consider it the Canadian PM’s attempt to reverse the tables on Trump.

Listen here, bub. I’m the parent, you’re the child. Stop stuffing me in lockers, kay? – Trudeau, in his head.

To be fair, Trudeau hasn’t been completely unreasonable. Every leader has to stand their ground at some point, engaging in hyperbolic bluster especially in times of active negotiation. After all, when you have trade acumen of Justin’s sort, you’d be within your rights to impart a bit of education on what is and isn’t standard fare for cross-border deal

The Trump administration’s outsize reaction to what is a fairly standard press conference is undoubtedly more tactical than a reflection of their true sentiment regarding the fairness of the deal. They don’t want a fair deal, they want a pro-America deal.

Plus, that reaction from the Trump camp sends a clear message: stay in your place, boy.

You’ve always been our younger brother, and even when your leaders are at their macho-est, Canada is always going to fall in line with America in matters of substance, or be subjected to an atomic wedgie.

*disclaimer: none of this applies in the case that Jimmy Carter or Barack Obama occupy the White House. In these cases, Canada, do whatever you’d like. No consequences will apply.

These facts, along with drastically opposed views on global heating/cooling/changes in the weather, migration, sovereignty, and Russia undergirded Trump’s campaign of rib-crackingly comical don’t-give-a-shit-ness during this past week’s G-7 Summit.

First, he arrived late to a ‘gender equality breakfast’, a cardinal sin in Justin’s ten commandments.

If you can’t stand for gender equality, you will fall for anything. ­– Trudeau, disgustedly, as Trump’s tardy arrival caused a temporary cessation in the dissertation on the unrivaled power of the Vagina Monologues to combat fascism.

Then, Trump completely skipped the climate change portion of the conference.

But how ever will he understand the destructive impact of the world’s greatest threat, cow farts?

These were open slights to a Canadian Prime Minister whose views are decidedly European, and it sent a clear message: I’m the President of the United States, and I’m not going to indulge your bullshit. In fact, I’ve got a madman to disarm. Peace!

These grievances were undoubtedly fresh in mind as Trudeau ambled to the podium to address the media as a ribbon on an eventful G-7 summit. And, Canadian cordiality be darned, he broke character.

Point is, he went from good, submissive little boy to raging lunatic (by Canadian standards).

“Unacceptable!” the feminist threatened, decrying that he saw “no common sense” in America’s choice to impose steel and aluminum tariffs on their friendly neighbor to the north.

‘PM Justin Trudeau of Canada acted so meek and mild during our @G7 meetings only to give a news conference after I left saying that, “US Tariffs were kind of insulting” and he “will not be pushed around.” Very dishonest & weak’, Trump Tweeted back.

And with that, the grizzly bear thoroughly prodded. The cards are on the table, and things will remain sufficiently awkward from here.

Expect lots of this: 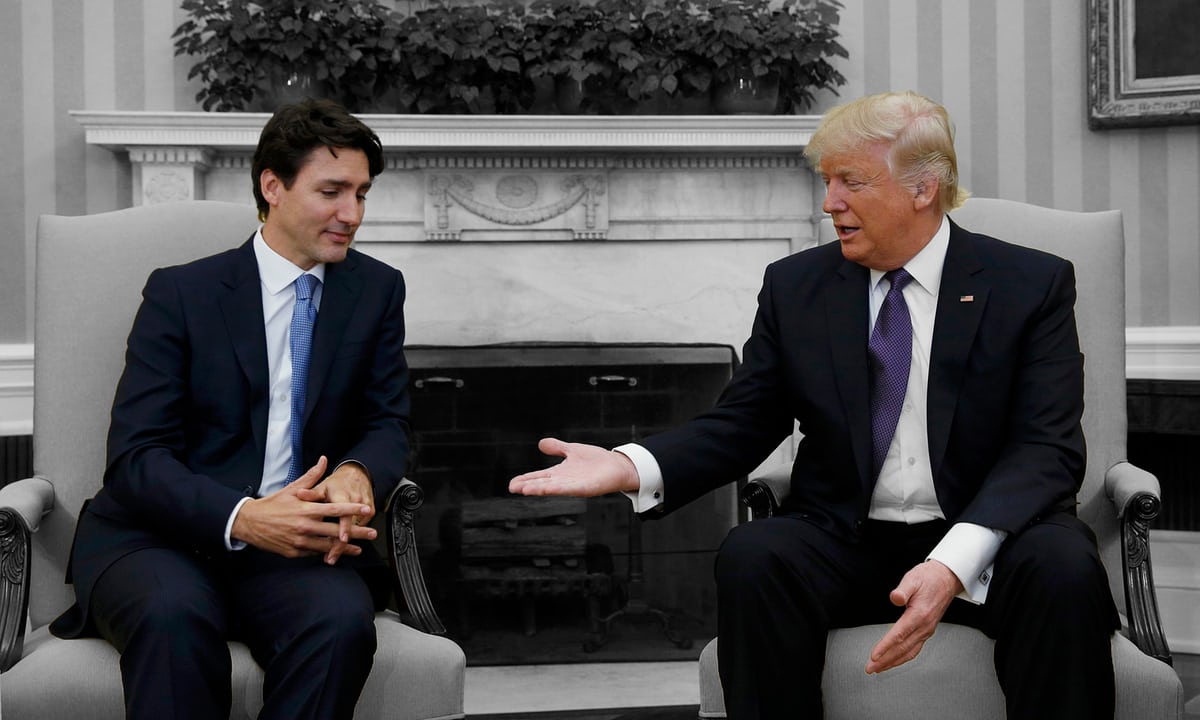 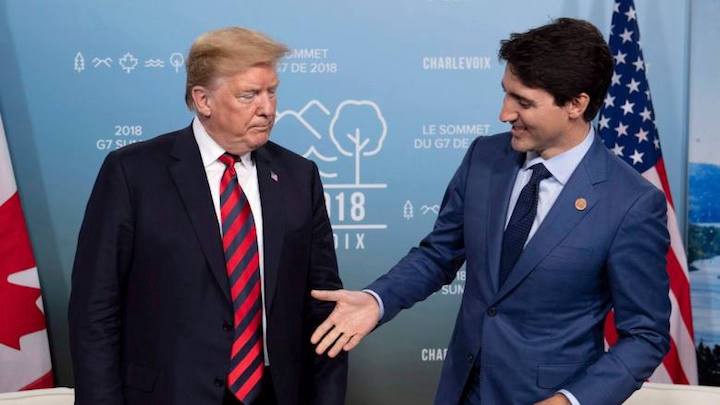 And, at the end of the day, expect Justin to return, meekly and mildly, to the negotiating table, head bowed, metaphorical tail between his legs, toting a massive bag of “sorreys”, asking please, pretty please, for forgiveness and reasonable trade terms.

And Trump will utter reassuringly: “Now, that’s a good boy. Let’s raise those tariffs by 5% and we’ll skip today’s spanking. How’s that sound?” 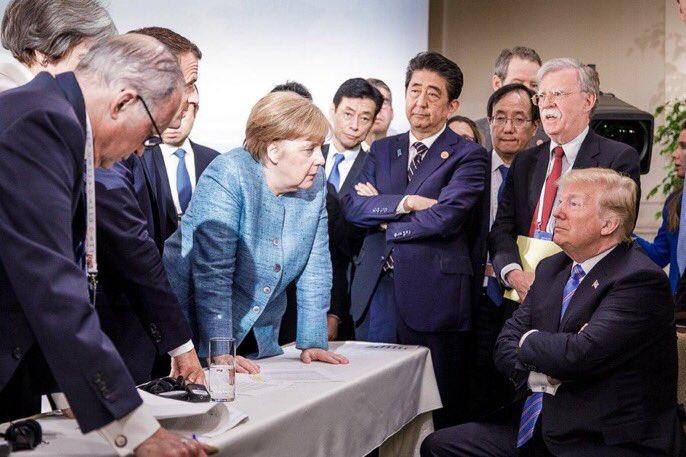