"Those are my principles, and if you don’t like them, well...I have others." These words, attributed to the great comedian Groucho Marx, echo regularly in the hallways where Donald Trump walks. Mr. Trump paves his own golden path to glory with words of convenience: any sound bite that will move his personal ambitions forward for just another day.

This time, the GOP’s House Health Care bill – the one he backed, the one that was celebrated openly in the Rose Garden with cases of beer – is now, apparently, a mean bill. It is apparently not a “great plan,” as he said it was back on May 4, but instead, it is mean, mean, mean. As the Associated Press and many others report, Mr. Trump “used a vulgar phrase to describe the House bill and told the senators, ‘We need to be more generous.’”

Hmmm. Poll numbers slipping again? Did the individual comments of praise and dedication that were demanded – by Mr. Trump – from attendees at Monday’s cabinet meeting not make it to the headlines of the mainstream media? Is the middle-American Republican base discovering that they must pay for their own healthcare and insurance, not just the anonymous left-wing-immigrant-Hollywood elite? Are they starting to take up pitchforks and set them alight? And do flip-flops really go with a Trump branded two-piece suit and red tie?

Everyone, even GOP Republicans, know the healthcare bill is mean, as well as being largely incomplete. But they are not to blame. They only had eight years’ notice to pull one together. The problem here is not the bill itself, but the President’s unique ability to change tack on any issue in a way that simultaneously benefits himself while leaving key allies flailing. 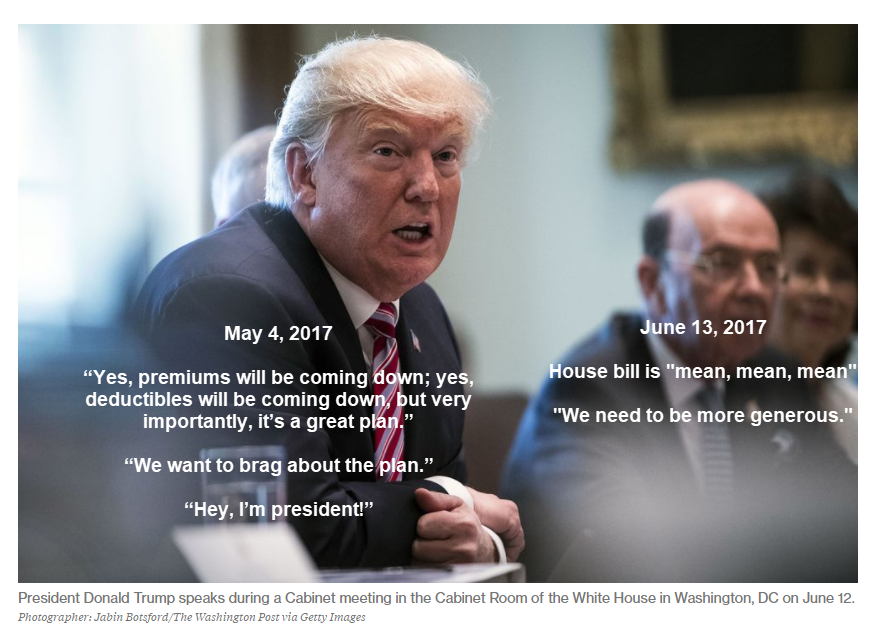 Mr. Trump is a survivor. He says what needs to be said at any given time to win favor. If you are standing in front of a group of Veterans, say something brave and strong about Veterans. Disenchanted average Joes? Say something about that wall. Unionized factory workers? Take Boeing and Carrier to task. Don’t worry about how the changes will get done. That’s an issue for another day. Think quickly about an obviously foreign-sounding brand of car and say bad things about it. Volkswagen. That will do. Oh, and don’t forget to do it while standing in front of Air Force One.

One can argue that every politician lies, and they all say things to advance their own cause. But there are exceedingly few who do so with an inconsistency that crosses ideological lines without any thought for the future. During the French election, Mr. Trump was all for the anti-immigrant ravings of Le Pen, until Le Pen lost, and Monsieur Macron won. Then, Trump’s words were “You were my guy. Glad you won, buddy,” an allegiance that lasted up until the mano-a-mano handshake, which Mr. Trump categorically lost. Then it was, “we don’t like the Paris accord because we don’t like Paris. We like Pittsburgh.”

The problem with this type of ideological opportunism is huge. When a team does not know, moment-for-moment what their leaders’ opinions on a certain bill or situation are, it becomes impossible for them to push through the agenda and make things work without potentially contradicting him. Diplomats, legislators, Secretaries of State and press secretaries are there to maintain a solidity of leadership and planning that not only supports the issue of the moment, but also supports larger things like investor confidence and world peace.

A leader who naively and publicly asks the Prime Minister of Israel at a joint press conference, to find a way to make peace with the Palestinians, like, right now, or who, after grasping the Saudi’s glowing orb of Saruman, publicly takes credit for dumping on Qatar without realizing its military importance to the U.S., is someone whose every action has to be questioned, because the motives are wrong. They are superficial and self-serving. Nothing more.

The leader of any country, company or amateur football team knows that success comes from a team effort. Those in power who say and do anything to anyone cannot be trusted. The resulting efforts of the supporting team will be mediocre, because there is no collective core.

It is one thing to be “unpredictable,” but not when that means hoisting your own team upon your personal gold-tipped petard. Seasoned adversaries, those leaders of countries much older than the U.S., see through such sleight-of-hand bravado and will never raise an eyebrow. They simply solidify their plans and continue unabated.

The Perils of the Flip Flop

Most politicians live in fear of the accusation of flip-flopping. It can be a career-ender. But not, it seems, for the Donald. This week’s “mean, mean healthcare bill” will serve his agenda of dominating the news cycle for another 24 hours, eclipsed by the latest story of a mass-shooting-by-white-male, and hopefully meanwhile keeping the media’s prying eyes off Jeff Sessions.

The desire to cure the current House Health Care bill of its meanness is a prescription intended to serve the health and well-being of one person only. And that person is, of course, as always, the Donald.