Trump Donates $78K To Parks And Cuts $1.5 Billion From Them

President Trump is nothing if not the master of the empty gesture. It’s a type of misdirection that has become so characteristic of his presidency; promises he cannot possibly fulfill, accusations he could never hope to substantiate, blatant acts of hypocrisy for which he expects praise.

Last week, he continued his absent tradition by donating his first quarterly salary to the National Parks Service, specifically to fund the preservation of battlefields.

In a schlocky, tone-deaf, presentation befitting a bizarre reality TV pilot, press secretary Sean Spicer presented a novelty check made out in the amount of $78, 333.32 to Interior Secretary Ryan Zinke and parks superintendent Tyrone Brandyberg, both of whom could not have looked more non-plussed about being used as props in this grotesque political theatre.

Mr. Zinke said they were “thrilled” to accept the money to continue to care for battlefields, and with what I hope was a tongue firmly in his cheek, said, “We're about $100 [million] or $229 million behind in deferred maintenance on our battlefields alone.”

The insignificance of this drop in the bucket cannot be overstated, as the President’s new budget plans to slash funding for the National Parks Services by 12%, or the equivalent of around $1.5 billion in funding. His donated salary represents less than 1% of the cost for the battlefield projects alone. I’m going to take a page from the book of Sean Spicer here and use visual aids to explain the contrast. Here, look at the two numbers next to each other:

Not as effective as I’d hoped. Here’s a circle graph to belabor the point. 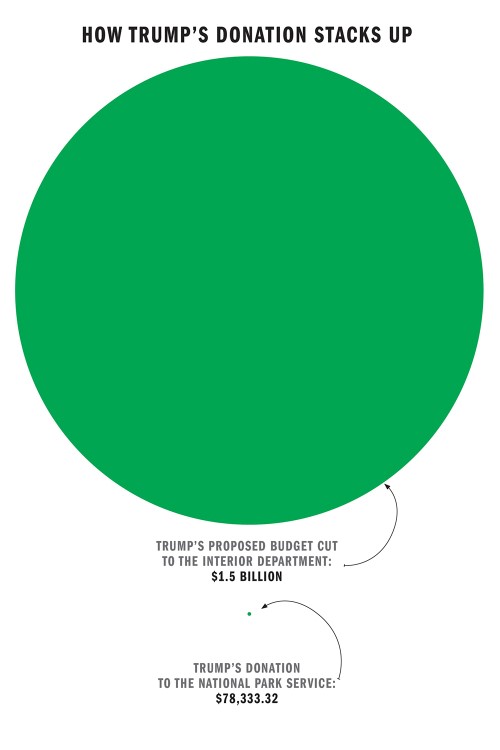 How Secretary Spicer can stand in front of the nation, with a straight face, and celebrate President Trump’s commitment to a promise to donate his salary is beyond me. Is there no shame left in Washington?

The President would have to donate his quarterly salary 1531 more times to make up for the budget shortfall that the NPS will face. His donation does not cover one day’s security expenses at Mar-a-Lago, which the media seems to have forgotten is a completely elective residence and costs taxpayers millions in unnecessary security and travel costs. $3 million per round trip at last estimation. It costs more to protect Trump Tower, where the first lady continues to live in exile, for one day than the amount donated to the Park Service.

The list of bullshit expenses and bleak comparisons go on ad infinitum. There is no way to spin this story to make this gesture look magnanimous or even thoughtful.

If anything, this whole business is probably more of an insult to injury situation. Remember that the NPS was the department that tweeted the comparative sizes of Obama and Trump’s inaugural crowds, something the President was openly peeved about. Now, after proposing to cut their funding by what would in all likelihood be an unrecoverable amount, Trump declares himself a personal supporter of the parks.

If this had happened on House of Cards it might have been a good mid-season episode, hell, it’s exactly the kind of duplicitous antics that make that show fun – but this is reality. A reality where this kind of behavior indicates a derangement and sociopathy that should cause more concern.

This is characteristic behavior for the Trump family in general, who pay fewer taxes than the working poor but distract from that by making huge donations to hospitals and charitable foundations. Much like the donations which have bought Trump goodwill in the past, this too will be tax deductible.

To recap: The very rich President donated an insignificant amount of money to a department which he intends to cut huge amounts of funding for and, to make matters more insulting, he will personally not even suffer the loss of that money as it is partially deductible.

Later in the press conference, Spicer was asked about how the President justified trips to Mar-a-Lago when he criticized Obama extensively over his travel expenditure. The Press Secretary had this to say,    “I would note, ironically, this is a day the president just donated a significant amount of money back to the federal government,” Spicer said. “Respectfully, at what point does he do enough?”

Respectfully, when his actions benefit any cross-section of the American people. When his politics do not leap from one dumpster fire to the next under the paper thin veil of distraction he and his cronies throw up. When he can explain, unaided, why every department except for the military needs to have funding cut from it under his administration. When he can own the failure of his travel bans and reformation of the ACA without citing all the people and forces that conspired against him.

Respectfully, when he can behave consistently and honestly and execute the office with which he is charged without blatant falsehood and megalomania. Until such a time, I recommend Mr. Spicer and the administration keep the antics to a dull roar; they’re doing more harm than good.