Trump Claims The Courts Are Biased Against Him. The Data Shows Otherwise.

Speaking to a Washington D.C. law school in March, it was Attorney General Jeff Sessions who said “activist judges” were to blame for failing to implement to the president’s agenda. However, this sort of Joseph Campbell framing of good vs. evil (or Trump vs. those deep state liberal cucks, rather), in line with the president’s comments that the courts are “broken and unfair,” and just “so political,” really doesn’t hold up to scrutiny.

According to a new investigation from Reuters, statistics show the president’s relationship with the courts is far more nuanced than blind obstructionism. From their analysis of over 41 major court cases involving the White House, results show the president has suffered some courtroom defeats, but he has also been handed some major wins.

If you look purely at the numbers, it appears as though the 28 rulings against Trump far outnumber the 13 in his favor. However, this narrative evens out when you consider there are multiple cases and rulings on the same issue, such as challenges to the repeal of the executive order on Deferred Action for Childhood Arrivals (better known as DACA) and the recent travel ban scandal, both yet to be decided by the Republican-controlled U.S. Supreme Court.

Journalist Andrew Chung also found that most rulings crossed partisan lines, meaning Democratic appointees have served up major Trump victories while Republican counterparts played a hand in significant loses. Both Democratic partisans and MAGA worshippers should know that left-wing appointees, such as Judge Gonzalo Curiel (who is of Hispanic descent) have ruled in favor of the president’s agenda on controversial topics like the construction of the U.S.-Mexico border wall. The report notes others have crossed party lines in decisions to end certain Obamacare subsidy payments and dismissing cases that accuse the president of violating the U.S. Constitution’s anti-corruption emoluments clause.

In December, Judge George B. Daniels, a Clinton-era Democrat, decided to shut down the CREW v. Trump case that alleged the commander-in-chief was receiving money from foreign governments through his various business ventures across the world. Outlined in his 29-page opinion on the case, Judge Daniels sided with the president by saying Citizens for Responsibility and Ethics in Washington (CREW), Restaurant Opportunities Center United (ROCU), among other accusers “failed to show they suffered from Trump’s business practices”, therefore having no grounds to conduct an investigation into money that could lead straight to the White House.

Richard Painter, the vice-chair of CREW and a former ethics lawyer to President George W. Bush, told Mother Jones they haven’t gone away yet. “We disagree with the opinion, and we’re exploring the options for appeal,” Painter told the site. “I think that’s really where we basically are right now.”

The president isn’t in the clear, however. Other Clinton appointees are heading up other emoluments cases, D.C. and Maryland v. Trump and Blumenthal v. Trump, the latter brought about by sitting Sen. Richard Blumenthal (D-Conn.). While one has moved to proceed thanks to Judge Peter Messitte, specifically targeting foreign money from Saudi officials who stayed in the president’s D.C. hotel, the other has experts like Professor Andy Grewal critical about whether broad interpretations of "emoluments" will, once again, have cases looking into possible White House corruption tossed out entirely.

“The fact that he’s lost cases decided by Republican-appointed judges and won cases by Democratic-appointed judges helps to demonstrate that the United States continues to have a highly independent judiciary that bases its rulings on the constitution and law rather than the political leanings of the administration,” William Ross, a professor of law and ethics at Samford University in Birmingham, Alabama, told Reuters.

But how independent will this judiciary remain?

With Trump’s control of the Supreme Court, due to Justice Neil Gorsuch taking the spot of Obama-nominee Merrick Garland, the top court in the country are likely closer to dismissing Hawaii v. Trump, the constitutional challenge to Trump’s third attempt at installing the travel ban.

Thus far, reports indicate the decision will come down to the wire between Justice John Roberts and Justice Anthony Kennedy, the two centrist appointees of the Bush and Reagan era, who will force a divided court to decide whether the constitution grants the president the authority to temporarily shut down immigration from countries proven to have insufficient documentation for vetting.

Axios reports most cases never even make it to the supreme court, meaning a solid 90% of decisions Americans must live with come from the lower courts. This is a problem for the president’s victim narrative since he has already appointed a “record-breaking” number of federal judges, often taking the chance to replace the Democratic appointees who, based on findings, are no reliable foe to the president’s agenda. 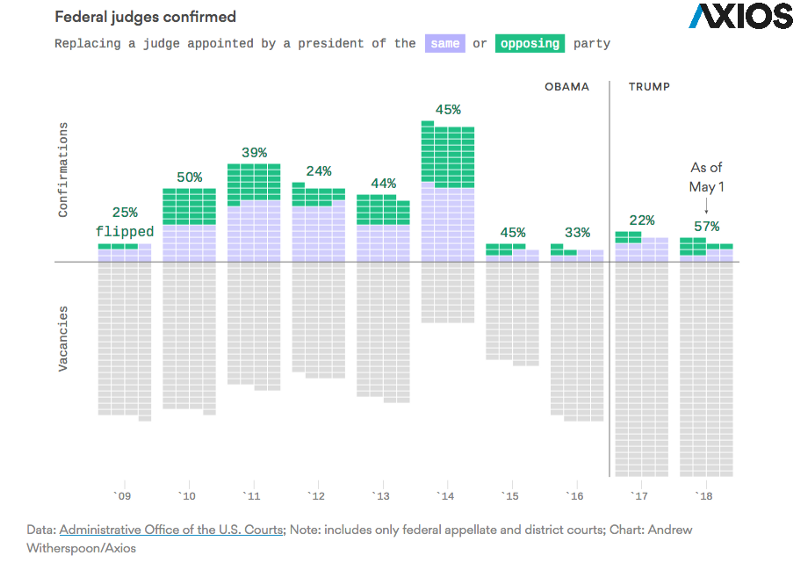 The report shows Congress has confirmed 17 nominees in federal district courts, 16 on the federal appeals courts (the middle-men between normal courts and the supreme court) and there are still 140 more vacancies across both fields. According to Slate, the president already has a list of appointees he plans to install in the upcoming months, showing a judicial red wave is what unites the right-wing to the controversial president currently sitting at 52% disapproval nationally.

All the Republicans need is a simple majority of 51 votes to confirm judicial nominees, using the nuclear option of removing the filibuster to bypass the resistance to their agenda. “They will way outlast most of us,” Sen. Blumenthal told Time Magazine, noting judges have a life tenure where their legacy of decisions will survive longer than the two terms of any given president.

While left-wing social justice warriors may dominate the culture, evidenced in Hollywood, universities and the media establishment, it’s clear Republicans control all branches of government, including the courts, while at the same time appointees are willing to cross partisan lines.

“It’s not the entire judiciary, but I believe that there are some judges who have largely abandoned their role of being neutral arbiters of the law and have become de facto part of the resistance movement,” John Malcolm, an analyst at the conservative think-tank the Heritage Foundation, told Reuters.

Trump is not the only president to have judicial failures and successes. Rather than playing the victim, perhaps examining the broader picture is the best way towards justice reform that remains independent of blind resistance.