Burning bridges is an art form that the current President has taken to a new level. His reflexive impulse to lash out when even warranted criticisms are levied at his doorstep is as predictable as it is destructive. The latest target of his ire is Senate Majority Leader and fellow Republican Mitch McConnell.

McConnell is not a favorite of any conservative sect. Many see him as a somewhat ineffective leader lacking in the strength, wit, or persuasiveness offered by the likes of Paul Ryan and Trey Gowdy. None of this justifies the latest in-party Twitter attack by the President, who once again displayed his skin as thinner than your average geriatric.

The President’s inability to process and maturely respond to criticism levied against him, whether legitimate or contrived, continues to cause rifts within the party and well-founded concerns within his base. Trump’s most hardcore supporters love his combativeness, seeing it as the same behavior that made him their man in the first place, and the behavior that will allow America to be made great again on the global stage. More discerning Republicans understand that there is a huge difference between Trump’s controlled brashness and his off-the-cuff moments of shamefulness.

The “you’d be in jail” debate moment: controlled brashness aimed at a deserving party. Many of his tweets, particularly the recent attacks against allies Jeff Sessions and Mitch McConnell: off-the-cuff Trump at his very worst. The President’s addiction to ad-libbing- against the advice of his most trusted advisors– has undoubtedly done far more harm than good. Worse, it has led even those who reluctantly came aboard the Trump Train, ultimately rejuvenated by his early shows of unity, to question their decision.

The criticism levied by McConnell came at an event he was attending this week in his home state of Kentucky. McConnell reportedly made remarks criticizing “artificial deadlines” put in place by the president with respect to passing a Republican-led healthcare bill. McConnell added this:

“Our new president has of course not been in this line of work before and, I think, had excessive expectations about how quickly things happen in the democratic process,” Mr. McConnell said.

McConnell, of course, is at least partially correct in his assessment. Trump, as he himself espoused countless times on the campaign trail, has not been in this line of work before. And while his sense of urgency has led to many positive developments early in his tenure, it’s clear that he does not understand how slowly the wheels of democracy churn, particularly with the opposition party as entrenched against Trump’s every agenda as they could possibly be.

When it comes to healthcare, many conservatives feel the sense that two separate attempts at repeal and replace in a matter of months was hasty. The development of a bill that would gain the votes of the three dissenting Republican senators, and potentially a Democrat or two, would be ideal. Even if it took a few more months to develop, as McConnell suggested, Obamacare continues to take its toll on Americans. Perhaps McCain and the two female Republican senators would never vote against the bill due to their anti-Trump sentiments. But in a matter of months, the Obamacare situation will be even more dire, and the Republicans would presumably have the increased leverage of a further-exposed Obamacare and a more appealing alternative.

For these reasons, deadlines put in place by the President seem purely arbitrary, and they ultimately contributed to the failure of both bills. And McConnell said as much.

But, in increasingly predictable fashion, the president had a Twitter-response freshly curated in his mind which neither included any sign of personal responsibility nor an ounce of persuasiveness: 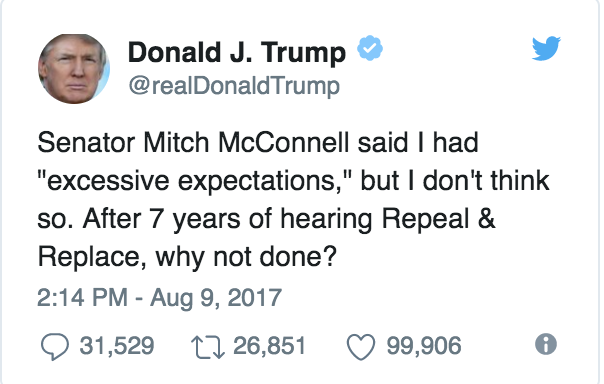 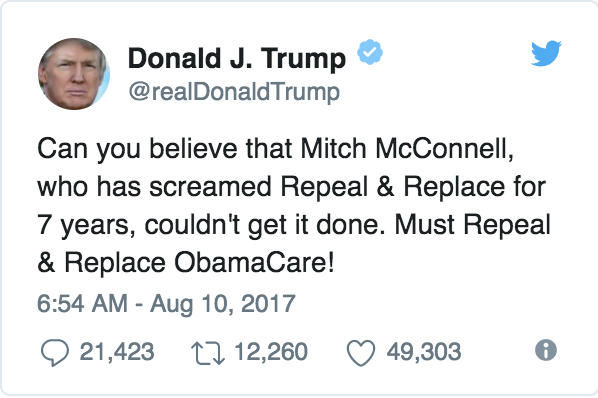 Has President Trump forgotten that Republicans only recently gained a majority in the Senate and that a Democratically-controlled Senate was never going to repeal Obamacare? Citing seven years as a time in which Obamacare should have been repealed is a hollow argument, and therefore not an argument at all.

Further, how is it on Mitch McConnell to foresee the three Republican senators voting against the bill? You could argue that a more persuasive Majority Leader may have been able to convince one or two of those senators to change their minds, but it is unlikely.

And, it was President Trump who sowed the seeds of disdain in John McCain, who has done his part in taking the pettiness to a party-subverting level. Still, Trump is essentially lambasting McConnell for not cleaning up his mess.

Don’t let anybody tell you that this is a sign of strength, vigor, and feistiness from the president who was elected to display such traits. Even the public, one-way spat with Jeff Sessions, for which the president also deserves ample criticism, was not as baseless as his response to McConnell. Sessions at least did something in terms of not answering unambiguously in his confirmation hearing, to earn the President’s scorn. McConnell merely observed a fact: the President is new to this ruling America thing, and he may have come into office with unrealistically high expectations of the Democratic process.

It is a comment that does not attack Trump’s character. It does not blame Trump wholly for Republicans’ inability to pass a replacement healthcare bill. Yet, to Trump, it is nothing short of a character assassination.

And, our president- who has done much good in his time as POTUS – responded as if McConnell were Hillary Clinton. You see, even non-critical comments are reason for the President to throw his most necessary allies under the bus, in this case blaming McConnell for the decisions of three independent-minded Republican senators. There is no room for discernment when it comes to criticizing the president. Republican, Democrat, CNN, Fox News, military dad, or otherwise; you utter a critique of the president, you get the Twitter-roast treatment.

As much as Trump has revived the Republican party in many ways, he continues to step in his own piles of political shit. And worse, he continues to callously and unfairly throw the leaders of his party under the Trump Train.

The question is: how long can a train run over a pile of its own conductors?