Zhu, a 20-year-old University of Michigan student, was appointed to the Women for Trump Coalition Advisory Board.

"I am so excited to now be part of the #WomenforTrump Coalition Advisory Board! Let’s get Trump re-elected for 2020," Zhu wrote. 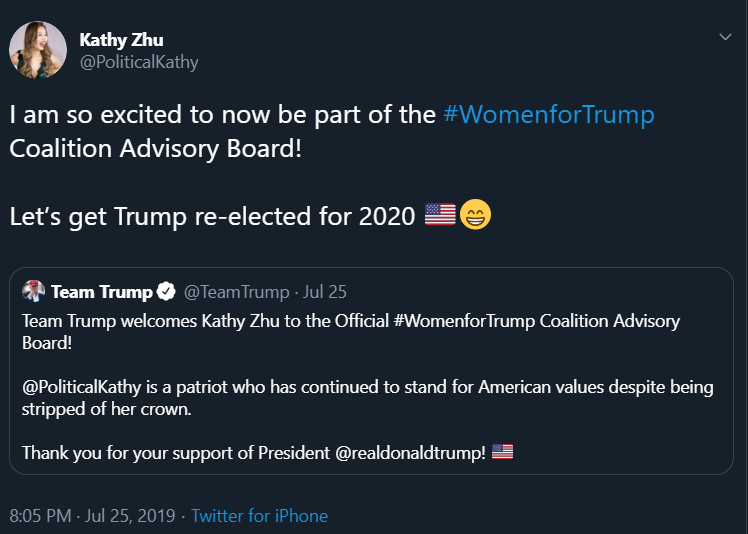 Zhu was crowned Miss Michigan and was a contestant at the Miss World America pageant before her title was revoked because her “social media accounts contain offensive, insensitive and inappropriate content that violate the organization’s rules and conditions,” the organization told her in an email.

Miss World America's State/National/Chief Director accused me of being racist, Islamaphobic, and insensitive.

They stripped me of my Miss Michigan title due to my refusal to try on a hijab in 2018, my tweet about black on black gun violence, and "insensitive" statistical tweets. pic.twitter.com/K1Btho0Pgq

The Orlando Sentinel published screenshots of her tweets. In one tweet, Zhu wrote about the Muslim Student Association at the University of Central Florida offering students hijabs to try on.

“There’s a ‘try a hijab on’ booth at my college campus,” Zhu wrote in February 2018. “So you’re telling me that it’s now just a fashion accessory and not a religious thing? Or are you just trying to get women used to being oppressed under Islam?”

In another tweet about gun violence, Zhu wrote, “Did you know that the majority of black deaths are caused by other blacks? Fix Problems within your own community first before blaming others.”

The tweets have since been deleted.

Miss Michigan Kathy Zhu was recently stripped of her title over several offensive tweets. She is defending her posts criticizing a ‘try a hijab on’ booth at her college and another post in which she responded to a tweet about Black Lives Matter and officer-involved shootings pic.twitter.com/ifaQfCGo7M

Twitter users noted that she has posted numerous other racist tweets in the past.

Here is the rest of the story...looks like they did the right thing.... pic.twitter.com/gqqlrUbJbe

Zhu was the featured speaker at a Women for Trump event in Bloomfield Hills on Sunday, The Detroit Free Press reported.

"It seems harder to come out as a conservative than it does as being gay," Zhu said at the event. "It's not right. Conservative voices are being censored.”

"People wanted to ridicule me," she said. "There were so many times that my account got hacked from the left."

Despite deleting the tweets, Zhu said she stands by everything on her Twitter feed.