The shockwaves of the Trump presidency have been more wide-reaching and persisting than most could have predicted. The democratic election of one man has seemingly altered the way in which the civilized world views such fundamental concepts as criminality, evidence, objectivity, principle, character, and fact.

Most of these words and the ideas that they denote have a fixed definition which assures that no person may substantially misrepresent them while being taken seriously. One term from this lot, however, has proven particularly volatile to the seismic rifts caused by the 2016 election, having been distorted to the point that it is nearly beyond true definition: objectivity.

The concept of objectivity has always been inherently impaired. Every person’s vision is shrouded with biases which we are more or less conscious of. In the era of Trump-mania, biases have been exaggerated, in many cases willfully, to the point where the lines in the sand which define ‘objectivity’ have been all but washed away by the flood of biased thinking and reporting.

One side has stretched the art of demonization past its known limits, verbally denouncing “fascism” and the rebirth of the Third Reich while employing violent tactics to silence opposing thought in a manner which the Fuhrer would be proud of.

In what appears to be a phenomenon that is part reactionary, part wishful thinking, and partly motivated by a genuine sense of patriotism and renewed hope in conservatism, many Trump supporters are guilty of losing sight of what it means to be objective, as well. I know that I have written off countless Trump-related headlines as fantastical, partisan smear jobs not worthy of the slightest consideration. I am guilty of diminished objectivity, though I feel I am far from the worst offenders in this respect.

This has, admittedly, impeded me from engaging in a deep dive examining Trump’s flaws- he is human, after all- and how they may have played a role in his leadership to date.

I maintain that Donald Trump’s election marks a significantly positive and necessary re-directing of the United States’ priority list, even if only for four years. The fruits of the election results will eventually be undeniable, in my opinion, especially when the alternative vision for America is considered. However, the abandonment of all objectivity and self-reflection by those who oppose this view of national optimism does not justify a move toward blind partisanship as a reaction.

Fortunately, the ever-skeptical Ben Shapiro penned a piece for the National Review which makes some connections between Trump the man and Trump the leader. Importantly, he explores how those who have come to support Trump have either rationalized, rejected, or prayed for an immaculate exorcism of the man’s more obvious flaws. Shapiro also illustrates the ways in which these deep-seated flaws have manifested themselves in the President’s failures and other less-than-successful decisions.

As is typical of Shapiro, he makes it difficult to materially disagree with his assessments, with a couple of exceptions.

Here is his basic premise, summarized: Donald Trump is a flawed man and therefore a flawed leader, and his supporters, in a mold ironically similar to Bill Clinton’s, have largely shifted the parameters of acceptable “character” for a President to accommodate their candidate. Ultimately, this granting of leeway in terms of a President’s personal life will and has reared itself within the man’s leadership style.

As evidence, Shapiro presents a few scenarios which, in his mind, exemplify the character flaws which seemingly evaporated from many conservatives’ minds once Trump the candidate became Trump the likely nominee (looking at myself, here).

Shapiro attributes Trump’s firing of James Comey- a move he acknowledges was months overdue- to Comey’s refusal to seriously investigate allegations that Barack Obama had ordered “wiretapping” of the incoming President Trump. Firing Comey because of his refusal to acknowledge the legitimacy of Trump’s claims, Shapiro posits, exposes one of Trump’s deepest flaws: vanity.

Trump’s vanity is something that even his most ardent supporters cannot deny. This flaw does not necessarily denote a poor leader. We all have a little vanity in us, after all.

But, as Shapiro suggests, vanity and the overall sensitivity that lies at the core of this trait helps to explain Trump’s need to be liked by all. It helps us understand his hyper-awareness of critics, and apparent need to justify his every move, often via Twitter. 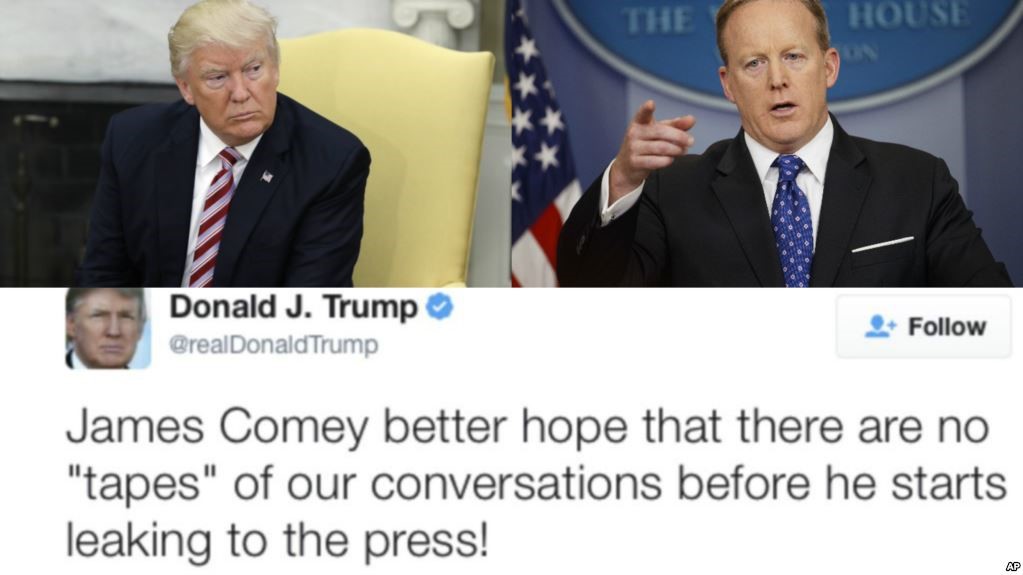 Trump supporters, and I believe even posturing Democrats, are well aware of the many reasons why James Comey needed to go. There is no need to hint at the potential recording of conversations between him and the former FBI director. If there are indeed recordings, and Comey does in fact leak falsehoods to the press, the tapes serve as irrefutable evidence of Trump’s impunity. If caught lying on record, Comey’s credibility, and therefore the storyline that he was invaluable and impartial in the investigation of a Trump-Putin connection, would be eviscerated. It would be the ultimate victory, playing the long game.

But, the President cannot help but hop on Twitter to overplay his hand in what seems to be the most useless of ways. If tapes of their conversations exist, Trump showed Comey the rabbit before even breaking out the hat. It is truly a perplexing move. If there are recordings, and Trump knows that what was said will not reflect poorly upon himself, then he missed an opportunity to potentially expose Comey as a liar, further justifying his decision to fire the man.

If there are no tapes at all, Trump may be trying to cast doubt upon Comey’s character by painting him as a likely turncoat. But, he may also be actively trying to deter Comey from disseminating false information about their conversations. These rationales make some sense, but the fact remains: President Trump’s seemingly compulsive need to justify moves that are plainly justifiable speaks to his deeper need to be loved. The need to announce such a taunt on Twitter speak to his incessant and immediate need to appear right, damaging his image for even the smallest of perceived victories.

Here, Shapiro seems to make a clear link between one of Trump’s well-known flaws as a man and their manifestation in a leader.

The fact that so many conservatives are willing to ignore the warts that come with such an obviously imperfect president is surely due to the hyperbolic outrage that has come with his election. He’s not perfect, but after all, he’s not them.

We have also allowed ourselves to overlook our guy’s flaws because we know that he is flawed, but we want him to do well anyway. To deny his imperfection is crazy. We’re not progressives; we at least acknowledge basic realities. Most of us understand that Donald Trump’s affair with Marla Maples, as well as the tape that launched a million “pussy hats” are not President-resume material.

This tape typifies the Slick Willy-fication of presidential standards, only among the conservative party this time around:

I get it, the circumstances were different this time. No candidate has ever been as sleazy, as publically corrupt as Hillary Clinton. We had one choice. But let’s not pretend he’s Reagan. Let’s be honest with ourselves about the fallibility of even the men we depend on the most.

Shapiro tends to hurt his argument, in my opinion, by using hyperbolic and unfit references comparing Trump to the likes of Paris Hilton, adding that Donald was gifted much of his initial wealth and has personally “underperformed the real-estate market.” Shapiro suggests Trump was not subjected to the standards of a true meritocracy because he is an entertainment figure. But comparing Donald’s life work to a pro floozy?

Still, the core of Shapiro’s gripes with Trump hold true:

“Trump is an entertainer. He acts like an entertainer. He obsesses about his ratings, he spends hours on his hair, he agonizes over public perceptions of his successes and failures. He cannot bear to be out of the spotlight, and he feels personally threatened by those who occupy it more than he does for any period of time.”

The character facets that go with this love of the spotlight can be positive. Trump has proven that the imposing, uncompromising image that he honed on his television show, The Apprentice, has proven helpful in dealing with world leaders, both in words and action. Syria found out recently that Trump is not one for bluffing.

On the other hand, Trump’s true personality, the one that lends itself to entertainment and the popularity that entertainers desire, has some obvious pitfalls:

“Trump’s flaws, however, differ from Clinton’s. He has the same need for love from the world at large — a love that drove Clinton away from ideology and toward a governing centrism, and which will likely move Trump in the same direction.”

While the opposition party in Trump’s case is not nearly as willing to cooperate as the Republicans were under Clinton, a move toward centrism based upon a desire to be more liked is far from absurd. Trump knows, and has publicly acknowledged many times, that he is not going to get a fair shake from most of his opponents. Hopefully, he won’t even try.

But one’s true nature is almost always impossible to shake, and only time will tell if Trump’s promises precede the desire to have as many admirers as possible. He should know that any ideological move toward the modern Democratic party means a step toward insanity, surely eroding the support that got him elected.

Even when he has the best of intentions, sometimes Trump cannot help but act too quickly, often to his own detriment, as Shapiro notes:

“he’s also spontaneous where Clinton was calculating, which means he makes more unforced errors; Trump hates details whereas Clinton loved them, which means Clinton was fluent with his policy proposals. None of this cuts in favor of Trump’s success.”*

*See: the confusion of the travel moratorium, the overly simplistic rollouts of health care and tax bills.

To be fair, I have agreed with the spirit of most of Trump’s moves thus far. From maintaining a firm stance on Syria, to conceptualizing a simplified tax plan, to firing that People Magazine-reading incompetent James Comey, he’s on the right track.

So, for now, conservatives are left with three options: 1) pray for the President’s flaws to go away or be suppressed, allowing the Trump agenda to proceed further, a la Paul Ryan 2) call out Trump out when he errs, and 3) sycophantically support without criticizing.

I, for one, am going to stick with number 2 and perhaps the channeling of number 1 with a bit of finger crossing.