Stephen Miller Tells Us to Stop Questioning the President

This is one of those rare cases where a meme is funny simply because it’s true. Honestly, I’ve found myself tuning out of current events this week not just because I’m fighting a cold, but because I need to just maintain my own sanity a bit. If you respect science, facts, or wish for some semblance of truth and honesty, it’s exhausting hearing about what outrageous claims the White House is making lately. If you thought the travel ban was the pinnacle of idiocy from this administration, you’re wrong. 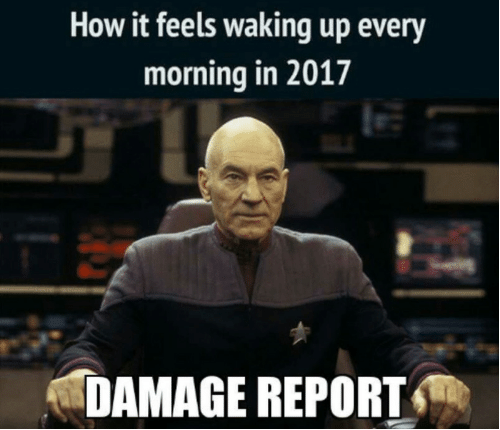 One of President Donald Trump’s senior advisers used a Sunday television appearance this week to repeat rigged voting nonsense that “thousands” of people illegally voted in New Hampshire back in November. Originally voiced by Trump himself in a meeting with senators, it appears that adviser Stephen Miller has been drinking from the Trump kool-aid and wanted to emphasize this ridiculous claim, despite the fact that Trump and his camp have yet to present anything to the Federal Electoral Commissioner’s request for evidence. On ABC, Miller told presenter George Stephanopoulos:

“I can tell you that this issue, of busing voters into New Hampshire, is widely known by anyone who’s worked in New Hampshire politics. It’s very real, it’s very serious. This morning, on this show, is not the venue for me to lay out all the evidence, but I can tell you this: voter fraud is a serious problem in this country. You have millions of people who are registered in two states, or who are dead who are registered to vote, and you have 14% of non-citizens, according to academic research, at a minimum, are registered to vote.”

When repeatedly pressed by Stephanopoulos, Miller dodged all inquiries of evidence, saying, “The White House has provided enormous evidence.”

That’s a lie. The only thing the White House has provided evidence of is that we’re quickly losing all semblance of democracy, intelligence, and respect on the global stage.

Trump, praising someone? Oh, he did. Why? Because robot-Miller finally stated in plain words what Trump has been dancing around for weeks. Chatting with John Dickerson on Face the Nation, Miller expanded upon Trump’s views on judges stepping in to protect the Constitution and immigration.

“I think that it’s been an important reminder to all Americans that we have a judiciary that has taken far too much power and become, in many cases, a supreme branch of government. One elected judge in Seattle cannot remake laws for the entire country. I mean this is just crazy, John, the idea that you have a judge in Seattle say that a foreign national living in Libya has an effective right to enter the United States is - is - is beyond anything we’ve ever seen before. The end result of this, though, is that our opponents, the media and the whole world will soon see as we begin to take further actions, that the powers of the president to protect our country are very substantial and will not be questioned.”

Let’s highlight that again for the idiots in the back: “the powers of the president to protect our country are very substantial and will not be questioned.” Just when you think it can’t possibly get worse, it does. When Stephen Bannon called the media the “opposition party” which should “keep its mouth shut,” I thought people would be disturbed. When White House Press Secretary Sean Spicer got caught in repeated lies, I thought there would be repercussions for him (spoiler: there aren’t). And when Kellyanne Conway called for political analysts and journalists to be fired for criticizing Trump, I was positive people would be up in arms. But apparently this is just another day in the Trump administration: a senior adviser lays out a blatant threat and ode to a fascist government, and no one bats an eye.

What is going on?

Karl Sharro’s open letter to America is no longer all that funny to me, because the US really does look like an Arab country. When you have a minute, read the letter, because you’ll laugh and then get really sad.

“Another crucial aspect to this transformation is the president’s contemptuous attitude towards the media. My, the delightful similarities. From blaming the press for engaging in secret conspiracies to undermine him to threatening their access to his White House palace to refusing to take questions from certain reporters, President Trump reminds us of several of our own leaders. In fact, an Arab leader complaining about CNN coverage is pretty much a staple of our political life...We are waiting to see how exactly President Trump plans to deal with the intrusions of the meddling and irksome press. So far, he reminds us of Turkey’s President Recep Tayyip Erdogan, who perhaps more than any other leader has been leading the movement to put the press back in its place. Will he continue to follow Mr. Erdogan’s example of gradually diluting the freedom of the press or will he choose the Arab approach and replace the entire media with one or two state media organs?”

I wouldn’t put it past Trump and Bannon. Bannon’s Breitbart already accuses every other media outlet or website of spreading misinformation, and Trump cries fake news every time a new trending topic appears. Frankly, the Trump administration’s behaviors are disgraceful. They are constantly lying through their teeth, so I suppose it makes sense that they want to call into question anything that opposes their ‘alternative facts.' It’s only a matter of time before they start their own outlets to ensure a constant loop of their talking points.

Pretty much daily now, something happens in Trump’s American that screams, “THIS IS NOT NORMAL!” But dead-eyed Miller telling people not to question the president is the disgusting last straw for me.

Trump, his policies, and all his cronies will be questioned, Mr. Miller. The incessant lying, the unnecessary personal demeaning of opponents as opposed to mature responses, is wrong. It’s a privilege to have a platform and a voice. When I see Trump tweeting false information with the sole purpose of scaring Americans into trusting him, I’m going to say something. And when I see someone like Miller, Conway, or any of Trump’s other flying monkeys shamelessly repeating talking points that have repeatedly been proven false, I’m going to write something. I’m not going to listen to the people who say, “Give it a rest, Trump won.” Hey, I’m not arguing that he didn’t win. I’m arguing that we need to shove facts, science, and logic into the faces of these pathological liars.

What I write matters little in the grand scheme of the direction Trump is steering our beautiful country. I’m just another voice in the chorus of fact-advocates out here, trying to make the public understand. But if I can get even one person to wake up and realize the horror that is the Trump administration, then I’ll take it. President Trump and his camp need to find the moral fortitude to conduct themselves with a modicum of honesty, to ground their policy decisions in facts, and to stop ignoring the Americans they’re supposed to represent. Until they do, I’m not shutting up. And neither should you.