Over the last several months, protesters at the Standing Rock Reservation in North Dakota have experienced violence from militarized police. This week leading up to Thanksgiving, police in Morton County have demonstrated a new level of savage violence to citizens exercising their First Amendment rights. 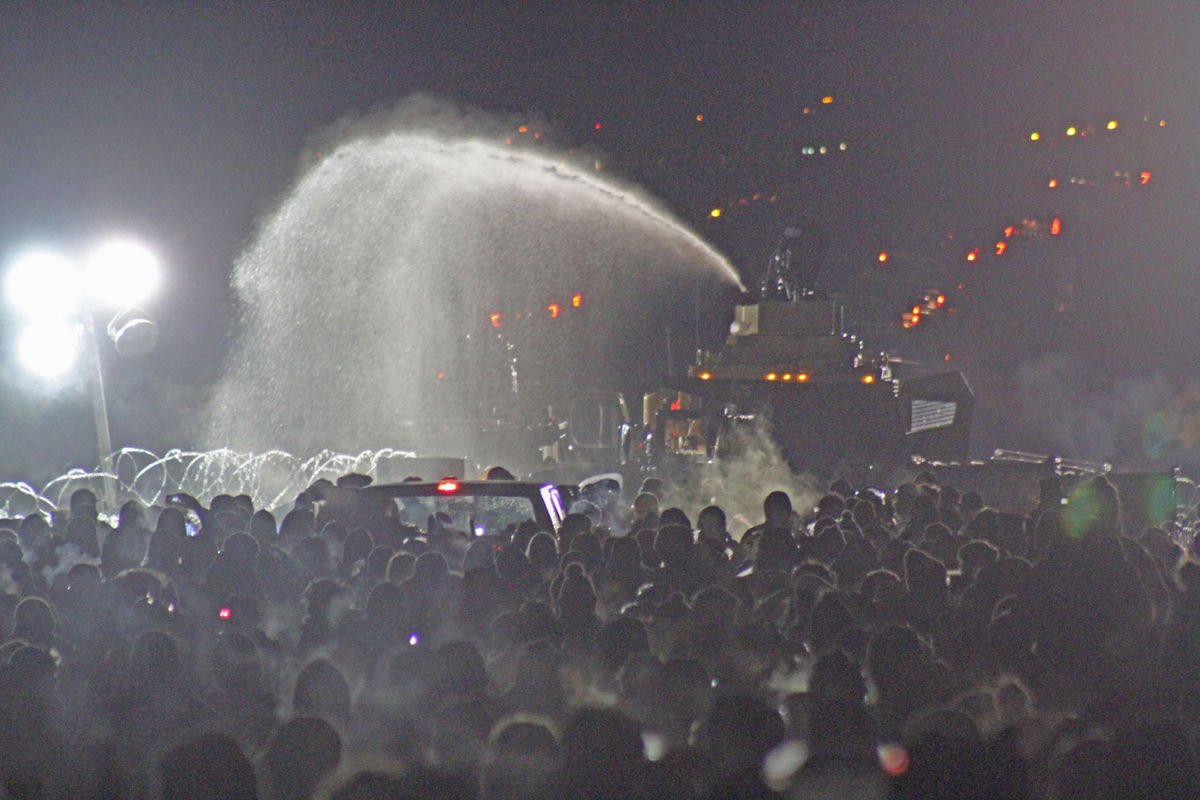 There has been relatively little commentary and coverage in mainstream media, but not too long ago we offered a basic overview to understanding how and why these protests began. In light of the escalating brutality of the last few days, we need to stop sugarcoating the truth now: police officers are torturing protesters at Standing Rock.

There have been reports of ongoing violence and unfounded arrests for months, but on Sunday, the police escalated their state-sponsored violence to a new level. In 23°F weather, they deployed water cannons against the estimated 400 protesters gathered on the Backwater Bridge, one of the main sites of the protest. According to their statement late Sunday, the police claimed they were using the water to extinguish fires set by the protesters, and a police officer was allegedly attacked, although the only proof they provided was a random rock in their evidence photos.

Backwater Bridge has been closed since the end of October, after a particularly violent clash between the police and water protectors (as the protesters prefer to be called) occurred after police raided their camps and arrested hundreds, ending in 140 indictments and two vehicles set on fire. The confrontation on Sunday began after water protectors attempted to remove a truck that had been on the bridge since then, as it blocks emergency access to the reservation and has been used a way to lock in the water protectors. Police claim that not only were rocks thrown, but burning logs were hurled at them. In reality, water protectors were simply starting small fires to keep themselves warm. The whole situation is ripe with irony, as Sheriff Kirchmeier from the Morton County Sheriff’s Department- seen as the director of the police response to these protests- had urged protesters to leave their camps because they were unfamiliar with the harsh North Dakota winters. Using freezing water as a weapon against “water protectors” is not lost on anyone either.

Obviously, a handful of fires lit to keep people warm is enough of a threat that it requires over six hours of soaking large groups of people in subzero temperatures. That’s clearly the best course of action. What’s even more ridiculous than that line of thinking is the way the police attempted to explain and justify the situation. A statement from Honnell Hushka, a spokeswoman for the Morton County Sheriff’s Department, says:

“There were multiple fires being set by protesters on the bridge and in the area of the bridge. We have fire trucks on the scene and they are using their fire hoses to put out the fires, set the land around so fires don’t spread, and they are also using water as crowd control.”

The crowd control afterthought tacked onto the ending is just awe-inspiring in its disregard. It makes me wonder how naive they believe the public is.

Dallas Goldtooth from the Indigenous Environmental Network said on Monday that the Oceti Sakowin medical team - who has been working together with the Standing Rock Sioux tribe - have reported that nearly 200 people were injured that night, with 17 people hospitalized for head injuries. Those head injuries were sustained from police purposefully aiming for people’s heads.

Possibly one of the most disturbing of injuries is that of Sophia Wilansky, a 21-year-old protester who was struck by a concussion grenade. She joined the pipeline protest three weeks ago and was bringing water to fellow activists when police started hurling projectiles at the group. According to her father, Wayne Wilansky, she tried to protect herself with one of the improvised shields the group had, but as it fell and as she tried to grab it, the police shot her with a rubber bullet. As she struggled to get up and retreat, they threw a grenade at her. The force of the explosion destroyed the bones in her arm, all the arteries, and the majority of the muscles. Even more sickening, eyewitnesses report that they saw men get out of the nearby armored vehicle labeled Stutsman County (officers sent to support the Morton County Sheriff’s Department) laughing after the explosion. According to Alonzo Willis, who helped carry Wilansky away from the tear gas attack that immediately followed, one of these men said, “That was a beautiful shot.” 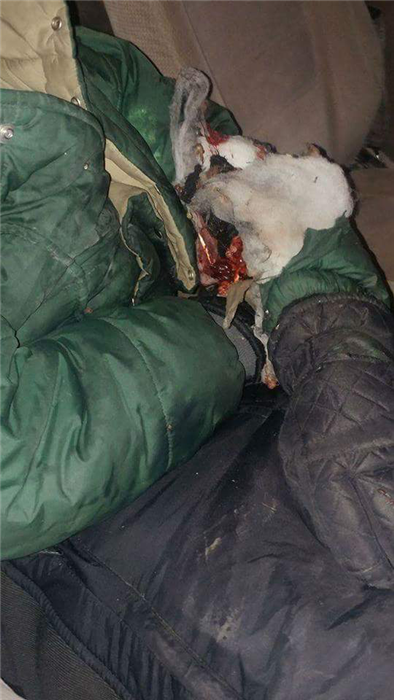 After controversy exploded online regarding Wilansky, the sheriff’s department denied using concussion grenades and suggested the injury was caused by explosive devices used by protesters. They stand by their statement, despite an official response from the Medic and Healer Council, who said the following:

“These statements are refuted by Sophia’s testimony [and] by several eyewitnesses who watched police intentionally throw concussion grenades at unarmed people, by the lack of charring of flesh at the wound site, and by the grenade pieces that have been removed from her arm in surgery and will be saved for legal proceedings.”

According to Wayne Wilansky, there were FBI agents on site at the hospital who gathered his daughter’s clothing and cell phone for “evidence.” No announcement of a formal investigation has occurred.

Want to know why? The FBI and local law enforcement involved are in these attacks, and both are funded by the government. That’s right: who’s paying for all these assaults? You are.

Officers from at least five different states (North Dakota, South Dakota, Minnesota, Wyoming, Nebraska) have been brought in to “manage” the situation with taxpayer money. I suppose when representatives from over 300 tribes join what simply began as a prayer circle, I’d be a little nervous too. This uprising has been joined by climate and social justice activists as well, as the pipelines current path runs within less than one mile of the Standing Rock Sioux Tribe’s reservation, endangering water supply and sacred cultural sites. 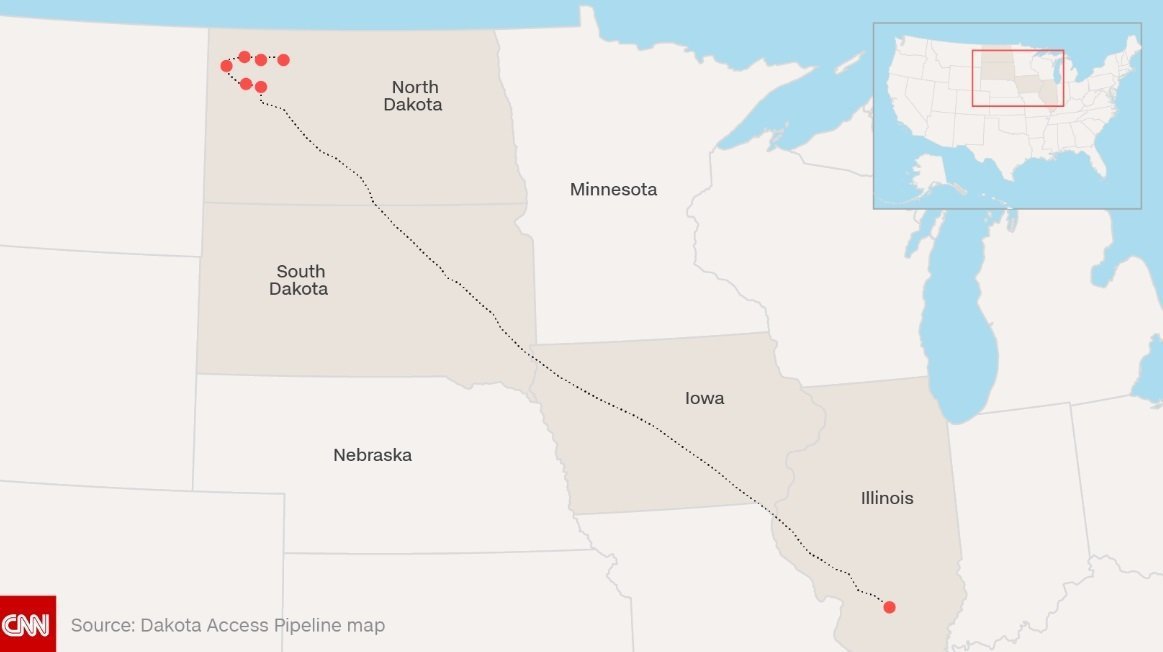 This protest invokes a long, brutal history of Native American dispossession, and highlights the elevation of private and corporate rights over individuals and indigenous people. It also directly contradicts efforts to curb fossil fuel dependency to combat climate change, yet the North Dakota lawmakers asked for federal law enforcement to help police control the protests. As of Monday, Sheriff Kirchmeier confirmed that the U.S. Customs and Border Protection would be providing some agents to help the highway patrol rangers and officers already there. The cost of these additional agents is currently unknown, but as of writing this article, the state Emergency Services spokeswoman Cicily Fong told reporters that protester policing costs are currently at $11.8 million. They will be seeking another $7 million in borrowing on Nov 30 on top of the $10 million borrowed earlier this year. Morton County records show they have spent more than $8 million themselves, and have implied they may be applying for state reimbursement as well.

With arrests totaling 528 since August and costs continuing to climb, Energy Transfer Partners (ETP) still insist on continuing construction. The Army Corps of Engineers announced a delay in construction work to hold further discussion and analysis, yet they continue to push for the infrastructure to be built without the final approvals. They are using the police as their personal security without any regard for the rights of the people protesting.

Combine the water cannons with the tear gas, pepper spray, tasers, beanbag rounds, tanks, and rubber bullets being used against unarmed people, and how can you call this anything but armed suppression? If this happened in a developing country, Americans would be up in arms about the injustice and abuse. Why are we so quiet now?

Claims and accusations are being made on both sides. You can believe whomever you wish, whether you think the water protectors are in the wrong or the police. If you believe the police allegations are the truth, though, what justifies this escalation of violence against unarmed individuals exercising their First Amendment rights? Rights are intangible ideas that are immovable and moral. We don’t get to decide if they’re conditional, that it’s suddenly okay for people in authority to turn on a group of unarmed individuals. These are not innocent decisions, where human rights violations have been accidental. Spraying water in freezing temperatures, shooting rubber bullets at heads, throwing grenades and using chemical sprays are intentional choices- or the people in charge are just too fucking stupid to realize the serious repercussions of their actions. Either way, none of this is acceptable.