So, How Did the 2020 Pollsters Get the Election Wrong Again?

If you paid any attention to the 2020 election news media, you were probably aware of the overwhelming expectation that now President-elect Joe Biden and the Democratic Party would sweep the election. As proof, many looked to outlets like FiveThirtyEight, once considered the most respected poll aggregator in federal politics, who projected the party had about a 75 in 100 chance of holding the House and retaking the Senate in addition to an 89 in 100 chance of winning the White House. In the aftermath, however, many pollsters have been left answering questions.

In reality, this was a much closer race than expected. It was the Democrats who lost eight seats in the House, gained a single seat in the Senate, and barely knocked out President Trump in the electoral college. This resulted in a 7% average drop between the national polls and the popular vote as well as a 6% average drop between state polls to actual vote outcomes in key battleground areas such as Michigan and Wisconsin where Biden was seemingly the clear favourite, according to the comparisons made by RealClearPolitics.

It gets even worse from looking at both the aggregates and the individual polls. In Wisconsin, for example, FiveThirtyEight’s averages gave the state to Biden over Trump by an easy 8.4 percentage points. These included decisive margins from mainstream outlets which estimated 11% (New York Times), 10% (Reuters) or 8% (across CNN, CNBC and Emerson Polling), whereas the smaller outlets projected it much closer by as low as 3% (Susquehanna) and 1% (Trafalgar Group). It turns out Biden only won the state by the skin of his teeth with an incredibly narrow 0.63% margin. In Michigan, you can see this same overconfidence in projections at 7% across CNBC, Emerson and Mitchell Research, whereas Biden saw yet another narrow 2.8% win.

These issues trickled down into Congressional races too. Controversial Sen. Susan Collins of Maine did not lead in a single poll released during the final four months of her re-election campaign. And yet the Republican won her race comfortably. At the same time, Biden was projected to win Maine’s second district by 3%, yet Trump won it by over 7%. Republican Sen Thom Tillis of North Carolina was the underdog in almost every poll heading into the 2020 race. He won as well. Biden was projected to win the state by 3%, Trump won by 1%. Trump’s strength echoed across, Iowa, Florida, Texas, and other areas where Democrats were expected or at least competitive enough to win.

Did Joe Biden himself win the presidency? Clearly, yes. The projections weren’t wrong on the overall winner. Was this a landslide in the making? Or even a strong performance for Democrats? Clearly not, and everyone is left asking why? And at what cost was this election in his favour? When faced with this growing sentiment, the pollsters are already retrying their regular tricks of avoiding criticisms of irregularity. We’re told time and time again that the polls actually “weren’t as wrong as you think” since their work is merely a “snapshot in time,” both of which were stated earlier this week by “expert pollster” H. Stuart Elway for Crosscut. And in some cases, this is a perfectly legitimate point.

If you’re comparing a January poll to a November election, for instance, especially in the aftermath of a national disaster like a pandemic which killed over 250K people, there’s just no comparison to be made. Political science has no silver bullet in predicting the future in such matters. Yet these ‘snapshots’ I showcased were taken exactly within the span of a week or even days before the election on November 3rd. And there weren’t any prominent interventions from Wikileaks, Russian hackers or Comey letters to make up for the supposed Trump deficit. Not even another grand October-November surprise could flip tens of thousands of votes from the polls to the voting booth seemingly overnight.

So did the pollsters happen to miss something? Or is it just that everyone else got it wrong instead? Accounting for all the facts, Occam’s razor makes that overly complex narrative bleed cold. “For now, there is no easy excuse,” confessed polling journalist Nate Cohn for The New York Times. “After 2016, pollsters arrived at plausible explanations for why surveys had systematically underestimated Mr. Trump in the battleground states. One was that state polls didn’t properly weight respondents without a college degree. Another was that there were factors beyond the scope of polling, like the large number of undecided voters who appeared to break sharply to Mr. Trump in the final stretch.”

“This year,” he continued, “there seemed to be less cause for concern: In 2020, most state polls were weighted by education, and there were far fewer undecided voters. But in the end, the polling error in states was virtually identical to the miss from 2016, despite the steps taken to fix things. The Upshot’s handy ‘If the polls were as wrong as they were in 2016’ chart turned out to be more useful than expected, and it nailed Joe Biden’s one-point-or-less leads in Pennsylvania, Georgia and Arizona. The polls were off in 2020 in almost the same ways they were off in 2016.” Cohn even states national polls were worse now than four years ago, as most polls had Hillary Clinton winning the popular vote by 3%, which in actuality came out at 2.1%. This year, however, Biden was on track to win 10%, and yet looks to end up at around 3.7%.

There is just no easy excuse. 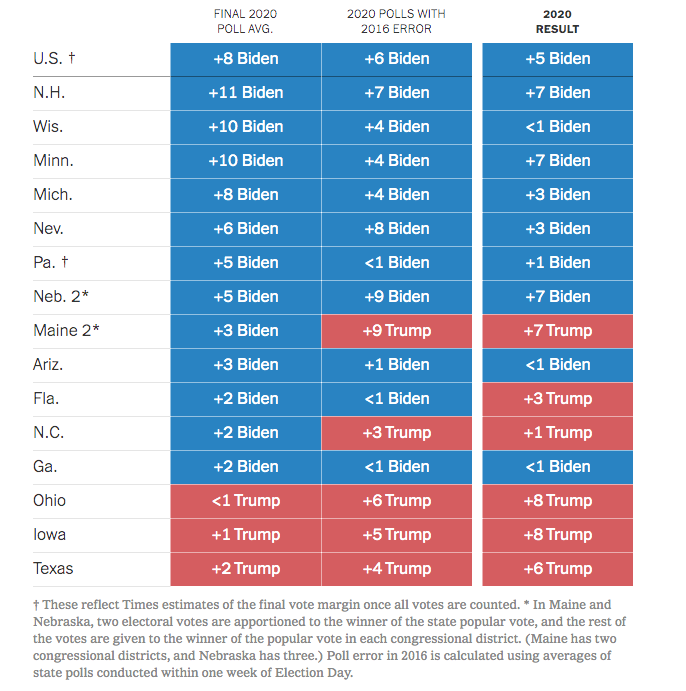 So what went wrong? Currently, political scientists are conducting their own poll post-mortems looking at multiple angles. There’s the elephant in the room known as COVID which could have led to drop-offs in turnout. There’s the fact that election day isn’t a holiday, leaving those who could vote potentially unable to do so if they did not vote early. Speaking of voting early, Republicans had taken steps in areas such as Texas and Wisconsin to gut the post-office to disenfranchise voters, attempting to dismiss all votes which arrived late yet were post-marked before the election.

A new rising cause among pollsters is whether Republican-leaning voters are unwilling or unable to answer polls. This problem — different from the narrative of “shy Trump voters” lying to pollsters — does indeed match Trump’s years-long rhetoric on telling supporters not to trust the media. “I think when all the votes are counted, what we are going to see is a far smaller polling error, potentially even minimal, in many of the states where the presidential was competitive,” said Jefrey Pollock, a Democratic pollster and president of the Global Strategy Group.“As professionals, we have to question whether a segment of the electorate has opted out of talking to us.”

In addition to all those obstacles, are pollsters stuck in the traps of egotistical benchmarking? There is the old saying that “bad data is actually worse than no data because it leads the organization to pursue the wrong goals, move in the wrong direction or at minimum, wastes resources.”

And in the area of polling, why should they? If the experts’ response to the “non-response bias” of Trump voters is to also turn their backs on the problem, whether willfully or not, that does not mean the problem is simply not there. It must be accounted for one way or another, or you’ll be perpetually locked out of the Republican echo-chamber and will be unable to gauge the thoughts and opinions of these voters.

“I think our polls would have been even worse this year had we employed a pre-2016 methodology,” added Nick Gourevitch, another member of the Global Strategy Group who said not to underestimate Trump’s chances. “These things helped make our data more conservative, though clearly, they were not enough on their own to solve the problem.”As the country grows more fragile by the day, experts should heed Gourevitch’s words and brace for impact.