The kind of anger and vitriol coming from the left these days really seems to defy belief.

Just a cursory browse through the social media from leftist groups or individuals would make you think they are the posts of crazy people. They reject any kind of basic facts and logic, simply to rant and rave. Their hatred of President Trump is so extreme, even the most rational person would fear that all SJW’s are violent extremists.

Now is the point when many of you will rush to your keyboards and write, “Conservatives did the same thing with Obama!” As I’ve written in the past: that’s not an argument. You cannot justify bad behavior by saying someone else does it. Plus, I never saw a conservative do this: 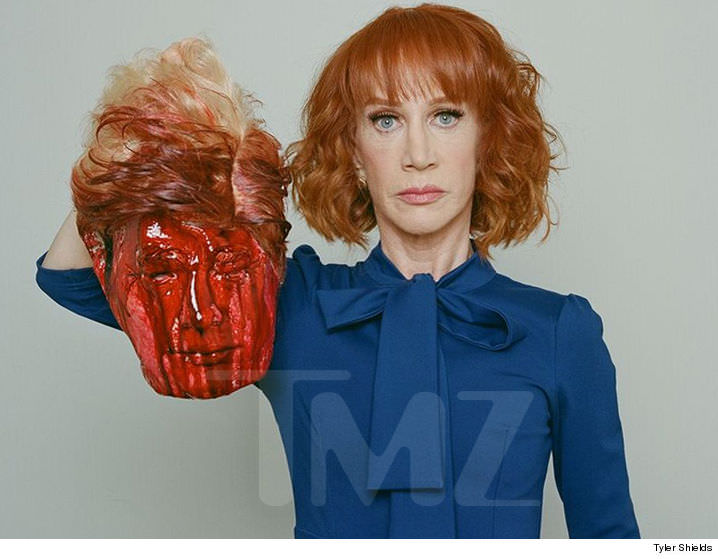 Old news, I know. But just because Griffin’s career’s gone the way of the dinosaurs, doesn’t mean the hate that fueled that photo isn’t still brewing among lefties.

You can say there are right wingers just as bad, but I don’t speak for them. I speak for common sense, decency, and American values and traditions. I speak for myself and the many Americans who want to see our country thrive.

While there have always been radical people on the right, we see more and more mainline liberals embrace the craziness. A lot of attention has been paid recently to one Kevin Allred, a bizarre social justice warrior who recently lost his job. Of course, he was a college professor—of Gender Studies. It seems like the only jobs suited for this clutch of society involve sitting in comfortable classrooms and blathering at impressionable students.

I’d like to see these people actually work for a living. But I digress.

Kevin Allred was recently fired from Montclair State University for some shocking tweets about the POTUS. Of course, he is blaming the “Trump trolls” for his tragic turn of fortune. But they weren’t the ones that tweeted: “If I see any Trump bumper stickers on the road today, my brakes will go out and I’ll run you off the road.”

Nor did they tweet: “Trump is a fucking joke. This is all a sham. I wish someone would just shoot him outright.” But no, Kevin. It was all the trolls that got you in trouble.

It seems like social justice warriors write themselves a blank check for their bad behavior. It’s justifiable, because they’re the ones that are right, right? I mean, Allred’s justified in his hatred for Trump, because Trump’s such a bad guy. So he can threaten the man all he wants.

Forget about open and honest discourse, agreeing to disagree, and basic human decency.

Trump and his ilk are Nazi’s. So it’s okay for you to attack them. Even call for their deaths.

Yet social justice warriors are wonderfully ignorant of the facts. They put emotions over truth, hysteria over proof. Such was the case with Allred’s other tweets (via Daily Wire):

Trump has threatened:
-the people of NYC (anyone on 5th ave)
-Hillary Clinton
-anyone approached by police
when will FBI investigate this?

not to mention the millions of Americans he's hell bent on stripping health insurance from. he wants Americans dead.

So Trump’s “hell bent” on taking away health insurance from Americans? He wants Americans dead!? I guess Allred didn’t bother to listen to Trump’s address to the Joint Sessions of Congress, where he laid out his plans to provide a better alternative to Obamacare. Or the basic fact that Obamacare is an utter failure, which will leave thousands of counties without providers.

But no, Trump wants Americans dead. Because this social justice warrior says so.

It’s this kind of irrational stupidity that’s infecting much of the left today. They are butthurt over their loss. I get it. They don’t like the fact that Republicans control much of our country. Sure, that stings.

But to continue this tirade of empty hatred, fueled by nothing more than hurt feelings, is utterly pathetic.

Social justice warriors’ goals are nebulous. They claim to fight for equality. Or to right the wrongs of our society. But more often than not, they attack people they just don’t like. Reasonable conversation with an SJW is impossible. You either kowtow to their views, or you’re branded a racist, Nazi, sexist, or whatever new slur they have.

I once saw my Hispanic friend branded a fascist, simply for not taking one of their fliers.

If you dare to question their toxic rhetoric, they will turn on you. It doesn't matter if you’re black, gay, man or woman. You either march to their drumbeat, or you’re the enemy.

Which is why I find it so refreshing to see a few based celebrities coming at them.

William Shatner, the legendary actor who made Captain Kirk a household name, has stirred up yet more leftist outrage on Twitter. The 86-year-old has made clear in the past that he's not a fan of social justice warriors, and when he pushed back this weekend against attempts at conflating 1960's civil rights activism with the crybully tactics of the "snowflakes," Twitter melted down.

When one follower wrote, "Just remember that the same people that throw around the SJW stuff today would have been calling for Gene's head when you kissed Nichelle," Shatner called out the social justice left for misandry and snowflakery.

"SJWs stand for inequality, where they are superior to any one else hence my use of Misandry and Snowflake," he wrote Sunday night, adding, " Why is it that SJW's think they can align themselves with those that demanded social reform in the 60's?" (Daily Wire)

No one can question Shatner’s support for Civil Rights. The “kiss” mentioned in the above text refers to his on screen kiss with Nichelle Nichols on the original Star Trek. Which happened to be the first interracial kiss on American television. A novel thing to us today, but it was totally groundbreaking in the 60’s.

It was a big deal back then. And it’s often talked about today for how it challenged the status quo, during an important time in America’s history.

Modern leftists don’t care about how William Shatner helped break down stereotypes and furthered the cause of Civil Rights with Nichols. Because he refuses to acquiesce to their tirades today, he’s just another old, stupid, white man who should not be listened to.

The SJW statement, like everything ever posted on Twitter, was met with strong reactions from both sides. Shatner, who is very active on Twitter, engaged with a few of his critics…

Shatner also elaborated on his point a bit with a few followers. When one follower wrote, "99% of the time as soon as a SJW can label you as white, old or conservative they dismiss you w/ an insult. It's not about raising people up," Shatner agreed.

"It's marginalization; which is what they are fighting about," wrote Shatner.

One SJW wrote “Two old men agree that the youths are no good, olden days were better, that cloud needs a talkin' to…”

So if you disagree with the popular rhetoric of social justice warriors, they attack you over your race, age, or gender. Hmm… sounds pretty discriminatory to me.

It’s amazing to think that a group that claims to be fighting for equality is so quick to tear people down because of their skin color or gender. Isn’t that the very thing you claim to be against?

What else can you expect? These are the same people calling for segregated college campuses. A bit of a step back, don’t you think?

What else am I to conclude but social justice warriors are simply entitled, spoiled, selfish, hateful hypocrites?

There’s a lot about modern liberalism that I hate. It’s clear that it’s based on Socialist/Communist ideology that is not compatible with American values. I think identity politics, race baiting, feminism, and social justice are toxic evils that will destroy our society.

But I don’t hate people. And if I disagree with someone over politics, I’d never tear them down because of their age, race, or gender. What good would that accomplish?

I don’t think social justice warriors care about accomplishing anything good. If they did, they’d at least give the President of the United States a chance. Don’t agree with a policy? That’s fine. But to go on rants every time he opens his mouth, to make claims that he wanted Americans dead, to regularly call for his murder--that’s pretty damning.

Or for social justice warriors to slander an 80-year-old actor, whose accomplished far more than they can even imagine—simply because he disagrees with them? A man whose work actually helped further the cause of Civil Rights (unlike SJW’s rhetoric)? That, my friends, is simply pathetic.

Until social justice warriors can prove they are reasonable, respectable members of our society, they do not deserve our respect. Until they start treating other people the way they deserve to be treated, their arguments are worth nothing.

Until they can prove their motives are more than just tearing our society apart, dividing us, they are not welcome in the discussion.